What future for Europe's energy supply? 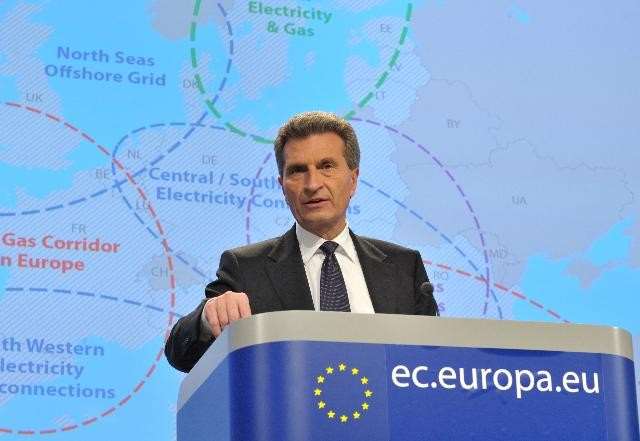 As a global leader in climate-conscious energy, Europe is looked upon as the trendsetter of sustainable practices and alternative fuels. This role, however, will be undermined if we continue on our present energy course. Over the last few decades, Europe’s domestic production of hard coal, lignite, crude oil, natural gas, and nuclear energy has steadily declined as supplies of raw materials are depleted or producers considered the exploitation of limited resources uneconomical.

To supply its energy needs, Europe has turned to the East. In 2009, roughly one third of Europe’s gas, crude oil, and coal imports originated from state-owned Russian gas monopoly Gazprom. These imports are sold under long-term contracts and thus are relatively immune to lower prices on spot markets. In order to further solidify its hold, Gazprom seeks to become one of the largest storage operators in Europe.

The Energy Policy for Europe, adopted by the European Council, rests on three pillars: security of supply, competitive markets, and sustainability. However, the current level of dependence on Russia makes the achievement of these three goals almost impossible. It is hard to imagine a competitive energy market that has only one major supplier, as is presently the case in some Eastern European countries.

In order to diversify its gas export routes and bypass the transit countries of Ukraine and Belarus, Russia has been spearheading two energy projects: the Nord Stream Pipeline and the South Stream Pipeline, each with a majority ownership held by Gazprom.

Together, the two pipelines could place Europe under the whims of Russian foreign energy policy. The recent decision by the German government to phase out nuclear power could further increase German dependence on Russian gas through the Nord Stream pipeline. Commissioner Oettinger has himself voiced the concern that the South Stream pipeline could stall attempts to bring Caspian and Middle Eastern gas into southeastern Europe, perpetuating a situation of dependence on one established supplier and one established counterpart: Russia’s Gazprom. The recent events in Bulgaria regarding its shale gas exploration are a testament to Russia’s influence in Eastern Europe.

Bulgaria buys gas from Gazprom at more than four times the price than in gas-producing countries, and is subject to Gazprom’s limits on availability. In order to break this dependence on Russian energy, Bulgaria moved to explore its shale potential. Bulgaria’s Ministry of Economy and Energy estimates it could have 300 billion to 1 trillion cubic meters. In 2011, the Bulgarian government granted Chevron an exploration license  to determine the validity of these estimates.

In January of 2012, public protests against hydraulic fracturing erupted across the country, and the parliament subsequently voted to ban the process and revoke Chevron’s license. As Ivan Sotirov, a member of the Bulgarian National Council pointed out, it is no coincidence that the action to ban hydraulic fracturing was led by three parliamentarians from the Socialist Party, all of whom have standing connections to Gazprom.

The evidence for Gazprom influence in this ban is clear and revolves around Gazprom’s  financial interests in the region. Instead of tapping into a resource that could potentially make it a net exporter of energy, Bulgaria is stuck as a mere gateway for Russian influence further into Eastern and Central Europe.

How to Avoid Bulgaria’s Fate

The rest of Europe may soon be in the same position if it does not find diversity in energy supply sources. While in 5 years time Europe will start receiving gas from the Caspian region through the Southern Gas Corridor, further diversification is needed. However, traditional suppliers are not up to the challenge: Libya is in political turmoil, the North Sea reserves are running out, and the US has no large scale export infrastructure due to the relative infancy of its shale program.

A lack of alternative energy sources does not leave Europe without options; the continent contains an indegenous natural resource that has been, until recently, uneconomical to harness. Shale gas provides Europe with a transitory energy source that will diversify its energy sources, support the EU’s longing for energy security and allow for breathing room to move towards the Energy Roadmap 2050 goals and the ultimate goal of developing renewable sources of energy as the primary sources.

Although Europe has not produced a drop of LNG domestically from oil shale, the EU’s gas supply has already benefited from shale gas. Cheap natural gas destined for an oversupplied US market has re-routed to Europe, providing competition for the more expensive Russian supply. This greater availability of cheaper short-term and spot market gas means that renegotiations of terms between Gazprom and its European customers will be more frequent, and Europe will have more bargaining power in determining the price, volume, and length of these energy contracts.

There is no clear-cut path that will magically lead Europe to energy independence by the middle of the century. The European Union as a whole and each Member State individually must begin to lay the groundwork needed to achieve this goal now. The first step of this process is breaking free of Russian energy dependence, diversifying energy imports, and utilizing available alternative domestic sources. With these projects underway, the European Union will have the breathing room needed to begin implementing policy to further the goals outlined in the Energy Roadmap.