A spoof advertisement has been circulating on twitter, purporting to represent the views of Leave.EU, one of the UK’s rivalrous Brexit campaigns. It would be blackly comic, were it not also potentially tragic. It is likely that the spoof was created by a disgruntled rival Eurosceptic campaigner who is not a party to the main campaigns. For the disgruntled rival, the intended rebuke is that Leave.EU is exposing the Eurosceptic cause to rebuttal by not presenting any thought-through alternative to EU membership. The potential tragedy for the rest of us is that two major campaigns to leave have been launched in the UK without being based on any serious analysis of the economic alternatives. 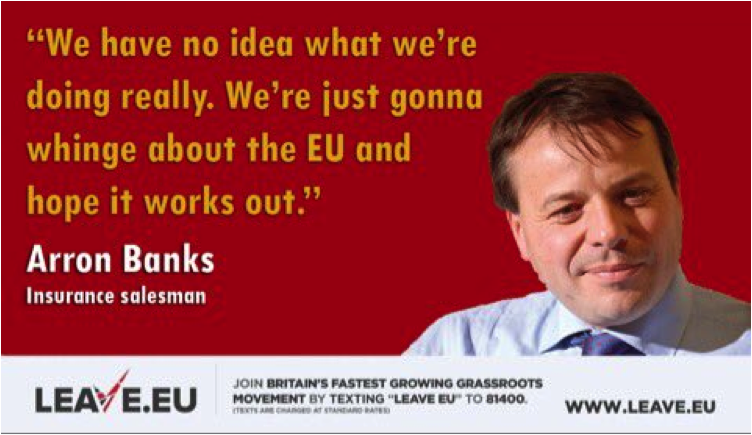 The rival campaigner appears to think it is negligent that Leave.EU do not have a proposed alternative and as a consequence “out” is being put at risk of challenge. We think all sceptics have their reasoning backwards: what should matter is the well-being of the UK as a whole; the true negligence lies in proposing a major shock to the British economy such as leaving the EU and having nothing better as an alternative than hoping that “it works out”. It may help to own a hedge-fund (as is the case for key backers of the out campaigns) to have this degree of insouciance towards the effects of serious economic disruption.

While Leave.EU and Vote Leave would no doubt not wish to see their campaigns characterized in this way, the spoof is effective precisely because it does capture the essence of those campaigns. The out campaigns focus on what they claim are the costs of the EU for the UK without providing realistic net assessments which balance costs and benefits. The intention is to run a campaign based on resentment of perceived faults and injustices. In this sense, their campaigns are not dissimilar to that run by the proponents of Scottish independence in 2014. They have the advantage of contrasting a dream of independence with the frustrations of prosaic reality. However, this approach also has the major disadvantage that the bubble may be punctured - if assessment proves that the realistic alternative to the current status quo is not the inchoate dream proposed, but a set of fairly predictable and less attractive outcomes.

If Vote Leave and Leave.EU fight shy of putting forward their actual alternative now, out campaigners have in the past suggested a range of different alternatives to EU membership for the UK. The most feasible comprise membership of the EEA, like Norway; a set of bilateral deals akin to Switzerland; a special UK deal negotiated post a Brexit; and, simply relying on WTO trading arrangements. The author of the spoof likely favours copying Norway as the path for the UK. In “What does Out look-like” published by Policy Network, Labour’s Shadow Europe Minister Pat McFadden and myself analyse in detail whether these are serious and attractive alternatives for the UK. They are not and the degree to which they are not certainly suggests that eurosceptics arrive at economic evaluations in order to justify pre-formed political beliefs about the EU rather than making a political evaluation after undertaking an objective economic assessment.

There is nothing to recommend the Norwegian model for the UK. And unsurprisingly, the British prime minister recently attacked the suggestion as lacking seriousness. As he has correctly pointed out, if that was the road the UK went down, we would have to abide by the rules of the Single Market with no substantive ability to influence those rules. We would also continue making a financial contribution to the EU budget that was little different from today.

The Swiss arrangement is essentially the Norway model piece by piece. It is a series of agreements that took a number of years to negotiate and does not include free movement of services (except life-insurance) and capital. This was contrary to what the Swiss hoped to negotiate and helps explain their trading deficit in services (as well as with goods) with the EU. The package leaves Switzerland “autonomously” having to comply with EU law to obtain access to the single market in goods and with no say on the content of EU law.

Some sceptics have argued that the UK could just rely on WTO trading arrangements. A view which has been eased by incorrectly assessing the extent to which UK firms could receive state subsidies to compensate for EU tariffs. It also relies on a magical belief that the UK would be able to strike preferential trade deals with emerging markets which neither the EU nor the US, despite their greater economic clout, have been able to agree. And relies on a further untested assumption that the UK would simply inherit all the bilateral deals to which it was party as an EU member, trade deals which cover 60% of UK exports, and 85% if the EU-US trade deal comes to fruition.

According to some sceptics, the size of the UK’s trading deficit with the rest of the EU, ensures that it should receive a special deal which would allow it to pick and choose which Single Market and flanking rules it applies. This ignores the fact that the Swiss and UK trading deficits are of almost identical absolute size, and Switzerland does not seem to have acquired this ability. It also ignores the fact that the UK is far more dependent on trade with the EU than the EU is dependent on trade with the UK – a fairly telling dynamic for a trade negotiation. It also ignores the actual decision-making rules for a deal with the UK. These imply that the views of a few EU countries with industries which have important export markets in the EU would not dominate the negotiation process post-Brexit.

A fantasy of many sceptics is that a special trade deal would allow the UK to undercut European producers by scrapping environmental protection and social rights. Reading blogs would lead one to suspect that in many cases it is hostility to European rules in these areas that has driven dislike of the EU in the first place. This may be part explanation for the political impulse that leads these commentators to eschew unbiased overall macro-economic analysis. The true goal for many sceptics may be a redistribution of protection and wealth away from employees in the UK rather than anything more elevating.

For many E-Sharp readers, it may seem fantastical that a modern European country could so casually put its well-being at risk in pursuit of pipe-dreams. Nonetheless, the referendum is happening and large resources are being ploughed into the out-campaigns to exploit the current climate of popular dissatisfaction with political and economic elites. Pat McFadden and I have sought to supply some reasoned analysis, but ultimately those who wish to see the UK remain in the EU will have to match the effort and resources of those who have dedicated themselves to pursuing out.