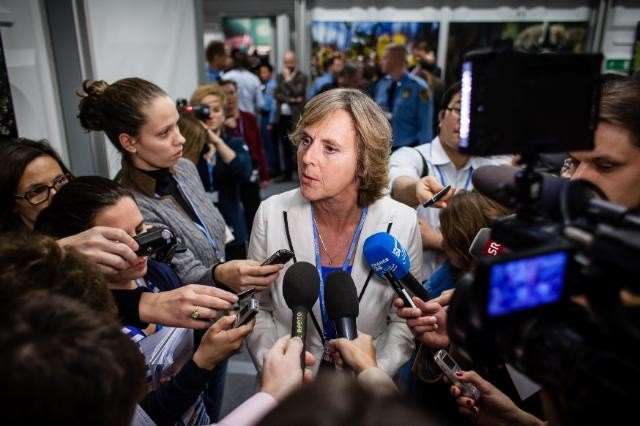 As nations negotiated on a process for a new global agreement to tackle climate change in Warsaw, the specter of Typhoon Haiyan and other extreme weather impacts loomed over the conference. Meanwhile, new science brought an understanding of how we can quickly reduce a significant share of the damaging climate pollution at little expense and with minimal political conflict: Nations have an opportunity to hugely reduce climate pollution through better management of waste in landfills around the globe.

Scientific research has shown that cutting short-lived climate pollutants (SLCPs) like methane, hydrofluorocarbons (HFCs) and black carbon soot, is key to avoiding near-term warming and climate tipping points. Each of these pollutants can be significantly reduced through a more effective management of our waste. Indeed, as a recent paper in Nature Geoscience explains, cutting SLCPs can cut the rate of global warming in half, and the rate of warming in the Arctic by up to two-thirds. We already have the technologies we need to do this, and the laws and institutions too in most cases.

Reducing HFCs can be done under the Montreal Protocol, which is widely recognized as the most effective and efficient environmental treaty ever established. The treaty has phased out nearly 100 percent of 98 chemicals that both damage the ozone layer and cause global warming. The climate benefits have been five to ten times more than the Kyoto Protocol climate treaty has been able to deliver.

HFCs are man-made greenhouse gasses (GHGs) used primarily in refrigeration and air-conditioning. Millions of tons of this super greenhouse gas are currently leaking from castoff air conditioners and refrigerators buried in landfills around the world. Action under the Montreal Protocol can prevent this and avoid the equivalent of 100 billion tonnes of carbon dioxide by 2050, and up to 0.5°C of global warming by 2100, a substantial part of what must be done to keep the planet safely below the 2°C guardrail.  In the meantime, HFC emissions that otherwise would go into the waste stream can be captured with collection programs.

When buried in landfills our waste also causes one third of all anthropogenic methane emissions globally. We have the technology to drastically reduce this and can do it quickly. What we lack is the appreciation of how important this is for climate protection, and the political will of local governments to act. Funding also will be important, including from the new methane fund the World Bank is setting up.

In most of the world, methane exists in uncontrolled landfills without methane capture and inopen dumps, where it escapes into the atmosphere. Today, emissions of methane from biodegradable waste are producing the equivalent of one billion tons of carbon dioxide annually, responsible for about three to four percent of global climate emissions.  But worse is yet to come.  Estimates suggest this amount will treble as uncontrolled dumping increases in developing countries over the coming two decades.

By closing these waste sites and extracting the methane to produce energy, we can significantly cut GHG emissions as the EU has already shown. The original EU 15 countries will achieve 18 percent of their GHG emissions reductions target by 2020 by reducing methane and other emissions from waste.

The third climate pollutant from waste is soot, or black carbon, some of which is created by burning waste.  New studies show that soot is the second most significant climate pollutant after CO2.  Soot traps heat in the atmosphere and causes additional warming when it settles on ice caps and glaciers, speeding the melting process.  Further, soot is damaging local air quality, food production, and public health, causing millions of premature deaths a year mainly from respiratory and cardiovascular diseases. And we sometimes forget that waste burning is now responsible for 80 percent of developing countries' dioxins emissions, another global health issue.  Because black carbon remains in the air only for a matter of days to weeks, cutting emissions produces fast benefits, and mostly in the regions making the cuts.

Using the Montreal Protocol to phase down HFCs, and intervening rapidly to stop landfill methane and black carbon soot emissions are critical strategies for addressing near term warming. These efforts should be applauded and considered by nations as they progress their work towards a new global agreement to tackle climate change in Paris in 2015.