Time to reconcile the financial and climate crises 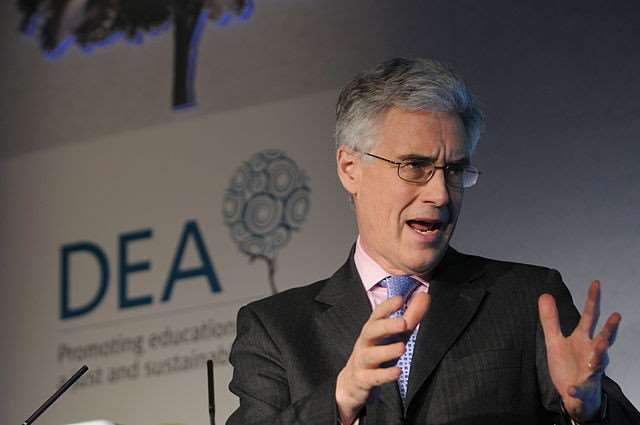 Adair Turner, the former head of the UK's financial regulator and of the UK Committee on Climate Change. Photo: Wikimedia Commons

Four years ago I asked Lord Turner – who was at that time both Head of the UK’s financial regulator and the UK’s ‘climate regulator’ the Committee on Climate Change – how much time he was spending on the financial versus the climate crisis. The answer – perhaps not unsurprisingly given we were in the middle of a financial meltdown – was one day a month on the climate crisis and the rest of the time on finance.

Four years on, the immediate threat of complete paralysis in the financial system has passed. Yet its effects linger on in the form of stifled investment and low growth expectations both in the UK and in Europe as a whole.  In the UK second quarter growth was 0.7% of GDP, but business investment fell -2.7%, reflecting low confidence. At a European level, while there are the beginnings of a recovery growth is also weak – reaching 0.4% of GDP in Q2 2013, with business investment just easing into positive figures at 0.4% (up from -1.8% previously).

The irony in all of this is that this bleak investment outlook exists just at a time when record levels of capital need to be deployed. We are on the cusp of a period of transformational change in the global economy – as we shift from a focus on deploying high carbon to deploying low carbon infrastructure. There is a whole wealth of data linking infrastructure investment to growth. And yet governments seem incapable of grasping the opportunities in front of them to drive this growth, create jobs and deliver prosperity.

As an example, a quick examination of the UK’s infrastructure financing needs – estimated by Infrastructure UK at £40bn–£50bn every year over the coming decades – indicates 70% could be delivered as low carbon or low carbon-enabling technologies. Superefficient buildings, smart grids and renewable power generation to name a few. This is not a subsector of a subsector of the economy – the infrastructure challenge is the climate challenge. Energy policy is climate policy.

Across Europe, there is a similar story: with around €8.6tr needing to be invested to meet existing 2020 decarbonisation targets. The capital requirements are immense, but there is money to deploy. Globally we have a glut of savings. What we need is a good place for that money to be deployed. A plan for low carbon investment, backed by public finance and smart policies to lever in private capital, could create demand in low growth economies and a routemap to economic recovery.

But some of the most crucial decisions that will determine whether this potential can be delivered now lie in the hands of the European financial regulators. It is the financial regulatory environment that will - alongside energy policies - determine whether sufficient funds can be deployed to low carbon assets.  Regulations are currently in a state of flux, as the final response to the financial crisis is formulated. The proposals as they stand will inadvertently result in a shift towards short-term investments − and away from investment in long-term low carbon infrastructure assets which by their nature have long investment timelines.

What emerges from this analysis that there is a clear need to ensure coherence between financial regulation and low-carbon objectives: a new and sustained dialogue about cross-sectoral regulatory coordination. The European Commission’s Green Paper on Long-Term Finance is a start, but this should be augmented by requiring institutions like the European Banking Association, the European Pensions Regulator EIOPA and the European Central Bank to be charged with assessing the interactions between financial markets and climate change policy objectives.

If we don’t there is a real risk that overly onerous financial regulation will choke off the supply of credit to the emerging businesses that will ultimately drive sustainable growth. It will also penalise long-dated investment in low carbon infrastructure and infrastructure-backed assets, so cutting out the capital markets – and institutional investors – that are necessary to achieve scale.

To be fair, the European Commission’s consultation on Long-Term Finance has thrown light on some of these issues. But there is as yet no clearly identifiable way forward: Solvency II should have been implemented in 2012, this has been delayed … again ... New proposals have yet to emerge.

Putting this slightly gloomy analysis aside, however, there are also some reasons to be cheerful: signs that the financial sector is already reorganising, despite the uncertainties. Here are four examples:

First, the recognition by several major governments that a dedicated institutional response to the low carbon investment challenge is needed. The UK’s Green Investment Bank (GIB), first of a kind in the world, is already shaping the UK low carbon investment universe and drawing in new private sector players. In April Masdar – the UAE’s state-backed renewables financing company – announced it is exploring coinvesting £1bn with the GIB in UK clean energy. The case for the GIB is compelling and has been taken up in a number of countries. Australia has a Clean Investment Finance Corporation, directly modelled on the GIB, and funded by revenues from carbon trading. The French Government is setting up a new dedicated infrastructure bank la Banque Publique d'Investissement whose reputed role will be to assist with financing low carbon infrastructure.

Second, signs within the institutional investor community that they need to be shapers of their future investment opportunities. This group of investors has tended to be passive in the policy debate. We are seeing increased shareholder activism but also clear shifts in the attitude of some institutional investors to infrastructure investment – which is a way of bypassing banks financing for more mature infrastructure assets. In 2010 PGGM and Ampere Equity bought an equity stake in Walney Offshore Windfarm, which is owned by DONG energy. Borealis Infrastructure, the infrastructure investment arm of the Ontario Municipal Employees Retirement System (OMERS), entered into a joint venture with the Ontario Teachers' Pension Plan to purchase HSR1 − the link between London and the Channel Tunnel. More recently, in the past few weeks the Prudential announced it will be moving back into the residential property market as a landlord, after an absence of 30 years.

Third, signs from within the energy industry that approaches to investment are changing. At a recent renewable energy financing conference, energy company Eon talked about a shift in thinking about how they finance renewables. Because of balance sheet constraints the focus is moving from building, owning and operating windfarms to a model whereby they build, sell-on windfarms, retaining only a small equity stake and rights to buy the power generated. They see their ‘unique selling point’ in the market as increasingly being the ability to develop and sell-on renewable energy assets.

Fourth, the emergence of a cohort of progressive private sector bankers willing and able to engage with the investment challenges implicit in the low carbon economy. I evidence here the efforts made by members of the Green Deal Finance Company in the UK and the similar initiative in the Netherlands, the Nationaal Fonds Energiebesparing. These are some of the good guys – and we’d like to see a lot more of them.

So to sum up: change is afoot, but we need to build on that momentum through closer dialogue between financiers and policy-makers and between climate regulators and financial regulators to ensure that our financial system is fit to help deliver our low carbon transformation and route to global prosperity.