The two populist tribes of Brexit

The rise of populism has variously terrified, delighted and obsessed politicians around the world. As Britain heads for an early general election, in which the choice of populist voters could be decisive, new research finds that there are two distinct populist tribes, not one.

This emerges from a forthcoming ten-country study of populism by the Carnegie Europe think tank in association with Citibank. The Sunday Times has been given exclusive access to the key findings from Britain.

These show that fears about stalled living standards and the decline of traditional values are, indeed, widespread – but that economic and cultural discontents operate differently among the two tribes. One consists of “economically angry” (EA) voters who are hard up, feel worse off than their parents and say they have no stake in society. The other consists of “culturally traditional” (CT) voters who think national values have declined, feel uncomfortable hearing foreign  languages spoken in Britain, and want children to respect their elders. Almost all populists belong to one tribe or the other; few belong to both.

One big reason why the Leave campaign won the Brexit referendum three years ago is that it appealed separately to both tribes. Well-heeled CT voters in the Tory shires had little in common with struggling EA voters in Labour’s heartlands, except that both voted to leave the EU.

The survey by Deltapoll of more than 2,000 Britons finds that EA voters tend to be younger and more left-wing than the electorate as a whole, while CT voters are older and more right-wing. 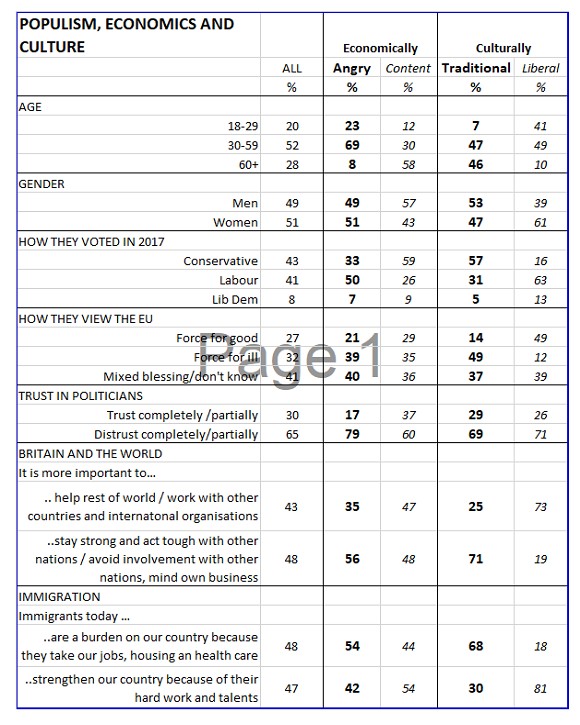 The differences on immigration are more clear cut. Financial circumstances make little difference: voters who are economically angry divide fairly evenly between pro- and anti-immigration attitudes – but so do those who are more content with their lot. However, cultural traditionalists divide more than two-to-one in saying immigrants are a burden rather than a blessing – while liberals divide more than four-to-one in the opposite direction.

So, if economics has only a weak link to attitudes to immigration, how come that is seemed to deliver Leave majorities in so many of Labour’s hard-up heartlands? This new research suggests that the cultural argument – “take back control” – worked better than the economic argument – “EU workers are driving down wages”.

By the same token, the nationalist case for British “independence” – that it’s better to steer clear of international engagements than to co-operate with other countries to solve shared problems – has more appeal to CT than EA voters.

The main reason why the Leave campaign won over EA voters is that it tapped into their disenchantment with our politicians. As a country we have little respect for our MPs; but the intensity of EA disenchantment is remarkable.

Among voters as a whole, 30% distrust politicians “completely” (while another 35% distrust them “partially”). But among EA voters, the figure for “distrust completely” rises to 59%. CT voters come far closer to the national average: 35%. For voters in cities such as Sunderland, support for Leave was a product of a deep alienation from our political classes as whole, rather than a specific fear of immigrants taking British jobs.

What lessons does all this have for our parties as they gear up for a general election? Two years ago, the Conservatives won clear majorities of CT voters, and also the economically content. However, although EA voters backed Labour over Tory by 50-33%, the fact that the Tories attracted as many as one-third of EA voters helped them to win a handful of traditional Labour seats such as Mansfield.

The challenge for the Conservatives at the coming election will be to build on its support among EA voters. The extra spending promised for the NHS and other public services may help; but could this be undermined by fears of a post-Brexit recession, costing jobs and denting living standards?

Some moderate Tories fear that by edging out the party’s more liberal, one-nation MPs, the party could lose its more liberal voters. The truth is that such voters have already departed: only 16% of cultural liberals voted Conservative at the last election. Should the Tories write off its losses and concentrate on consolidating its culturally traditional base– or expand its appeal to win back liberally-minded voters?

As for Labour, its domination of the culturally liberal vote (a 47% lead over the Tories) is far greater than its 17% lead among EA voters. This helped it win seats such as Canterbury and Kensington two years ago, while the party slipped back in the economically hard-up areas it used to dominate.

But Labour also won the support of one in three CT voters. The more it appeals to cultural liberals, the greater its risk of alienating  the votes, which it still needs if it is to win the coming election, of working class voters with more traditional values.

A version of this article recently appeared in The Sunday Times