After Ukraine’s stubborn resistance denied Russia an easy victory in the early days of its invasion, the sentiment in London, Berlin, Paris, and Washington has transformed from despair to belief in a possible Ukrainian victory. Increasing quantities of heavy weapons deliveries reflect this optimism, even in the face of recent Russian progress in the east. Recently, a chorus of prominent commentators, foreign policy experts, and newspapers have stated bluntly that “Ukraine must win.” Western leaders have been encouraged to adopt this rhetoric and UK Prime Minister Boris Johnson even reportedly pressured Ukrainian President Volodymyr Zelenskyy not to pursue peace talks with Russia. Despite increasingly confident and bellicose rhetoric, few of these proclamations account for the political and military constraints that the Ukrainian leadership faces. Indeed, abstract notions of “justice” or “peace” fail to account for the irreconcilability of certain goals and the limits of European agency in the conflict. To address this, this piece discusses the tensions between different outcomes and proposes a “trilemma” to understand potential tradeoffs.

To grasp the possible endgame scenarios—and the European Union’s role in reaching one—three questions in particular stand out. What do Western leaders want? Is this even as acceptable question to ask? And what does “victory” look like? All three evade easy answers and divisions as to the correct approach suggest that Western unity—which was enthusiastically touted at the outset of the conflict—may be less durable in the long run. Furthermore, these opinions often rely on abstractions and vagaries, with little accounting for what is possible, not just desirable. To address these flaws, each of the three questions warrants a closer look.

Two distinct perspectives have emerged in NATO capitals as to the West’s ultimate objective in the war in Ukraine. The United States has adopted a harder line, hinting at regime change in Russia and seeking a long-term deterioration of the Russian state. US secretary of defense Lloyd Austin argued that “we want to see Russia weakened to the degree that it can’t do the kinds of things that it has done in invading Ukraine.” French President Macron has taken a far more conciliatory approach, warning that Russia should not be “humiliated” and advocating for continued dialogue with Russian President Vladimir Putin.

A third pole of the debate, claiming that Ukraine alone should dictate the circumstances of the end of the war, has emerged from Warsaw. Polish President Andrzej Duda recently argued that “only Ukraine has the right to decide about its future” and criticized the “worrying voices” of other leaders who suggested that Ukraine might have to make some concessions in order to achieve peace. Others have criticized this view, pointing that the massive quantity of Western aid to Ukraine necessarily warrants some influence over the war’s outcome. For example, this opinion was prevalent at a recent roundtable discussion at the Foundation for European Progressive Studies in Brussels.

Finally, there has been little consensus on what Ukrainian “victory” looks like. Should Russia merely be pushed back to its pre-February 24th borders? Should Ukraine try to retake Crimea, or even strike targets within Russia to erode its warmaking ability? What are the costs of pursuing these maximalist goals? This final question now looms ever-larger. With food and gas prices spiking worldwide, the threats of food insecurity the Global South, political turmoil for the US Democrats in the midterm elections, and financial difficulty for Europe’s households (especially once winter sets in) again have become more immediate.

To add some clarity to these debates—and assess whether some are even worth having—I propose a “trilemma” of outcomes. It’s a simple heuristic but does lend some needed perspective to Western leaders’ grand proclamations about how the war in Ukraine can and should end. I propose that there are three main characteristics of any settlement that Europe could support: alignment with EU interests, domestic acceptability in Ukraine (an important condition, given the strength of ultranationalist extra-parliamentary groups), and military feasibility. Any peace can likely only possess two of these characteristics, constraining the West’s maneuver far beyond what they would hope for. Figure 1 details these dynamics, as well as possible combinations. 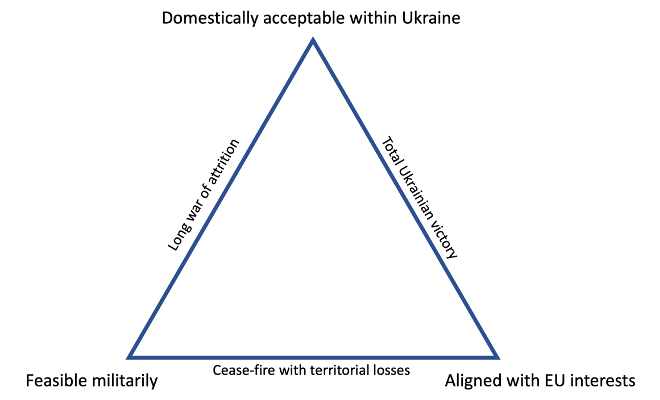 Clearly, the EU would prefer an absolute Ukrainian victory, expelling Russia, ending the war, and continuing Ukraine’s process of moving closer to the West. However, even considering substantial weapons deliveries from both the US and EU and crippling sanctions on Russia, a total Ukrainian victory (of any sort) remains unlikely. As US General Stephen Twitty recently argued at the Council on Foreign Relations, “there’s no way that the Ukrainians will ever have enough combat power to kick the Russians out of Ukraine.” While the optimistic case that more advanced weapons may alter this battlefield reality, for now the impossibility of a complete victory leaves only two realistic options.

First, the war could settle into a long and attritional conflict. Russia’s slow progress and Ukraine’s increasingly formidable defensive arsenal make this stalemate scenario a distinct possibility. Moreover, domestic pressure on Zelenskyy not to accept significant territorial losses may make a simmering conflict more palatable politically, even in the face of mounting battlefield losses. This would be a difficult outcome for Europe. With dependency on gas (and proximity to many regions most affected by food shortages) still a major issue, the EU is far more susceptible to the collateral effects of the war than the US. This divergence of transatlantic interests could eventually result in political divisions, as the US would be far better suited by a protracted conflict than Europe, in spite of rising inflation.

Alternatively, Ukraine could accept a ceasefire in the near future, likely involving the loss of substantial swathes of territory. This may be in the EU’s interest (especially for the countries more reliant on trade with Russia) but is unlikely to be palatable to Ukrainians. With an increasingly militarized society and many well-armed rightist groups, any resolution deemed as “appeasement” could spell the end of Zelenskyy’s government. The hope of more and more advanced weapons deliveries may also make this outcome politically infeasible. This leaves Ukraine—and the West—with a dearth of acceptable options.

Are these constraints immovable? Likely not. The situation on the battlefield may suddenly shift, sanctions may eventually cripple Russia’s warmaking ability, or Zelenskyy may decide he is willing and politically able to accept territorial losses. Still, the essential logic reflects the broad outline of the current situation, one that is unlikely to change soon.

This piece specifically does not advocate for any particular approach to ending the war. Rather, it intends only to shed light on the difficult choices faced in Western capitals. There’s no easy way out of this conflict and arrogant proclamations of total victory or glib pronouncements that Ukraine should willingly accept substantial territorial losses ignore the material and political constraints on the ground. The sooner that our political discourse can acknowledge these tensions, the better.