The new debate on net neutrality 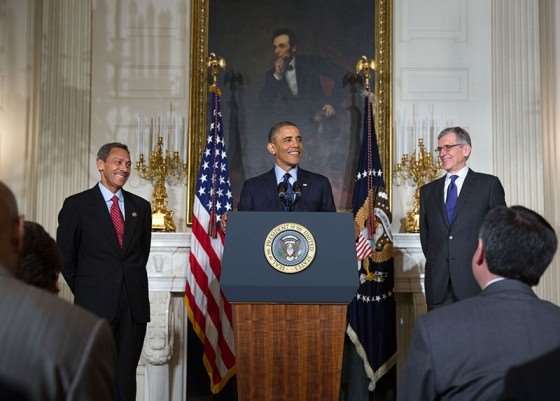 President Barack Obama and Tom Wheeler, chairman of the FCC on the right. Photo: The White House

The President of the United States has publicly urged the Federal Communications Commission (FCC), the independent regulator, to create a new set of rules to protect net neutrality, extend the concept to mobile connections, and ensure that neither telephone companies nor cable operators can block or limit access to web sites and services.  Obama has underlined that the principles of freedom and neutrality governing the Internet since its beginning cannot be taken for granted and are key to ensuring that Internet citizens continue to have access to what has become a vital service for citizens.

In his statement, Obama unveiled what he regards as a common sense list of proposals:

The principle of net neutrality means that all Internet traffic should be treated equally, i.e. that no data packet should be favoured or discriminated against other data packets transferred over the Internet via computers, modes of communication, content, sites or platforms.

Although this principle is essential for an open, free and robust Internet, it is not safeguarded in any regulations worldwide. There are precedents for cases in which service providers deliberately slowed data flows to popular websites in order to extort more money, and other prioritized data services due to business relationships. An example of this was Comcast’s slowing of traffic promoting Netflix. Unfortunately, if adopted by the FCC, the President’s proposals would do tremendous damage to the Internet tearing up of a policy in place since the Clinton administration, subsequently upheld by the Supreme Court and strongly supported by Congress for nearly a generation. It would impose a regulatory straightjacket on the internet developed for nascent telephony in the 1930s and not the 21stCentury digital technology. Such a drastic move should be submitted to Congress for scrutiny rather than purely being a matter for the regulator.

The light touch framework that the President is seeking to replace has encouraged levels of investment unprecedented by any industry. It has been an example for other countries to follow due to the resulting rapid deployment of broadband infrastructure and levels of innovation in the US, which is far beyond the level of deployment in Europe. If enacted, the President’s position would put all of this at risk. It would negatively impact investment and innovation, not just in the US but in the wider global economy. It is surprising that the White House is willing to risk damaging the US and global economy in response to political pressures from groups who want use government to exercise greater control of the internet.

Consumers want reliable broadband access and Internet services for employment, health, education and leisure. However, only private investment and a and stable light touch regulatory framework will ensure the expansion of broadband. It is essential to find the right balance to preserve an open Internet, while ensuring that private companies can invest so as to give consumers access to robust broadband infrastructure and services that they want. President Obama’s proposals would undermine the stability of the regulatory framework necessary for this investment to happen.

Recently, in Santander, Cesar Alierta, chairman of Telefonica, claimed that "those who speak most of neutrality are not respecting privacy and safety" - referring to service providers such as Google, to defend this argument, he claimed that the concept of neutrality "was invented by those without neutrality. Vittorio Colao, CEO of Vodafone, has advocated some kind of segmentation that allows the prioritisation of important messages and services: "You do not want to be in a self-drive car, reach a traffic light and the network is congested. You do not want to see a car coming at you and say, yes, viva net  neutrality!  Music, a self-drive car? Who cares? All packages are the same! I wouldn’t want to be in that car "