The EU neighbourhood in shambles 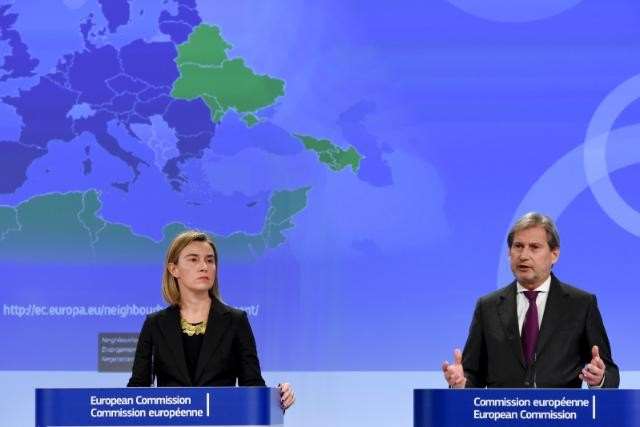 Earlier this month EU High Representative for Foreign Affairs and Security Policy Federica Mogherini and EU Commissioner Johannes Hahn launched ideas on the EU strategy towards its neighbours in the east and south. Over the next months, these ideas need to be filled with concrete proposals for measures to be taken to make the EU’s policy towards its neighbours meaningful and effective.

What was considered a “ring of friends” has become a “ring of fire”: be it the Russian-Ukrainian conflict, the war in Syria or the ongoing turmoil in Libya, or be it political instability in Egypt and Lebanon. Even Moldova, former model student in the east, after the recent elections seems to lose touch with the EU.

An “arc of instability” stretching from the EU’s eastern borders down to the Mediterranean basin has undermined its flagship European Neighbourhood Policy (ENP). This policy was designed to deliver prosperity, stability and democracy to countries surrounding the EU. It has manifestly failed and needs to be radically rethought.

Mogherini and Hahn have now emphasized the need for dialogue with the ENP partner countries. “The new ENP must reflect the views and experience of our partners. It must not be patronising and condescending", said Hahn on March 4.

In fact, as a recent publication (The EU neighbourhood in shambles – some recommendations for a new European neighbourhood strategy https://www.bertelsmann-stiftung.de/en/publications/publication/did/the-eu-neighbourhood-in-shambles/) of the German Bertelsmann Stiftung maintains, the EU ought to abandon the very concept of a homogeneous ‘neighbourhood’ in the face of glaring differences among the 16 countries affected, not least because some are uninterested in reform; others may even be failed states.

Yet Commissioner Hahn also added that the EU must "stress its own interest when it discusses with its partners". Unfortunately, EU member states are themselves pursuing divergent interests and goals which does not really facilitate dialogue with partner countries. Even more unfortunate is that different policy-making stakeholders within each individual EU member state do not always seem to agree on what policy to pursue.

A fundamental review of the ENP should lead to more differentiated, targeted measures to promote “transformational change” within neighbouring states ready to accept it. As a by-product, such measures would contribute to the newly stressed but self-evident goal of protecting Europe from the consequences of the instability in its neighbourhood.

According to the Bertelsmann Stiftung paper, the EU should offer revised incentives such as participation within the proposed ‘energy union’ or freer trade designed to aid local economic development.

Other, and immediately effective, concrete measures are recommended: Existing visa regimes ought to be individually revised. Migration needs to be regulated in a much fairer way. Education and professional training in many countries ought to be managed and supported; student exchange programmes such as ERASMUS would be starting points which could fairly quickly and at rather low cost be adapted to the needs of neighbouring countries and their youth.

Such measures could, ultimately, help to fulfill Hahn’s demand that the EU, in the future, puts "a new emphasis on energy security and organised crime", as well as “terrorism and the management of migration flows”.

A new ENP should embrace a wider range of actors, including civil society, promote entrepreneurship and help reform countries’ police and military forces.

Dialogue with “the neighbours of the neighbours”, or more precisely, other actors working in the region, needs to be strengthened, i.e. the US, Turkey, Iran, the Gulf states, and, of course, with Russia, once a modus vivendi with Moscow is found against the background of the conflict in Ukraine. This is not only in the interest of the neighbouring countries, but also in the EU’s and those actors’ own interests.

However, managing the major challenges must not be delegated to these states. Their views and aims do not always coincide with Europe’s (assuming the EU has a common view on given issues).

The upcoming ENP review should reassert common EU institutions in negotiating and working with partner countries and give them a central role in preventing and resolving conflicts as well as promoting democratic reform and economic stability. This revised ENP should help underpin the EU’s efforts to forge a genuine Common Foreign and Security Policy. As the Bertelsmann paper concludes, “as long as the EU fails to take security-policy and geopolitical interests of these countries into account and answer the needs resulting from them, the ENP tools … cannot take effect. Any efforts to support the transformation of states around us towards peace, stability, democracy and economic welfare must be based on and backed by a truly common European foreign and security policy, which is, sadly, still lacking.”

Against this background, explicitly separating the ENP consultations from the CFSP review process does certainly not lead into the right direction.