The elephant in the room: a Republican Congress and transatlantic relations 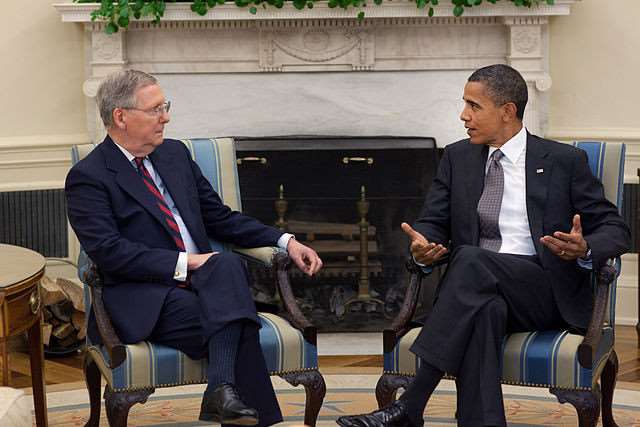 The results of last week’s Congressional vote herald big changes in Washington that will also impact Europe. The Republicans, who have spent much of the Obama presidency as obstructionists, must demonstrate an agenda and an ability to lead. President Obama, for his part, must be more willing to work with them if he hopes to achieve anything during his final two years in office. Divided government often makes strange bedfellows, but it also opens the door to new opportunities. These may include an overhaul of US policy on three key elements of trans-Atlantic collaboration: trade, the crisis in Ukraine, and nuclear negotiations with Iran.

For more than a year, the US and the EU have been negotiating a Transatlantic Trade and Investment Partnership (TTIP), a free-trade agreement that seeks to increase market access, eliminate unnecessary regulatory hurdles, establish rules to serve as the global standard for future trade agreements. The outgoing Democratic Senate leadership has expressed reservations about aspects of this item on the president’s trade agenda. But early indications suggest that the incoming Republican majority may be more amenable to the White House’s support of TTIP.

But President Obama cannot take for granted Republican support. Several potential landmines lurk, and they could scuttle the effort. One is granting the president Trade Promotion Authority (TPA), through which Congress establishes its priorities in lieu of amending a deal that the president’s negotiators have concluded. TPA would strengthen the American negotiating position, but distrustful Tea Partiers (and anti-trade Democrats) could stymie TPA passage, plunging TTIP into doubt.

Still, Republican leaders appear poised to adopt the White House trade agenda to achieve two goals. Supporting TTIP would demonstrate that the GOP can lead a “do-something” Congress that helps American workers. This, in turn, would provide the party with fodder heading into the 2016 presidential election. Finding a filibuster-proof coalition of pro-trade Republicans and moderate Democrats should be achievable for the new Congressional leadership, and the White House would be well served by working closely with Senate Republicans to secure TTIP approval if it comes up for a vote.

Engagement in the East

Ukraine is among the many global hotspots that have been stern tests for the Obama administration’s foreign policy. Calls to impose sanctions on Russia had bipartisan support, while legislation to provide the new pro-Western government in Kyiv with political, technical and economic support (including $1 billion in loan guarantees) was overwhelmingly passed in the House and Senate.

The GOP has nevertheless been largely critical of the administration’s handling of the Ukraine crisis. Republicans have lambasted the president for not taking a stronger stand against the Kremlin. Senators John McCain and Bob Corker are among those who have also attacked the administration for failing to provide lethal military aid to Kyiv. McCain described as “shameful” the administration’s reluctance to do this, while Corker introduced legislation to arm Ukrainian forces with defensive weaponry. With Republican control of the Senate and a potential chairmanship for Corker on the powerful Foreign Relations Committee, President Obama may find it difficult to continue limiting US support to non-lethal aid.

Time’s Up for Tehran

The ongoing negotiations with Iran over its nuclear program could benefit from a sense of urgency that a Republican majority in Congress injects into the process. With an effective interim agreement in place and a looming deadline for the talks’ conclusion, the GOP may find a final accord politically perilous to reject. Iran will be a hot-button issue in the 2016 presidential race, and it would behoove the party to share in a significant foreign-policy success. Failure to achieve a settlement in the coming weeks, however, may leave the door open for a more conservative Congress to dismantle the progress that has been made.

The current Senate majority leader, Harry Reid, resisted calls from both parties to introduce new sanctions on Tehran. Incoming Leader Mitch McConnell has shown no such reluctance. Earlier this year, he authored a letter condemning Reid for failing to bring a sanctions vote to the floor and indicating a willingness to do it. The threat of additional sanctions at this delicate moment, however, could undermine the unified trans-Atlantic approach that helped bring Iran to the negotiating table in the first place.

This week’s election has been described as everything from a Republican wave to a tsunami. Hyperbole aside, the vote certainly ushers in a power shift on Capitol Hill that will have international consequences. As the trans-Atlantic relationship is highly susceptible to such directional changes in Washington’s political winds, Europe should brace itself. The emerging political climate may presage a more globally activist US. Failing that, there is the prospect of more gridlock on the road to relative decline. Europeans need to be prepared for trans-Atlantic challenges either way.