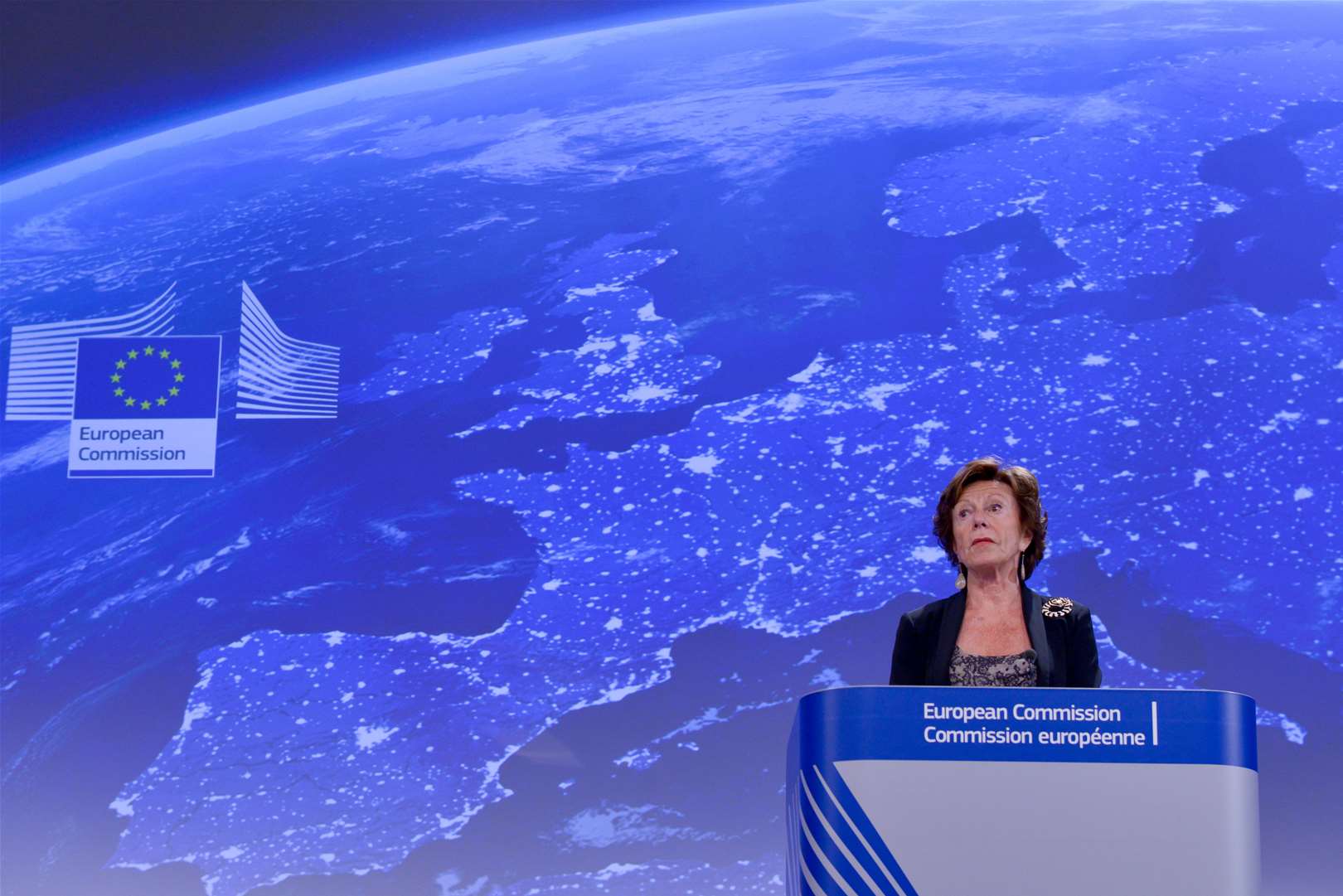 We face a dilemma in the digital age. We know in our heads that technology must progress and that each day we enjoy the convenience and the productivity of new devices and services, but questions remain unanswered in our hearts.

Europe is not a low-cost economy and does not have a high-risk culture; this leaves us anxious and vulnerable in the face of giant American innovators and ceaseless Asian factories. We know also that life was fine before the internet. Where is the romanticism and luxury in a life based on pixels? Why the merging of public and private lives and the sudden accepted role of mobile phones at dinner tables? Can it be right that we sleep next to our digital devices as if we are married to them? How many millions now wonder whether their intimate thoughts and actions have been spied on?

I too have anxieties. I think our technical capability ran ahead of our laws and democracy, and would suggest that recent spying scandals have severed the cord that connected technology and democracy. Furthermore, I see dangerous parallels between the unelected and unaccountable power wielded by bankers before 2008 and that wielded by our technical and security community today.

In a sense, the Snowden revelations are the Internet’s Lehman Brothers moment, and it requires us to reflect deeply. But Snowden is not like the bank rescues I oversaw in 2008 and 2009 as European Competition Commissioner. Yes, the primary element lost in the storm is that of trust, and restoring it requires swift firm action from leaders. But it is much harder to price identity and define sovereignty or build unbreakable security systems than it is to set an interest rate or sell a branch of a bank. And if we focus only on the risks of technology, what do we miss as a set of communities and as an economy in terms of opportunity?

From my daily work with entrepreneurs and researchers I also see the wonders of the digital world. Yes, I may hate the idea of endless phone conversations on planes and prefer to close deals in person not via a screen, but I remain an optimist about digital technology.

If I can be a digital ambassador – a person in her seventy-third year, who has been tapped and hacked throughout 40 years of public life – surely everyone can join this transformation.

ICT and telecom sectors are important in their own right, but their contribution to the rest of the economy is what makes them stand out. As the source of more than half of our productivity growth, they breed competitiveness and ensure the new internet economy is responsible for more of our recent growth than any other sector.

Think now of the automotive industry, so omnipotent in the shared identity, economic success and daily life of Germans. Audi, BMW and Mercedes Benz are pioneers in autonomous cars, electric cars and related services. They are software companies as much as car companies today.  From the steering to the brakes to the GPS to the digital radio and now the eCall emergency alert system developed by EU-funded research. We need people who can fill their factories and laboratories. We need to make sure their products work everywhere – we cannot have cars cutting their engines at borders or paying roaming charges!

The right policies here can be the foundation stone of a real digital industrial policy, one that protects and pushes Europe’s industrial sovereignty and ensures our global leadership in sectors from photonics, electronics and automotive to smart systems and robotics.

By contrast, if we have digital policies based on retreat or protectionism then the whole industrial landscape will suffer, leaving Europeans as mere consumers: squeezed between the hardware of Asia and the software and services of America.

We must avoid self-inflicted economic damage and be strong enough to create as well as to consume. That starts with removing the constraints of 28 national markets. But the real reason to engage in the digital revolution is not industrial – it is because digital technology is essential to saving Europe’s social model.

What will make European manufacturing viable in this context? How will we afford dignity for the millions who will soon be living to the age of 100 and what jobs will exist for this new generation?

We must make peace with the fact that these questions will be unanswerable without a full embrace of digital technology. Look to the industrial robots that may take some jobs, but also allow us to bring back jobs from China and keep manufacturing alive in Europe. Be open to the ways that big data, managed the right way, is a chance to improve the functioning of our communities, rather than a mere invitation for “big brother” to invade on our privacy.

Such peace cannot be imposed by me or anyone else in Brussels. A Europe not based on the consent of people is one destined to fail. But as protectors of the common European internet, the European Commission has several roles to play in Europe’s digital transition.

The first is ensuring Europe is not relegated to the global second division. We once created the global mobile industry with the 2G GSM standard, but we became complacent and never finished the job of completing our single market. Our governments made some short-term money squeezing cash from companies for 3G and 4G licenses, but they lost on long-term VAT revenue, left operators with no fat to re-invest, and our equipment manufacturers suffered. Europe can’t afford to make this mistake again.

To ensure we don’t the European Commission must set rules for a level playing field and build the field: the single market. We must support a system that developers players for the field: education and research. And we must remember that the Commission can be sometimes doctor, coach, or cheer squad, but never the player on the field. We are not the goal-scorer or the hero. That is the role for private industry and national leaders. Europe in summary should do only what others cannot do, and that which must be done.

That leaves a great deal to do. Take the symbolic victory of ending mobile roaming charges, which next week should achieve the endorsement of the European Parliament. No-one but the EU could solve this market failure. One big force was required to voice the collective will of European businesses and consumers, a voice that cannot be heard in 28 national debates where the vested interests of a few telecoms companies would always have won.

Likewise with “net neutrality” – your ability to access whatever legal content you want online. That right cannot be real unless it is written in law and applies to all 500 million Europeans. That does not mean unelected officials determine one’s rights online, rather it means using the tool of the EU to avoid a patchwork where some are protected, others are not, and everyone is left in a different situation.

One may also say that only the European Union could ensure a strong and united response to recent surveillance scandals. In an ideal world that is certainly true. Yet such a world does not exist and the price of it would be less freedom for national governments. That is something national governments, including Germany, and most individuals will never accept. The fruits of that reality include a limited ability to manoeuvre when faced with mass spying by both foreign and domestic forces.

Is Europe taking the right approach within its powers? I believe we are travelling in the right direction; sometimes we race forward, other times we limp forward.

Our long-term digital planning is second to none.  We run the world’s biggest research programme funding the world’s most important research. From mapping the human brain to developing the next wonder material: graphene. We will seize back global mobile leadership by setting the global standards for 5G mobile, and overtake the US in chip production by 2020.

We are also the champions of change on our weakest fronts, such as the lack of digital skills across all generations, which will soon leave one million jobs requiring digital skills vacant even as 26 million search for work. I cannot regulate these skills into people, or these people into jobs – but until my final breath I will fight loudly for more respect for of entrepreneurship and work with any willing partner to increase investment in these skills of the future.

It is also critical that the European Commission is willing to provide a “reality-check” on digital issues. For example, it is politically inconvenient to tell citizens and politicians alike that the distinguishing feature of the digital world is that everything is connected. That you cannot succeed in tackling digital problems one at a time. That is why the Commission proposes a wide-ranging regulation for a telecoms single market, and not merely the end of roaming, for example.

But what is next?  The connectivity of everything takes us back to the thorn of data. The internet is now driven by data: billions of sensors sharing data, billions of people handing over their data so that they can consume information and games and social networks without paying for them in cash.

While processing data allows us to understand how to be more efficient, give people more of what they want, as see ourselves in ways we could not see before, we are yet to get the balance right. Too many people still act with their eyes closed: they see the internet as something that exists for free, when that cannot possibly be true. Someone paid with their money or their time to make each service, each piece of content on the internet. And you have to pay for it with either your money or your data.

Using and protecting data is a mutual responsibility. Governments have a responsibility to educate and promote responsible use of internet and data, and to enforce robust laws. Consumers have an interest to have a choice of high security products and services. Companies themselves must be aware of the massive costs of data breaches: fixing software, possible fines, and severe reputation damage. But let us reflect for a moment on the tone of debate about data protection.

It is not satisfactory for citizens and activist groups to demand politicians take ever tougher action on data privacy, when their own behaviours suggest they do not take it seriously. 95% of Germans in a study for the Fraunhofer Institute told researchers they think seriously about whom they share their data with. Yet 80% of those same people agreed to sell their personal data for five euros (€5) in a Fraunhofer laboratory experiment. 50% of Germans say they read those long pages of terms of conditions of internet contracts, when common sense tell us the real  figure is closer to 1%.

With such massive gaps between data protection perceptions and reality, the only sustainable solution is better security products; a better lock on the front door. Otherwise people will keep blindly sharing and security services will find it all too easy to see and companies all too easy to exploit.

So let us invest in this more secure future – let us spend the next 10 years making security Europe’s competitive advantage. American companies can be our allies – 80 to 90% of their customers are from outside the US. They have as little interest in being pawns of the NSA as you or I. The European Commission is investing hundreds of millions of Euros into research into products like smart cards and services like cryptography. Several new laws will increase the security of cross-border transactions, will require companies operating critical services and infrastructure to report when your data breached – to both you and national authorities, and will fine companies that fail to protect your data.

By seeing the digital world in its many layers, we can build and shape tomorrow’s economy rather than scrape by on yesterday's. We must aim for a connected, open and secure continent.