European Council leaders will have their first substantive discussion on the next long-term EU budget (multiannual financial framework—MFF) at their summit in mid-October. This follows the Commission’s initial proposal, which was published in May 2018 and has been the subject of Council negotiations since. The European Parliament has set out its detailed position in several resolutions. The long-term budget negotiations in 2013 were particularly divisive, but these proposals arguably contain even more contentious issues and the gap between the institutions appears wider than ever.

There are several aspects to consider. First, the overall size of the budget. A number of member states want a reduced budget in light of the UK’s anticipated exit, whereas the Parliament has called for an expansion far above the Commission proposal. The Commission suggests keeping the budget roughly stable, albeit that it would require increased member-state contributions to make up for the loss of UK contributions. A smaller budget would obviously come at the expense of net recipients, most of whom tend to be central and eastern European countries.

Second, there are substantial changes within existing budget programmes. The most significant come down to four items: directs payments to farmers, the Cohesion Fund, Horizon Europe and Erasmus+. Funding for the first two is set to fall in real terms, and to rise for the latter two.

Broadly speaking, the cuts would be felt most strongly by smaller, and central and eastern member states, to whom the Cohesion Fund is directed and for whom direct payments to farmers are a substantial part of overall government spending. The Cohesion Fund accounts for more than 20% of EU expenditure in five member states: Slovakia (27%), Czech Republic (26%), Poland (24%), Slovenia (23%) and Hungary (21%). The slated 45% real terms cut in the Cohesion Fund will thus fall most heavily on these member states.

They would also be worst hit by any cuts to direct payments to farmers, through the European Agricultural Guarantee Fund (EAGF), whose funding is proposed to fall by 11%. Although the richer member states derive the largest share of their EU funds from this programme—Ireland (65%), Denmark (59%), France (52%), Germany (45%) and Spain (42%)—EU spending is a tiny proportion of their overall government spending (1.6% on average between them). 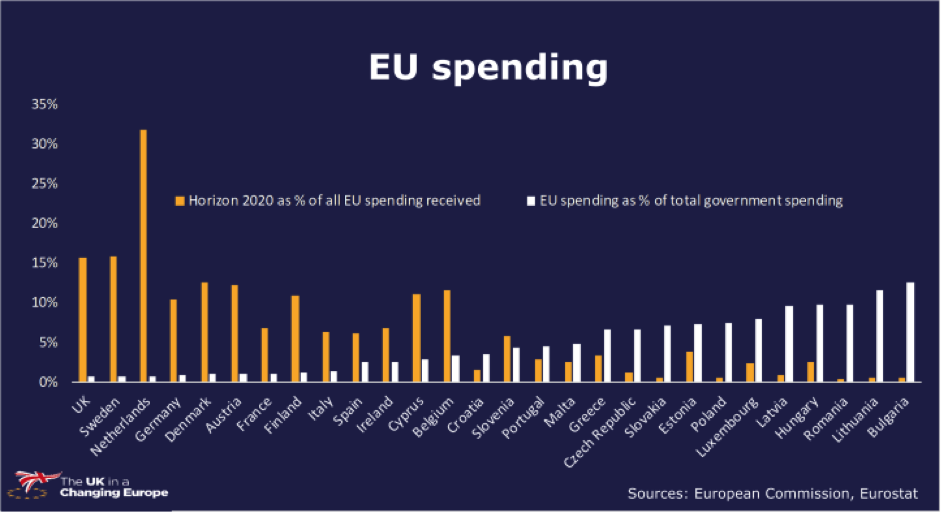 By contrast, the member states that would benefit most from expanding the Horizon Europe programme are the richer, northern and western member states. As the chart below shows, it is countries such as the Netherlands, Sweden, Denmark and Austria who benefit most from this programme. The likes of Romania, Poland and Bulgaria receive almost no Horizon funding. 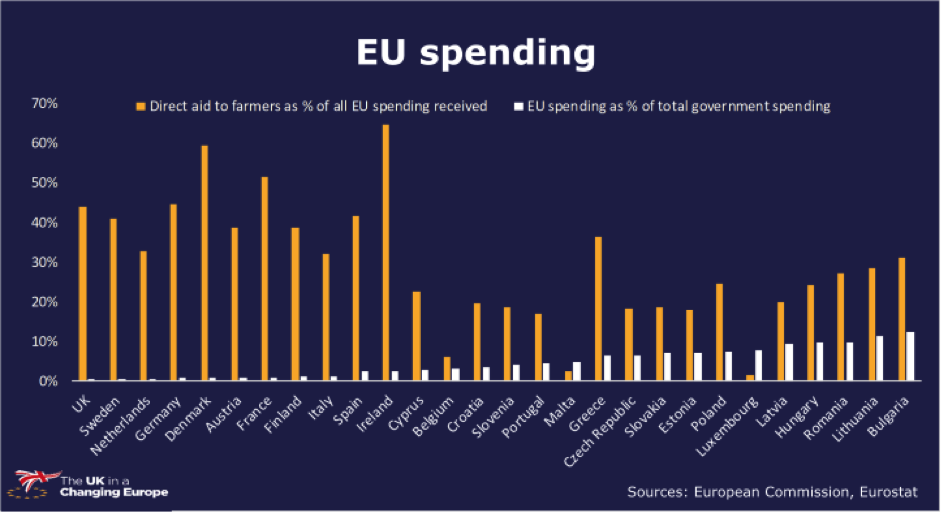 Third, the Commission proposal includes the introduction of budgetary sanctions for rule of law violations which broadly relate the budget. It would allow the Commission to suspend, reduce or restrict member state governments’ access to EU funds if found in breach. It could affect all government entities, but not non-government recipients that receive funding directly from EU projects and programmes. A decision to impose sanctions would be done via reverse qualified majority in the Council, i.e. unless 15 member states disapproved of the decision, it would be implemented. This means that, in theory, a majority of member states (14) could disapprove of a decision and it would still apply.

Fourth, one impact of the UK’s exit is that it has led to the proposed abolition of all rebates, given they were linked to the UK rebate. Austria, Germany, the Netherlands and Sweden currently receive a rebate of 75% on their contribution to the UK rebate, which in turn is financed by all other member states. This would be phased out over the first five years of the next budget period (2021-25). Dutch Prime Minister Mark Rutte said, ‘This is not a solution for the underlying problem of the unfair distribution of costs.’

Overall, the Commission proposal seems weighted against smaller, and central and eastern member states. The overall size of the budget is unlikely to be higher than the Commission’s proposal, so the net recipients would be worse off overall, given they would have to make small additional contributions to cover the loss of UK funds. The reductions in the Cohesion Fund and direct payments to farmers would also disproportionately affect these states, while they would benefit less from the expansion of the Horizon research programme. Finally, with punitive measures on the agenda—aimed indirectly at Poland and Hungary—it is hard to avoid the impression of an MFF weighted primarily towards the interests of the richer member states. And this comes on top of an EU top jobs process that excluded eastern member state representatives from the highest echelons of the EU institutions.