In each round of the European Social Survey (ESS), we include several questions that ask respondents of their attitudes towards Europe.

These questions were most recently asked in Round 10 (2020-22) of our survey. Due to measures implemented to prevent the spread of Coronavirus, we were forced to extend our fieldwork period.

This means that we currently have data from 10 countries, collected from face-to-face interviews. Data from a further 15 countries will be published in November, including some who used self-completion methods for the first time.

Ever since the UK planned a referendum on European Union (EU) membership, we have asked respondents whether they would vote to remain a member or leave the union, should a fictitious referendum be held in their country.

Response options for this question are reversed in non-member countries: we ask respondents in those countries whether they would like to join or remain outside the union.

When we first asked this in Round 8 (2016/17) of our survey, a majority of respondents in all EU member countries indicated a desire to retain their current status. Most of those in the EU countries included in the ESS would vote to remain in the union with those in non-member countries preferring to remain outside the EU.

This pattern continued in Round 9 (2018/19) in all but two of our new non-EU countries – Montenegro and Serbia – where a majority would vote to become members.

When assessing our latest dataset, all 10 countries are already located within the EU, and a majority of respondents in each again indicated that they would vote to remain. 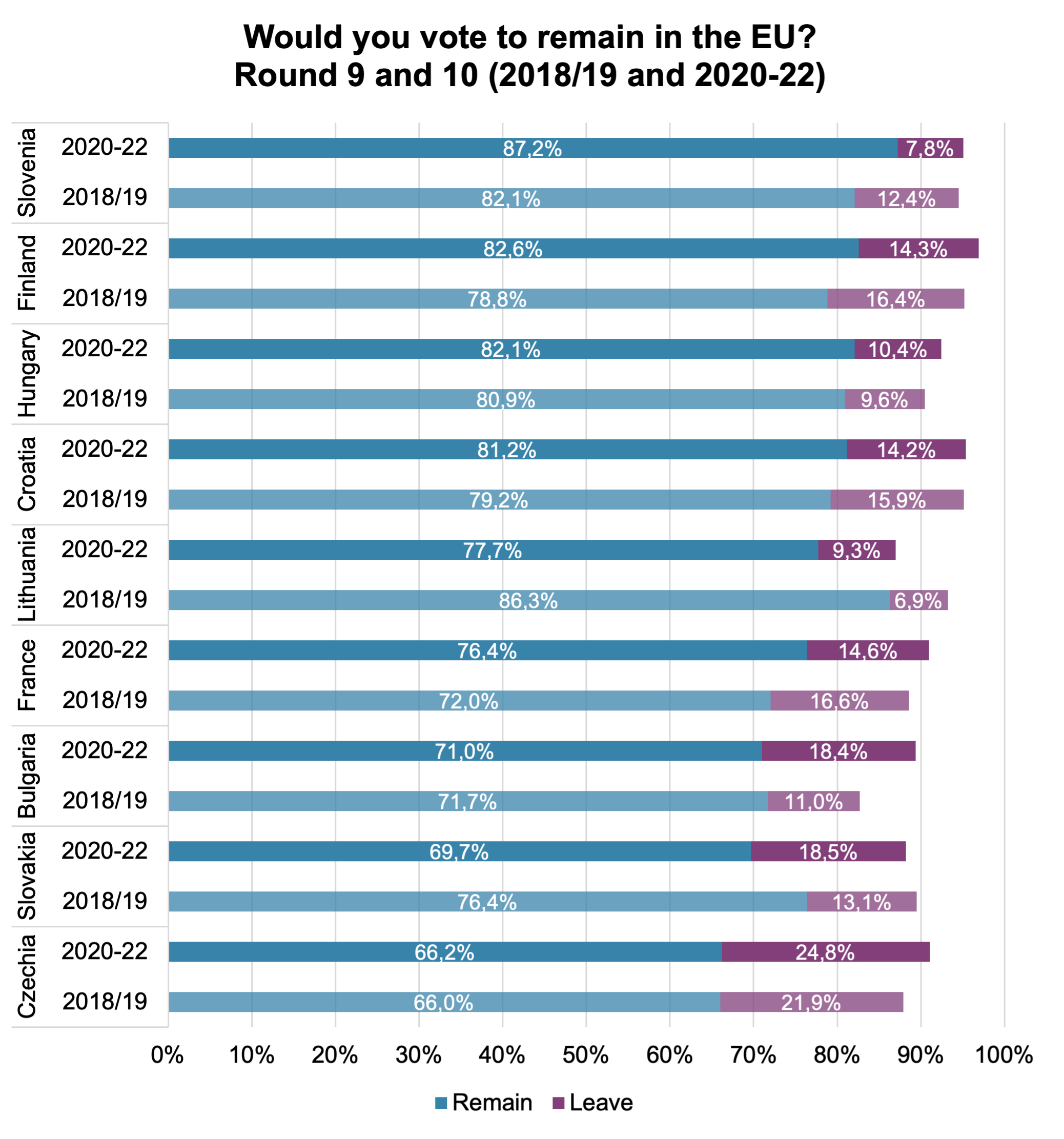 Answer options for this question were: Would vote to remain member of the European Union; Would vote to leave the European Union; Would submit a blank ballot paper; Would spoil the ballot paper; Would not vote; Not eligible to vote; Refusal; 88. Don’t know; 99. No answer. Only the first two answer options are indicated on the graph.

There is significant support for remaining in the EU in all 10 countries where the most recent data is available. Support outnumbers opposition from between almost 3-1 in Czechia to 11-1 in Slovenia.

Increases in support for continued EU membership were also found amongst those in France (+4.4 percentage points), Finland (+3.8), Croatia (+2) and Hungary (+1.2).

A significant decrease in support was found amongst Slovakian respondents (-6.7). 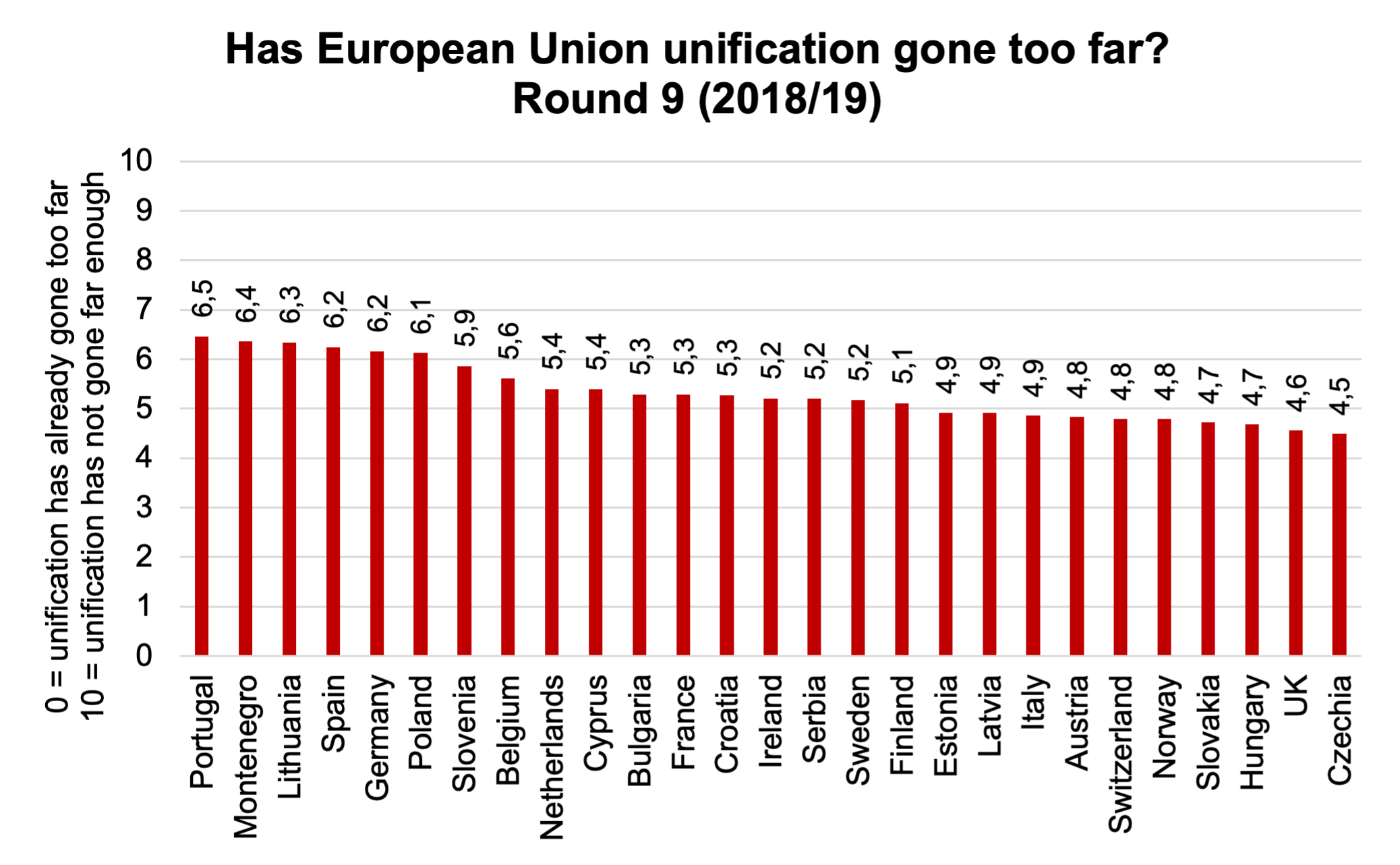 In 2018/19, Czechs were the most likely to think that unification had gone too far, with a further nine countries reporting means of below the mid-point on the scale (5).

This meant that respondents in 17 of 27 countries were more likely to think that European Union unification had not gone far enough. 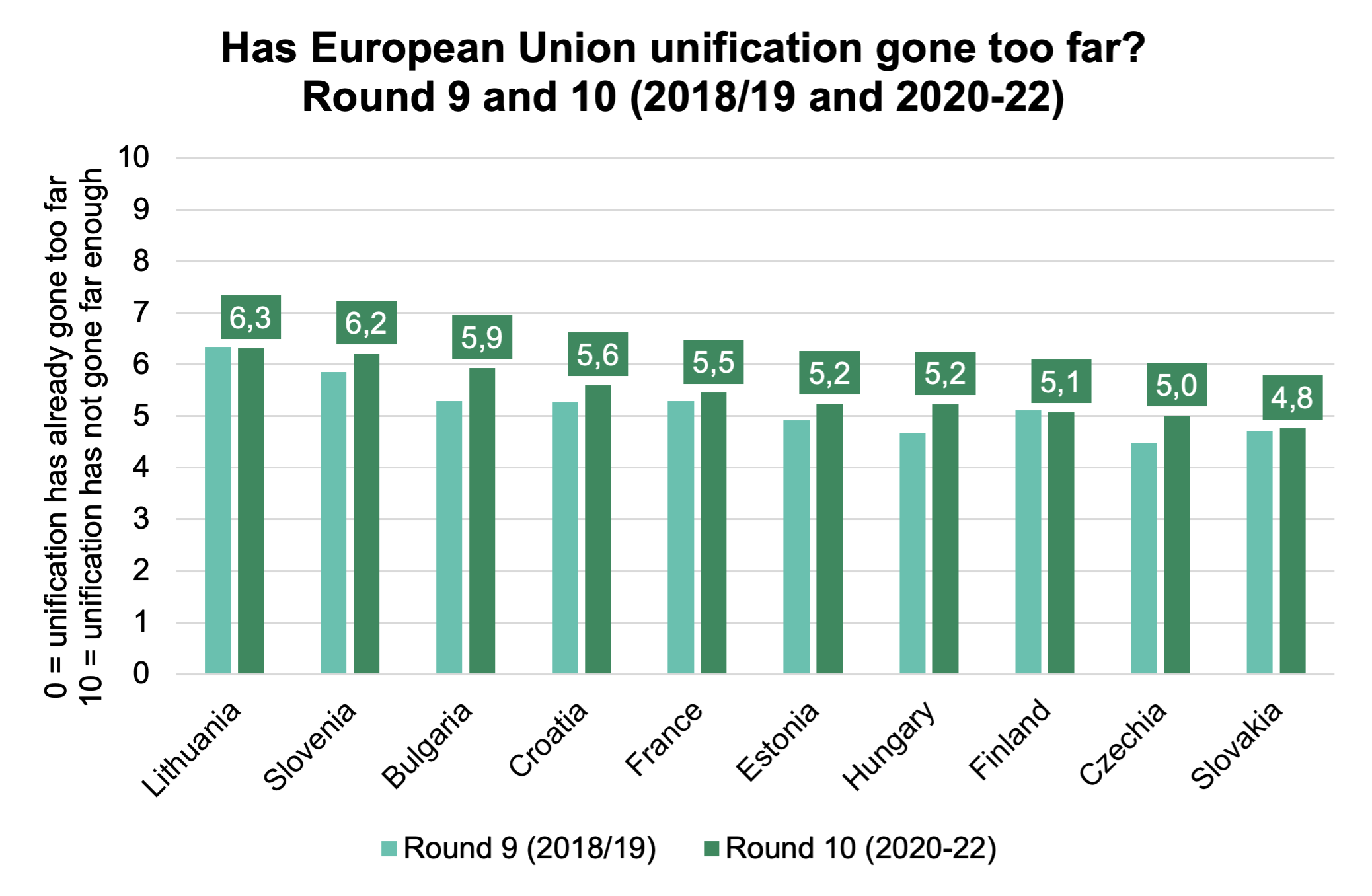 Once we calculate the mean scores for the 10 countries where the most recent data is available, we find respondents are clustered around the mid-point of the scale (5).

These figures are relatively in line with our Round 9 (2018/19) data, with those in Lithuania continuing to be amongst the most in favour of further European unification.

Of the 10 countries where data is available from 2020-22, eight reported means in favour of further unification, one was on the mid-point of the scale and only one felt unification had gone too far.

Our next release in November will include data from a further 15 countries. Only then will we be able to determine whether this initial pattern showing a majority of countries calling for further European integration is replicated.