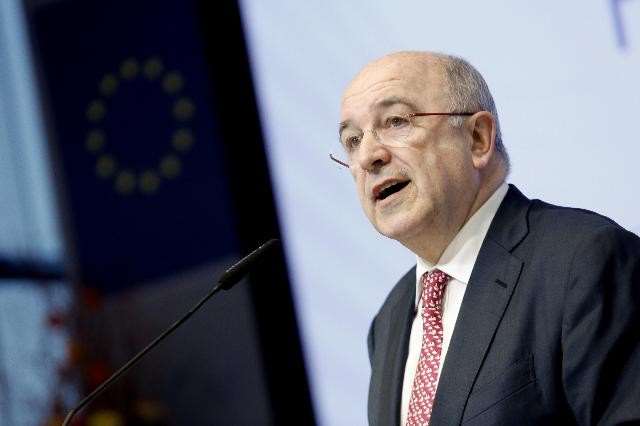 The recent IMF assessment of Europe’s financial sector found that much has been achieved to address the recent financial crisis in Europe, but vulnerabilities remain, and intensified efforts are needed across a wide front: Bank restructuring and resolution, fast and sustained progress toward an effective Single Supervisory Mechanism (SSM) and the banking union (BU), and further steps toward a stronger European Union (EU) financial oversight framework. This article specifically looks at the role played by State Aid in Europe’s financial sector.

During recent years, EU governments have committed unprecedented support for backstopping the financial sector with tax payer money. Over the September 2008– October 2012 period, member states committed an estimated total of nearly €4.9 trillion, i.e., 39 percent of the EU GDP. The amount of tax payer money effectively used (mainly via capital injections, State guarantees issued on bank liabilities, etc) amounted to €1.7 trillion, or 13 percent of EU GDP (23 percent including the LTRO). Out of the 76 top EU banking groups, 19 currently have a major or even a 100 percent government stake (see the IMF Technical Note on Bank Restructuring for details).

Direct government support measures were normally complemented by action to restructure the affected banks, in part thanks to EU rules on State aid. According to the EC Directorate General for Competition (DG COMP), 10-15 percent of the EU banking system is now under the State Aid framework and undergoing some forced restructuring. Based on a restricted sample of 30 EU large institutions, banks under EU State Aid rules have been (in the process of) deleveraging, with up to 19 percent of their total assets, according to Morgan Stanley research, while other banks that did not fall under DG COMP State rules deleveraged much less (see figure below).

1/ Banks under formal EU State Aid program as of September 2012.

Competition and State aid policy has served as the de facto coordinating mechanism in bank restructuring during the crisis, as it is the only binding EU framework available for this purpose. The EC Directorate General for Competition (DG COMP) has the exclusive mandate and power to ensure that State aid is compatible with the treaty, and that State aid provision is accepted in exchange for strict conditionality. Member states have provided aid through capital injections, guarantees and asset purchases. Compensatory measures required by DG COMP have included divestments, penalty interest rates, management removals, dividend suspensions and burden sharing (shareholder dilutions, and, lately, bail in of subordinated debt).

Interventions by DG COMP have been instrumental in imposing restructuring on banks but have on occasion heightened macro-financial concerns. In particular, there have been concerns about the speed of decision making and insufficient transparency, and the impact of compensatory measures on financial stability and economic growth. Since DG COMP could only act in response to national State aid proposals, decisions were taken case-by-case on an individual basis even in the presence of system-wide problems.

State aid management is evolving to respond more flexibly to the crisis, but faces fundamental challenges. DG COMP is assigned a difficult task in mitigating competitive distortions, yet preserving financial stability, and limiting the costs to the taxpayers while ensuring the long term viability of the institutions that receive State aid. The design of intervention strategies, therefore, sometimes involves significant trade-offs. Procedures have been accelerated, and sector-wide implications have been taken into account. The ongoing Spanish arrangement, for example, takes a broader approach. The Commission’s powers regarding the resolution of banks have been strengthened further, since ESM support to bank recapitalization is now conditional upon the Commission's approval of those banks' restructuring plans. The new mechanism has given DG COMP greater influence in the restructuring and resolution of banks receiving State aid, and led to a significant acceleration in the approval process. For instance, it took less than six months to approve the restructuring plans of eight Spanish banks, consistent with the timelines of the European program of assistance to Spain. Stronger coordination with other institutions is desirable with a view to achieving the Commission’s objective of “restoring financial stability, ensuring lending to the real economy, and dealing with systemic risk of possible insolvency.”

DG COMP’s practices in systemic cases can be further enhanced to ensure consistency with a country’s macro-financial framework. Phasing and composition of bank restructuring is critical to mitigate adverse macroeconomic effects. DG COMP seeks to set the right incentives to make the best use of State aid and withdraw from state protection as soon as possible. A pricing policy has been established based on recommendations of the ECB that seeks to limit moral hazard by ensuring a sufficient degree of burden sharing, although at a level which is still below the remuneration that would, in the absence of State aid, be requested by the market. However, increased transparency in pricing and proposed deleveraging would give added credibility to DG COMP’s efforts, which sometimes appear to be ad hoc. An examination, for instance with the IMF and ECB, of its policy for determining the remuneration of instruments used for capital support would be appropriate, to ensure on the one hand that it is not double-hitting a fragile institution and on the other not simply delaying the institution’s demise, and thereby undermining financial stability going forward. Similarly, it would be helpful to look again at the methodology for determining the required degree of bank deleveraging.

DG COMP’s role will change as a dedicated resolution framework for the BU is developed. The challenge will be to find a balance to foster a more integrated approach between the Commission as the guardian of competition and institutions that, concomitant with the BU, will be charged with overseeing bank resolution and safeguarding financial stability at the EU level. One option would be to foster a permanent coordination mechanism between DG COMP and financial stability authorities to deal efficiently with the competition and State aid aspects of future resolution cases. Moreover, as most large EA banks have presence outside the likely BU perimeter, there is likely to be an important role in coordinating between the BU resolution authority and those in the remaining EU member states using the framework of the prospective resolution directive.

The views expressed in this article are those of the authors and should not be attributed to the IMF, its Executive Board, or its management. Any errors and omissions are the sole responsibility of the authors.