“So tell me what you want, what you really really want”

So went the line in the Spice Girls 1996 hit single ‘Wannabe’, and that is what we wanted to ask the British public. We wanted to know what they “really really want” from Brexit. The ‘In/Out’ referendum question encouraged the view that this was a binary choice. But how did people understand these two options? Did voting to leave mean leaving the single market? Did it mean ensuring that the UK would be able to make its own trade deals; limit migration to and from EU countries; or make all of its own laws? Some would argue that the choice for remain may have been equally unclear, requiring a detailed understanding of the costs and benefits of being in the European Union.

To understand the British public’s views about these trade-offs the Policy Institute at King’s College London, with colleagues from RAND Europe and Cambridge University, have employed a technique known as ‘stated preference discrete choice experiments’. This economic approach is used to quantify population preferences for goods or services for which no market exists. The method involves asking individuals to state their preference between hypothetical alternative scenarios. Each alternative is described by several attributes, in this case attributes like freedom of movement, access to the European single market, sovereignty, etc. Each of these attributes is further described by a range of levels, reflecting the status quo and possible negotiated positions. By doing this we go beyond the politically-contested and sometimes ill-defined language of ‘hard’ and ‘soft’ Brexit and look at the public’s views about the detailed choices on offer. By applying discrete choice modelling to people’s stated preferences on different aspects of Brexit we are able to quantify the relative importance of different elements of Brexit to UK citizens, as well as explore voters’ relative valuation of different options for the UK’s relationship with the EU. Importantly, because we included as an attribute the UK’s financial contribution to the EU, we could express our results in terms of money – that is how much people would be willing to pay or need to be compensated for various outcomes.

Given the likely sensitivity of this type of work we went for the most robust sample we could, piggybacking on NatCen’s British Social Attitudes survey which uses an approach considered to be the gold standard for survey research. We spoke to 917 people through a mix of telephone and on-line approaches, presenting them with different choices for a Brexit deal, and then asked them to choose their preferred outcome. Using an experimental design, we ensured that the choices were varied in such a way that we could estimate the value for different aspects of a Brexit deal (as summarised in the figure below). 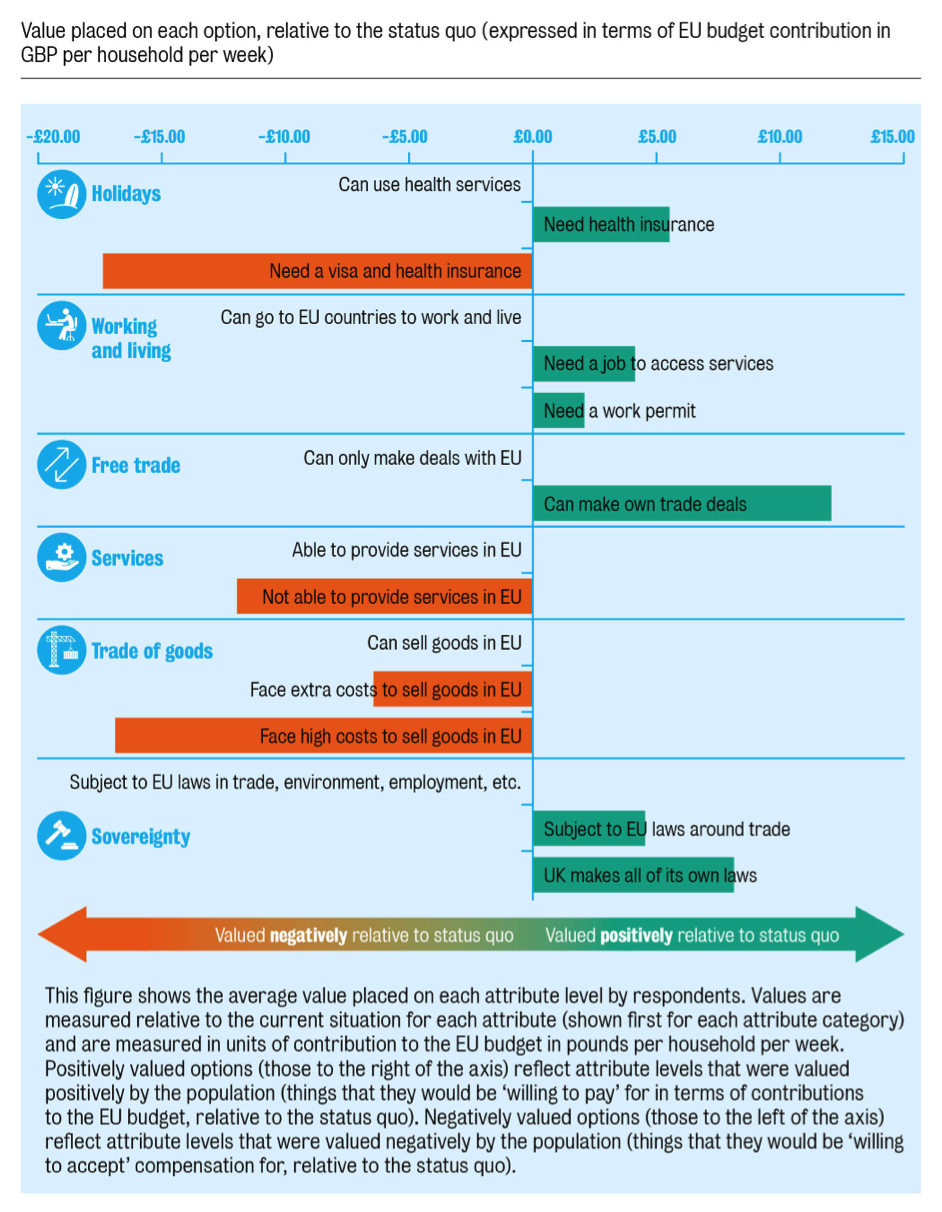 So what did we learn?

First, the British public want a deal, and are willing to compromise to get one. Or put another way, they are sophisticated enough to know that they can’t have their cake and eat it too, and they do not want to crash out of the EU on WTO. From the resulting valuations in our experiment we are able to build up the value that people place on the various possible outcomes of the negotiations based on the components of those, in terms of freedom of movement, contribution to the EU budget, trade restrictions, access to the single market and sovereignty. If we do this for no deal, we find that respondents value that situation, adding together its positives and negatives, at £14.05 per household per week worse than remaining in the EU. At the same time, if we carry out the same exercise for the option of the UK joining the EEA, adding together the British public’s negatives such as full freedom of movement and its positives such as retaining current levels of trade in services, we find that the British public values the whole option as £13.74 per household per week better than remaining in the EU, and £27.79 per household per week better than ‘no deal’.

We also know from the survey that some aspects of Brexit are valued favourably – such as being able to make trade deals without the EU, and not being subject to EU law, but these are outweighed by negative features such as the potential need to obtain a visa to go on holiday, or the need to have a work permit to get a job. This nuanced trading of different aspects of Brexit demonstrates the capacity of the British people to accept a compromise as part of a deal.

Second, and intriguingly, respondents seem more concerned by unrestricted access to public services, than freedom of movement. This was particularly true for those who voted to Leave the EU. While our results do show a desire to control movement of people, to some extent, we find that this stems from a concern about managing demand for public services, rather than wanting to simply limit freedom of movement. For example, respondents wanted all holiday travellers to carry insurance to pay for any health care, including emergency health care, they might need, but were very strongly opposed to imposing visas on holiday makers. In fact, visa-free holiday travel was the single most favoured feature in the whole study (see Figure).

There were a number of other interesting findings including:

Overall, we demonstrated the feasibility of applying stated preference discrete choice modelling to understand people’s preferences for Brexit. However, we should stress, that our analysis is a snapshot in time – with field work occurring in February this year, that is before the General Election – and people’s preferences are likely to change in the volatile political environment that the UK is currently experiencing. Ideally, we would like to repeat this study at regular intervals – both to understand how those preferences are changing but also to inform ongoing negotiations between the UK and the EU. Also, it would be interesting to undertake a similar study with residents of other EU states, to get a view of what the non-UK European public want from Brexit.

A deal that reflects the preferences of the British and European people, is surely better than a bad deal or no deal.