Serbia, Kosovo and the benefits of normalisation 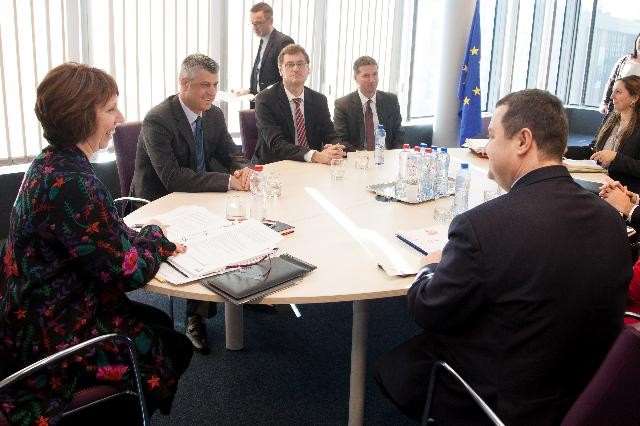 The term normalisation conveys uninspiring, middle-of-the-road blandness. Not so in ex-Yugoslavia where fresh memories of violence and lingering tensions among states and ethnic groups still animate politics.  It is therefore hard to exaggerate the significance of the deal cut by the prime ministers of Serbia and Kosovo Ivica Dačić and Hashim Thaçi on 19 April.  The 15-point agreement tackles the single most important issue dividing the two sides: the status of Serb-populated northern Kosovo. The extensive autonomy in areas such as policing and justice is the price Prishtina is willing to pay in exchange of Belgrade’s recognition of its jurisdiction over the four municipalities in question.

To be sure, the agreement implies no formal recognition of Kosovo’s independence. But all the same, Dačić’s signature, now confirmed by the coalition government in Belgrade, is a concession acknowledging Kosovo as a bounded political entity.  Not to forget that the incorporation of the north into Kosovo’s constitutional structure strengthens the position of local Serbs, two-thirds of whom live in the Albanian-dominated south.

Contrary to the nationalist mantra, Kosovo is not Serbia. Yet Belgrade is seizing the chance to make what they see as a breakaway province a tad more Serbian.  It is too early to tell how well the power-sharing arrangement will work, the record thus far is chequered – both in Kosovo and in neighbours such as Bosnia or Macedonia. For sure, this won’t be a smooth ride. But Serb autonomy, disproportionately large share of power and resources via transfers from Prishtina, Belgrade and outside donors is beyond doubt the lesser evil compared to outright partition which would set off a chain reaction across the Western Balkans.

One person who certainly has a reason to rejoice is Catherine Ashton along with her colleagues at the EEAS. Long dismissed as a lightweight the High Representative for Foreign and Security Policy has scored a glaring success by getting the two sides to shake hands after several rounds of tense talks over the past weeks. This time it is not pure symbolism: chairing a high-level meeting with the top leaders. Nor it is about extracting some interim concessions to do with customs controls or the trade regime. The EU foreign policy chief has brokered a deal which, if and when implemented, settles the most acute political dispute in the Balkans, one that triggered a military intervention back in 1999.

If it wasn’t for the EU, it would have been next to impossible for the parties to portray the 19 April agreement as the win-win option. Closing the Kosovo page allows Serbia to move closer to the Union. After several delays, the European Commission has just published its regular monitoring report recommending the launch of accession talks with Belgrade. Enlargement Commissioner Stefan Füle should be feeling as happy as Ashton.

But Kosovo benefits too as the agreement paves the way to the signature of a Stabilisation and Association Agreement (SAA) with the EU, the first step on the accession path. Prishtina obtained a positive feasibility study already last year and normalisation with Serbia doesn’t leave much wiggle room to the five non-recognisers to block the SAA.  One cannot be more Serb than Serbs themselves in fighting a rear-guard action to prevent Kosovo’s establishment of formal relations with a variety of international bodies. After all, Point 14 of the agreement stipulates that “neither side will block, or encourage others to block, the other side’s progress in their respective EU path.”

Normalisation is bound to impact on the wider region.  If Serbia, the largest successor state of Yugoslavia, starts negotiations this summer, pressure will mount on next-door Macedonia to follow suit. A candidate since 2005, the former Yugoslav republic has already been leapfrogged by Montenegro in 2012. If Serbia and Kosovo are able to find a workable compromise on a complex set of very tangible problems related to territory and borders, there is no way to believe Macedonia and Greece cannot resolve the mainly symbolic name dispute.  With Croatia joining in July 2013, Montenegro and Serbia negotiating and even laggard Kosovo catching up, Bosnia may also be prodded into action after it missed several opportunities to obtain candidate status.

Yet it is too early to declare victory in the Balkans. As usual, EU policy suffers from inconsistencies: the Ashton-brokered compromise foresees a Serb police chief for Northern Kosovo while Bosnia is asked to implement a decision of the European Court of Human Rights striking down the principle that public offices should be reserved for members of particular ethnic community.  Even more important, Brussels has to prove it is not only an effective diplomatic troubleshooter but also an engine of growth and development.  Otherwise the famed power of attraction will erode over time.

Unfortunately, malaise has already spread from the ailing Eurozone to the Balkan periphery. Even star-pupil Croatia is going through a fifth year of recession. After modest recovery in 2010 and 2011, Serbia dipped by 1.7% last year. With 3.8% Kosovo’s macro figures look better, but the country remains one of the poorest in Europe.  The region needs more than Ashton and Füle’s bold efforts to move forward. Or else normalisation will feel like EU-style stagnation.