Securing a free and open cyberspace 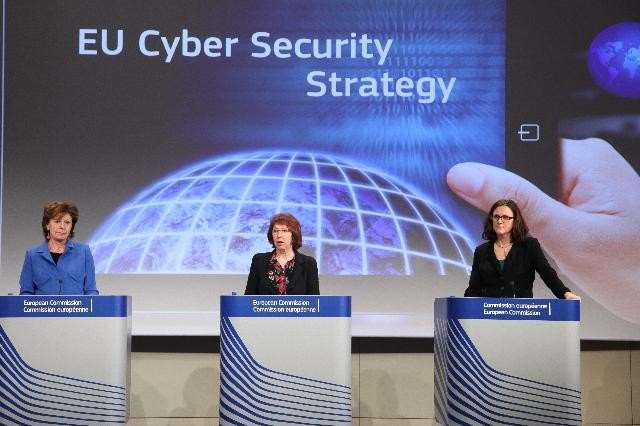 Back in the 1960s few people thought that the large grey terminals that lined a laboratory basement in California would one day change the world. Today, we see their impact on almost every aspect of our lives: the Internet connects rich and poor, boosts trade and broadcasts debate. It brings knowledge to remote villages, provides information for innovators and drives commerce.

Over the past five years, the Internet has accounted for a rise in GDP of over 20% in the world’s major economies. By completing the Digital Single Market Europe could boost its GDP by almost 500 billion euros a year, an average of 1000 euros per citizen. Cyber Commerce also creates new jobs and endless opportunities for innovation. There are now over 2 billion networked people in the world who increasingly rely on the Web to shop, study, bank and vote.

The Internet has also become a motor for social progress. In country after country where governments once controlled nearly every aspect of life, citizens now use social media to demand openness, jobs and equal opportunities. With 43 million Facebook users in the Arab world, including 15 million women, the region's socially marginalised and politically oppressed stay connected with each other - and the world. Through online courses, people around the world now have access to world-class education, even in remote and underdeveloped regions.

Unfortunately the Web's great benefits also come with growing risks. Sophisticated malicious viruses increasingly circulate on the Web, attacking millions of new computers every day. Up to 600 000 Facebook accounts are blocked every day, after various types of hacking attempts. The dependence of essential services like transport, power, and water on cyberspace also makes us vulnerable in new ways to cyber-terrorism, or cyber-espionage. The bill for these attacks runs into hundreds of billions while the human cost could be incalculable.

Citizens are increasingly threatened by new kinds of web-enabled crime. Their freedom to blog, study or bank online is undermined by fraud and identity theft. And the most vulnerable members of our societies, our children, can all too easily fall prey to threats and abuse online. Authoritarian regimes are devising new ways -- often modelled on commercial internet-monitoring tools -- to track and neutralize Internet activism, spread propaganda and impose censorship.

Urgent action is needed to preserve the freedoms of our citizens and the Internet’s capacity to drive social and economic progress. Cybercrime undermines the Web's capacity to drive innovation, growth and job creation. Citizens increasingly doubt the safety of the web; recent data show that almost a third of Europeans are not confident their banking and shopping is safe online and few feel confident disclosing any personal information.

To respond to their concerns and to promote greater safety, the EU has launched a new Cyber Security Strategy. It is designed to safeguard our fundamental freedoms by addressing the growing threats emanating from cyberspace. To do so, the EU has developed some practical solutions. The European Cybercrime Centre helps protect European citizens and businesses against attacks from organised crime groups. Another example is ENISA - the European Network and Information Security Agency, which advises European states on security-related problems in hardware and software products.

Preserving an open, free and secure Cyberspace is a global challenge. If we want to guard our freedoms, we need to share the responsibility they bring with them. This is why – together with our international partners- we need to agree on rules for behaviour and devise ways to protect us from attacks in cyberspace. We can only do this by including everyone concerned- governments, international organisations, the private sector, and civil society. The EU's Cyber Security Strategy gives us a common framework to take our work forward and engage international partners. We are pleased to see President Obama follow through last week with his Executive Order on Cybersecurity.

In our globalised world cyberspace has become the backbone of our daily interactions. It will only gain significance in years to come. Much as we did not see fifty years ago how the rudimentary version of the Internet could change our lives, so it is hard to predict what technological advances will shape the next fifty years. But no matter where our hyper connected world will lead us, our commitment to a free and secure Internet will prevail.