A week after Boris Johnson’s resignation as Prime Minister, the Tory leadership contest is in full swing. Most commentators consider that any candidate who wants to stand a real chance will need the backing of the far-right pro-Brexit European Research Group (ERG). Therefore, the candidates’ stance on the UK’s relationship with the EU is likely to be higher up on the agenda then their economic vision for the UK post-Brexit.

It is regrettable that six years after the Referendum and a year and a half after the UK left the EU, the governing party still does not have a comprehensive economic strategy. Indeed, while Theresa May’s government had elaborated an industrial strategy, Johnson’s Business Secretary Kwasi Kwarteng dropped it soon after he became Business Secretary. Partly, the lack of an economic strategy may be explained by the libertarian leanings of most Brexiteers in the Cabinet – several of which are running for the Conservative leadership. For instance, the libertarian pamphlet ‘Britannia unchained’ that Liz Truss co-authored reveals a staunch belief in deregulation, self-regulating markets, and minimal state. The libertarian leanings may explain why the economic policies favoured by members of Johnson’s Brexiter Cabinet are limited to tax cuts and reversals of tax increases that they themselves had still supported not long ago. The contradiction between the spending promises and extensive tax cuts has led the Labour leader to denounce the candidates’ economic strategies as ‘fantasy economics.’

While there is no coherent economic strategy in sight, Brexiters have hinted at various points at their preferred economic model for the UK. Early in the Brexit process, there was a great deal of talk about the opportunities stemming from trade liberalisation that Brexit allegedly presented. Several prominent Brexiters suggested that the UK may become an export-led economy. That claim is highly doubtful, but palatable to Brexiters, because it relies – at least in theory – on one of only few government policies that is acceptable to libertarian Brexiters, namely trade liberalisation.

Yet, the benefits of the limited number of new trade deals the government has signed since Brexit still have to materialise. Since the Global Financial Crisis (GFC), the UK has found itself in a phase of economic stagnation, characterised by low growth rates, increased inequality, declining consumption, and lower national productivity rates compared to both other Western countries and to UK productivity rates before the GFC (see figure 1). The situation has worsened due to Brexit, the Covid emergency, and the current cost of living crisis. This poor economic performance may explain why last autumn the ministerial rhetoric about the state and the future of the British economy started to change. 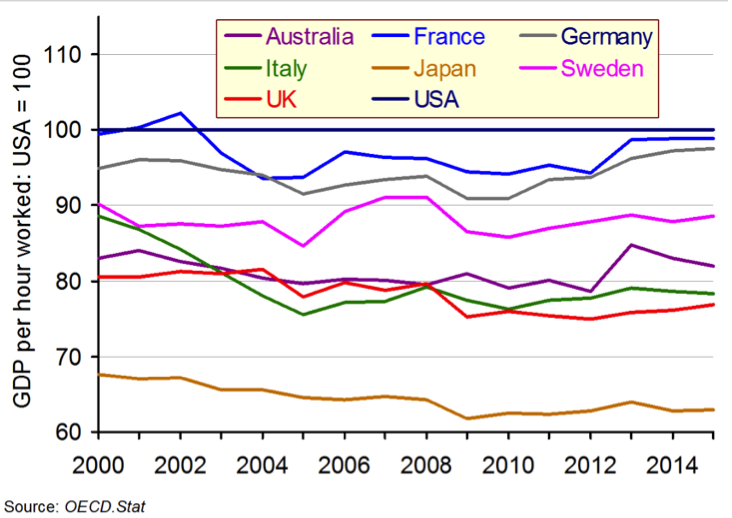 Roughly from the Conservative party’s autumn conference in Manchester, the PM and Cabinet members started to denounce UK companies’ reliance on cheap labour. Then Chancellor – and PM hopeful – Rishi Sunak accused UK employers of ‘being drunk on cheap labour.’ Similarly, the PM used his conference speech in Manchester to criticise what he called UK companies’ ‘mass immigration’ business model, stating that instead people " […] want us to be a well-paid, well-skilled, highly productive economy and that's where we're going." Unfortunately, the end of Free Movement of People did not magically raise wage levels and push ‘British’ workers into higher education and, especially, vocational training. Yet, the Tory government could choose among a wide range of policies to trigger the virtuous circle between skills, wages and productivity. What measures were taken, then? What is just rhetoric and what is reality?

One way to promote Britain’s journey to a high wage, high skill, high productivity economy is to raise labour costs. Companies will then be forced to invest in human capital, technologies, and innovative management practices in order to increase productivity, thus reducing marginal labour costs. Furthermore, they would probably move to less-price sensitive market niches.

Raising wage levels in the bottom and middle of the wage distribution would also contribute to boosting domestic consumption, with positive implications for growth and especially for sectors such as retail and hospitality that depend on domestic consumption.

If the government were serious about the centrality of wages to set in motion the virtuous circle between wages, skills, and productivity, we would expect their policies to aim at protecting workers’ rights and working conditions. In contrast, the government’s actual policies hint at more liberalisation not more employment protection.

Thus, the only concrete steps regarding labour markets regulations and workers’ rights put forward after Brexit were Kwasi Kwarteng’s proposed employment rights review, which the Business Secretary dropped shortly after having announced them in January 2021. These plans may have led to a reduction of workers’ rights, e.g. by ending the 48h-week enshrined in EU legislation. Other actions by Johnson’s government too indicate that workers’ rights are not high up on its list of priorities. This became very clear during the dispute over PO Ferries’ illegal mass layoff. While leading Brexiters vocally defended the workers in the media, they blocked a legal change in Parliament that would have made the fire-and-rehire practices that P&O engaged in more difficult.

Lack of support for policies that would improve workers’ conditions also extends to trade union rights. Strong trade unions are a key factor leading to higher wages. Yet, the government’s rhetoric and concrete policies go in the opposite direction. Following the recent rail worker strikes, the government took advantage of the rampant anti-unionism in the media to announce plans to enable employers to replace striking staff with agency workers.

It seems hence fair to say that despite the populist rhetoric, the government’s concrete polices do not indicate that the Conservatives have a plan for a post-GFC, post-Brexit improvement in UK workers’ conditions.

The UK has traditionally been described as a “low skill equilibrium” due to a chronic underinvestment in the workforce, which in turn has several – institutionally, culturally, and historically determined – causes. Among many factors, academic studies show that the UK’s corporate governance system’s strong focus on shareholder primacy puts pressure on managers of British companies to strategically privilege pay-outs to shareholders over investments in their workforce. Furthermore, the highly deregulated British labour market, characterised by low collective bargaining coverage rates and low dismissal protection, facilitates employees’ exit as well as opportunities to hire skilled workers from the external labour market; thus, it disincentivise companies’ (long-term) investment in human capital. Finally, the distribution of public funding as well as the proliferation of qualifications of dubious quality have made training providers unaccountable to employers, who find it difficult to navigate and commit to the British quasi-market for training.

Thus, the lack of the right kind of skills seems to be the key issue UK employers are struggling with. According to a 2017 report by the CIPD that is the key reason for UK employers' reliance on immigration. Yet, ever since 2010, the Conservative immigration policy has focused on the goal of reducing net migration. The various immigration policies adopted since 2010 sought to achieve this target by cutting low-skilled immigration, while high-skilled immigration was to be encouraged. After Theresa May’s ‘hostile environment’ strategy, Priti Patel’s new points-based immigration system is the latest incarnation of that model. Yet, post-Brexit labour shortages have clearly revealed that the UK economy depends as much – or even more – on immigration of what are often arbitrarily defined as low-skilled workers (e.g. nurses, home carers) as on immigration of high-skilled ones, as a report by the CIPD pointed out already in 2017.

To some extent, the Johnson government seemed to have been aware of that. Its ‘upskilling’ strategy consisted more of dissuading some group in society from studying at university and encourage (indeed force) them to choose an apprenticeship instead. Indeed, plans to create disincentives for people from poorer backgrounds to go to university by introducing a minimum GSCE entry level for higher education and by reducing the repayment threshold for student loans could be interpreted as a strategy to increase domestic supply of middle- and low skills.

The additional spending the government did provide for apprenticeships is mainly going towards improving dilapidated buildings of further education colleges, rather than improving the content of the courses. Furthermore, despite the introduction of the apprenticeship levy in 2015, a recent academic study by one of us shows that the British apprenticeship system still has major shortcomings, which hurt small and medium-size companies (SMEs) in particular. Firstly, frequent government reforms have made the training system complex and opaque, so that it is difficult for both trainees and employers to navigate its complexity and understand the quality of different training offerings. Secondly, training providers have limited incentives to provide high-quality technical training to non-levy paying employers – which are mainly SMEs - compared to large businesses, due to the structure of public funding. While recent changes have tried to address the latter issue, the uptake of apprenticeships by both young workers and employers remains low; especially among the so called ‘long-tail’ of British companies.

Thus, for the time being, Johnson’s upskilling plan has failed to deliver that high-skill and productive workforce that was promised at the Manchester conference.

There are different ways to increase productivity. Upskilling has been the most obvious strategy pursued by the conservative government, that relies on the assumption that labour productivity is (mainly) due to the quality of human capital. While skills are certainly important, there are other factors that equally contribute to productivity. Non-tradeable sectors such as the low-end service sector, for instance, would benefit from policies aimed at stimulating consumption (e.g. wage increases across the economy) instead. That would allow employers to use the demand expansion to make investments in innovative management practices and technology; most of all, given the limited opportunity to increase productivity in those sectors, they would benefit from the opportunity to increase prices and diversify their consumer markets. However, unfortunately, since the GFC the gap between the top income decile and bottom decile have increased, and the gap between median earners and top earners is still one of the highest in Europe.

Most importantly, industrial policies would contribute to raising productivity by stimulating investments in innovative sectors with high productivity potential and by directly investing in infrastructure and R&D. Unfortunately, serious shortcomings in the quality and design of industrial policies have plagued British policymaking for years. Industrial policies in the UK lack consistency because they are largely dependent on political cycles; they would also need greater coordination between ministries, departments and between the national and the local levels. Industrial policies have been characterised by ad hoc interventions in specialised manufacturing sectors such as aerospace or automotive; only the financial support to the City has been sustained over time, culminating in the bailouts after the 2008 Global Financial Crisis. In the hope to restart the British economy, Theresa May launched an Industrial Strategy in 2017, which however the Johnson’s government soon dismissed and never acted upon. The Plan for Growth, which replaced May’s strategy in 2021, is said to suffer from the same biases as previous industrial policy strategies, casting doubt on its ability to contribute to build a high-productivity/high-innovation economy.

Given the Conservatives’ ongoing leadership contest, it is unclear which parts of Johnson’s economic policies will be continued by the new PM. What does seem clear, however, is that none of the front runners – Rishi Sunak, Penny Mordaunt, and Liz Truss – have a track record of showing any awareness of the real problems that are plaguing the UK labour market and account for the low skills, wages, productivity equilibrium the country is stuck in; focussing instead almost exclusively on promising tax cuts. Until such awareness arises, UK labour market- and industrial policies will continue to be misdirected and workers have little reason to be optimistic about any Brexit benefits arising for them. 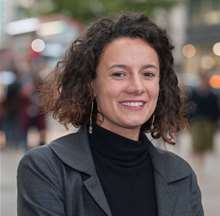