Merkel and Trump talking trade – what the people think

When Chancellor Merkel meets Trump the talks on trade are not going to be easy. The US President has frequently criticised Germany for running a current account surplus, thus allegedly harming the US. The risk that punitive tariffs on steel and aluminium will soon be extended to the EU continues to loom – and President Trump has already threatened further tariffs on German cars. But do these views reflect what the people in the US think? Do they want more protection? Do they believe trade with Germany is bad? What do the Germans think about this?

A survey commissioned by Bertelsmann Stiftung published on April 19th, provides some insight into whether the people actually subscribe to Trumpism or not. The quick answer is they don’t. But they while they overall think trade is good, some of Trump’s criticism seems to stick. 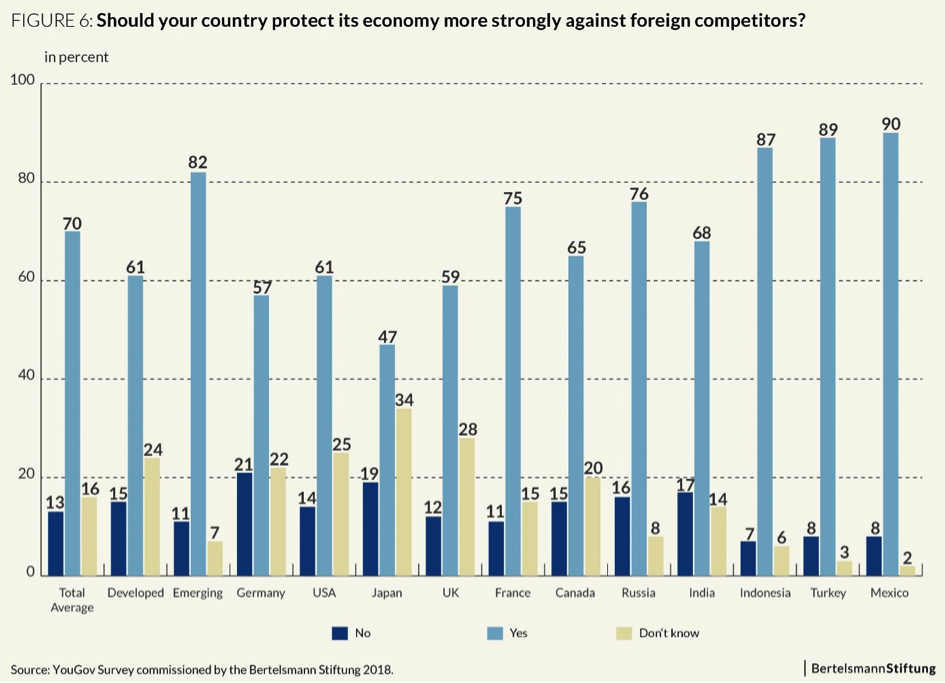 Taken at face value, Figure 6 above suggests that people in the US and Germany want more protectionism. In Germany, 57 percent say they want more protection from foreign competition, while in the US, the number rises to even 61 percent. What is however important to note, is that in international comparison, these values are actually fairly low. Which would not matter much, if people actually thought trade is bad – but this not actually the case, as Figure 17 below shows. This suggests that responses above are driven by some bias, leading people to perceive foreign competition as something threatening. And this bias is low in the US and Germany. 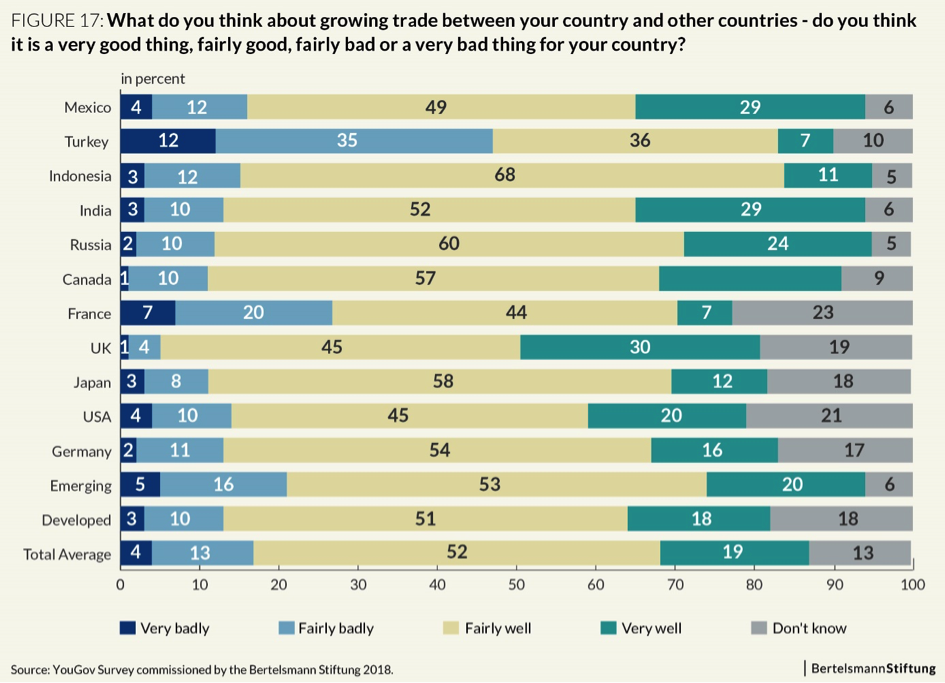 As Figure 17 makes clear, in both countries a large majority – even in international comparison – think that increasing trade is good for their respective countries. What is interesting though, is to look at a comparison with previous editions of a similar survey, which is presented in Figure 24 below. 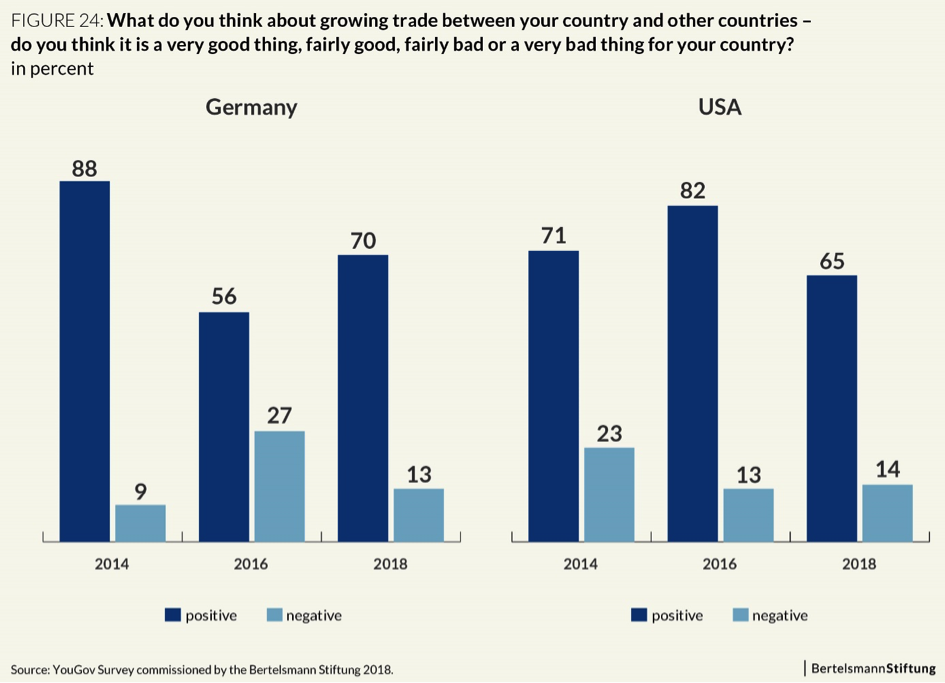 Several interesting insights can be inferred from this graph: First, support for trade in the US is on the decline. Since negative opinions on trade haven’t risen, more people have clicked the “don’t know” category. Which means that Trump’s criticism has deteriorated the confidence in the view that trade is good. Second, the two countries are on a different trajectory: In Germany, support for trade has historically very high but deeply impacted by the TTIP debate in 2016. From this exceptionally low value, it has now recovered. In the US, the strong support for trade in 2016 is now declining.

From these answer, it becomes clear that people in the US and Germany remain convinced that trade is good – and that increased trade with each other would be even better. But saying that Trump’s criticism doesn’t stick would be wrong: People in the US are now already less sure that trade is good for them than two years ago. Another question from the survey shows why: only 30 percent in the US feel adequately protected by their government against negative side-effects of globalisation, while 42 percent disagree. If people feel left alone with negative side-effects, it’s easy to turn them against globalisation and trade. 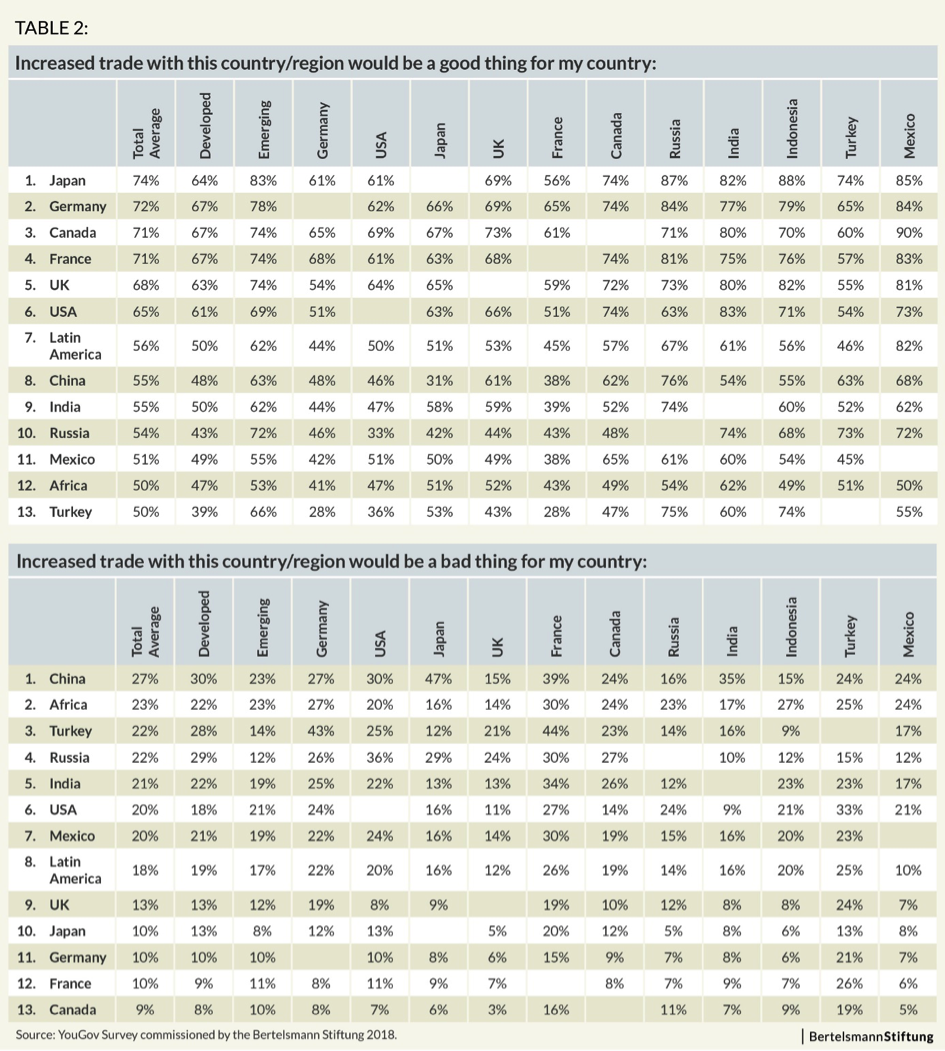 The complete survey can be found under this link: https://ged-project.de/research/studies/a-safety-net-to-foster-support-for-trade-and-globalisation/