One of the tendencies shared both by generals and British political leaders is to fight the last war. The classic mistake is to think that the next election will be determined by the same dynamics as the last. This can be the result of wishful thinking: Rishi Sunak clearly wishes he had the good fortune of his predecessor-but-one in facing Jeremy Corbyn. It can also be the result of fear: having been at the centre of a series of bracing defeats over the last decade, Keir Starmer and his team are determined not to make the same mistakes.

It is this fear of history repeating itself that has driven the Labour Party’s approach to Brexit under Keir Starmer. The knowledge that Brexit, and the promise to ‘get it done’, helped the Conservative Party in December 2019 means the party has been determined not to give their opponents any opening to suggest the party is flirting with substantially reopening the question of the UK’s relationship with the EU.

The idea of Brexit resurfacing as an issue might well be one that keeps Starmer awake at night. Yet the prospect that the issue of the UK’s relationship with Europe has not been resolved, and a critical mass of the electorate could in time support rejoining the European Union, is also a long-term benefit to Labour. After all, if a substantially closer relationship with Europe becomes a key demand of the British electorate, they are the only party in the market to lead a government who could supply it.

This tension between the short and the long-term for Labour is clear when you look under the hood at the opinion polling in the UK on Brexit. Our research at UK in a Changing Europe has found a surge in support for rejoining the EU, from 45% in February to 57% in October. This evidence, which corroborates recent poling showing increasing ‘Bregret’, has come principally from the voting groups that have trended to the Labour Party in the last decade: those with a degree, and those under 50. All age groups under 45 support rejoining by over 70%. There is roughly 30% gap in support for rejoin between those without a degree (40%) and those with one (70%). 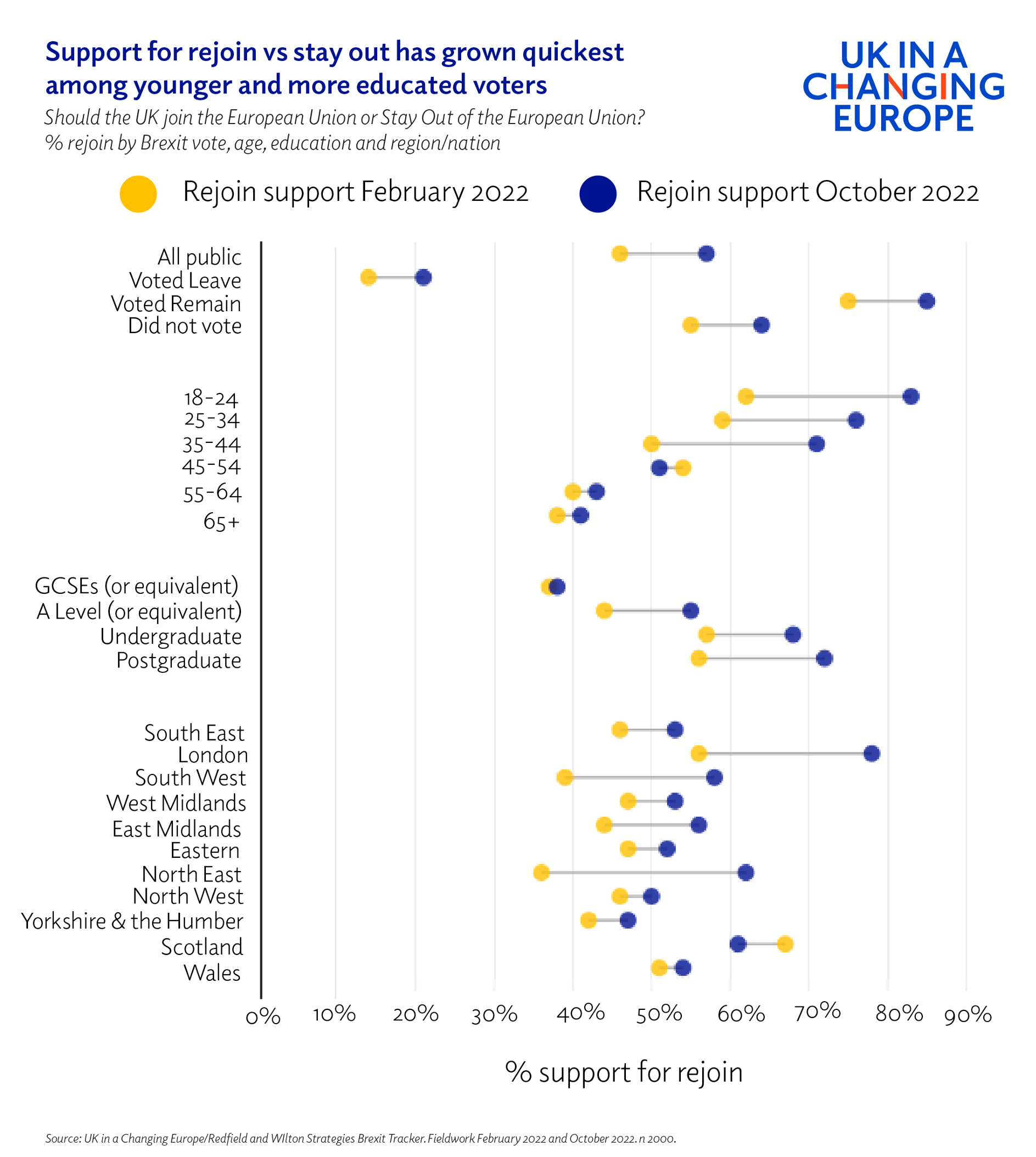 If this increase in support for rejoin gathers further momentum (and it remains an if, given none of our main or small political parties are advocating such a move) then the source of that momentum, a growing divide between young and old, and graduates and non-graduates, would pose a problem for Starmer. Among those who backed Labour in 2019, support for rejoin has risen from 65% to 83%, while it has gone up from 24% to 30% among Conservative voters. Starmer’s strategy is predicated on winning back voters who are simply much less likely to think Brexit is at the nub of the UK’s economic woes.

As a result, in the short-term, it is likely to make sense for Starmer to ignore the growing feeling both that Brexit was a mistake and that it should be reversed. However, the evidence suggests Labour could reach a tipping point in the next decade where ambivalence on Europe becomes unsustainable. At that stage, for Labour, Brexit will become a weapon to be utilised rather than a problem to be neutralised.