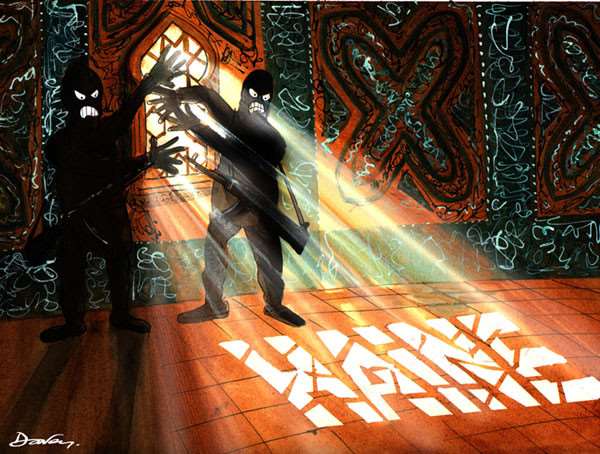 Original cartoon by the author

I am a cartoonist, so the events of last week in Paris have a strong resonance for me, not least because I really don't want to be killed by madmen.

It would be nice to be able to draw and publish whatever I want. However, I know that I have no absolute right to such freedoms. Rights are conferred by a society and often won through generations of struggle. And along with rights come responsibilities. In this case, that responsibility is to consider the readers' genuine sensibilities, as long as they are reasonable. Political cartoons should, to borrow Finlay Peter Dunne's journalistic adage, "afflict the comfortable and comfort the afflicted" or, put differently, afflict the powerful and provide some comfort, levity or retort for the powerless.

I have no desire to ridicule or insult Christians, Muslims, Jews, Hindus or Zoroastrians because of how they see their deities, as long as they profess tolerance and peace. But I would like to be able to point out the hypocrisies of organised religions, especially if their powerbrokers act irresponsibly, or foster disharmony. I would also like to be able to gently point out the humour in belief itself. I see this as simply holding a mirror to ourselves as human beings. Laughter is a healthy thing, essential to the good life.

In an Islamic context, I have no wish to mock the Prophet but I do want to show up the evil perpetrated by radicalised psychopaths (together with the evil perpetrated by western bombs). I prefer to do that without depicting Mohammed. In that, I differ from the cartoonists at Charlie Hebdo, for whom provocation was their tool of choice, but they, most certainly, should not have died for that. If offence is caused, we should all be mature enough to turn away and move on.

To the western mind, especially that of a cartoonist, Islamic aniconism sounds absurd in its wider form (banning all figurative art) and questionable even in its restricted form (banning representation of religious figures). That’s why it’s such a useful coat for radical Islamists to wear, hiding the real political motives that lie behind the terror. If the terrorists were guided by AQAP or ISIS then the real motivation must be political, presumably to seek to alter western powers’ domestic and foreign policies, radicalising more moderate Muslims and provoking the confrontation with the west that psychopathic zealots seek. And zealots care not a jot for the lives of their own co-religionists. Last week, some two thousand people were murdered by Islamist insurgents in northern Nigeria. Many of the victims were Muslims. But more importantly, they were innocent people. This was no religiously inspired act. It was a brutal act of political control.

Angry young men are convenient recruits to these causes. Living as part of an overlooked minority in western secular-Christian ex-colonial democracies, the emotional politics of exclusion mixes headily with the idea of glorious martyrdom; their bitter anger is given a gleaming veneer of righteous legitimacy. Who knows which of many boiling hatreds made the Kouachis pick up those AK47s? But whatever it was, they committed acts of evil, not redemption. The attraction of sophisticated weaponry to young men, whether real or virtual (in computer games), is a commonplace. When these men are disaffected and dissatisfied to the point of social exclusion, and have access to real weapons through criminal gangs or politico-religious zealots, the possibility of horrendous bloody crime becomes inevitable.

The graphic nature of the cartoon makes it more potent than the written word. Although they are rarely carried out, death threats are no new thing for political cartoonists. Angry men who want to be offended are everywhere. The thread that binds these people is not religion, but that they are, frankly, nutters. Anybody who seeks to kill another person because he (it is almost always "he") dislikes something the other has written, said or drawn is a psychopath, regardless of whether it is dressed up as religion or not. We should not be deterred from holding humour and graphic satire dear, despite psychopaths of all flavours. Although I hope nobody kills me simply because I draw things, I cannot prevent someone from doing so if they are very determined. The only weapon we cartoonists possess is humour. We need to carry on using it judiciously, directed at whatever abuse of power we can see, but ideally without gratuitously insulting the powerless.