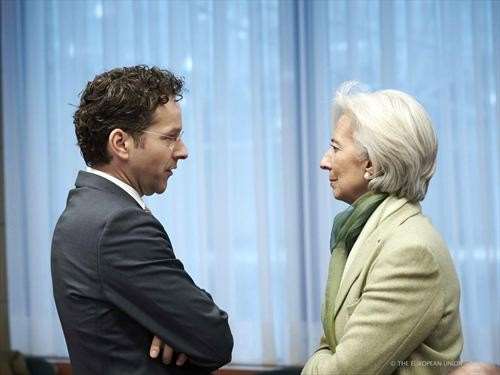 Jeroen Dijsselbloem, President of the Eurogroup, and Christine Lagarde, Managing Director of the IMF. Photo: The Council of the European Union

Euro area banks have shrunk their balance sheets every month since mid-2009 and the pace has accelerated over the past eight months. This coincides with – or, cynics might suggest, is driven by – the deadline for meeting the 9 per cent core tier 1 capital ratio imposed by the European Banking Authority. The speed of contraction in Italy and Spain is running at two to three times the euro area aggregate.

No one should doubt the scale of what is under way. The IMF recently increased its forecast of overall EU deleveraging, based on a sample of the 58 biggest banks, with the worst case now up from €3 trillion to €3.5 trillion. According to the EC’s recent economic paper (No. 472) on non-bank financial instituions, assets in the Monetary Financial Institution (MFI) sector of the EU27 (excluding central banks) total only €21 trillion.

Nonetheless, the political backdrop remains remorselessly negative for banking – and for bankers. Whether the newly agreed “bonus cap” under Capital Requirements Directive 4 will produce the behavioural results desired by its political advocates may be secondary to the impact of the new capital and liquidity requirements. The debate about bailing-in various classes of bondholders is not encouraging insurance companies to buy banks’ bonds in quantity, as they have traditionally done – particularly as they face their own revised capital regime under Solvency 2. At some stage, society has to balance its thinking on making banks, insurers and pension funds super-safe against the need for riskier investments.

Moreover, many of those investments need to be longer-term commitments. The G30 published a report that suggests western Europe will need to push its long term investments from 30 per cent of GDP to 34 per cent by 2020. As Lord Turner, FSA chairman, put it: “Some of our proposals are challenging or contentious, and would take time to implement. But their merits should be assessed carefully, given the importance of actions that explicitly strengthen the supply of long-term finance. For example, we are proposing that the Financial Stability Board explore the feasibility of new regulatory and accounting treatments for assets held with long-term horizons to avoid excess focus on short-term market volatility.” Will this tinkering be enough? Or is something more radical needed?

The chart, below, highlights the problem for the EU given that its financial sector, at €53 trillion, is more than four times its GDP. In a recent study for the European Commission, Non-bank financial institutions: assessment of their impact on the stability of the financial system, which I undertook together with London Economics, the conclusion was that the role of the Other Financial Institutions (OFIs) must be integrated into any radical solutions. Unfortunately, the OFI include a variety of institutions now demonised as “shadow banks”.

The central problem for society is that, if guarantees about capital certainty are to be given to citizens, there must be enough capital to back the guarantees. Unfortunately, the return on that risk capital is a direct reduction in the return to savers. If MFIs/banks are to shrink by €4-€5 trillion so that their capital ratios are high enough to make the chances of a call on taxpayers minimal, which sector can take on the assets? If life insurance companies or defined benefit pension funds step in, they, too, will need additional capital.

Maybe it is time for the financial system to go back to traditional basics: pool the risk-seeking part of citizens’ savings and invest directly into securities issued to finance long-term investing. That is easily said. Ensuring that investors are not beguiled with promises of returns from higher-than-understood risks is harder. As society reels from revelations about mis-selling and mis-conduct, it may be hard to separate demons from saviours.