In the last weeks, Europe's eyes have been fixed on Catalonia. The sequence of events that followed the referendum on October 1st are unprecedented in this part of the world, at least for decades. A wave of anxiety mixed with astonishment has crossed European public opinion and beyond. Many questions were raised. What will change? Will Spain be the same? And Europe? Undoubtedly, it feels like history in the making.

Many interesting contributions have analysed the Catalan case exploring its multiple implications. As the peak of the crisis appears to be behind us and Catalonia prepares itself for a true moment of democracy, it does not seem too hasty to offer a more personal perspective.

What happened in Catalonia has brought "borders" back to the forefront, showing the dangerous tensions that can still originate from them. Yet, had they really disappeared? Crimea, some reactions to the flows of migrants, and Northern Ireland after Brexit are among the most recent examples.

What are borders? A part of my generation struggles in understanding them in their old, historical, meaning. We were born after the collapse of the Wall, we are the generation of the "End of History", as well as the “End of Geography”, with Schengen and the golden age of globalization. Used to travelling, studying, and working almost anywhere across the continent, for us the passport is almost like an object for collecting stamps of faraway countries.

I still remember when I requested mine, at the threshold of adult age. Back then, I had already travelled quite enough in Europe and all the bureaucratic hassle to get the passport felt unnatural: I could not feel otherwise, because that was not my normality. My mother loves telling a story from my childhood, when, during the many summer hikes on the Alps, I enjoyed hopping back and forth on the boundary stone that separated Italy from Austria. Borders were just a game.

Norwegian explorer and anthropologist, Thor Heyerdahl, said that he had never seen one border, but he had heard that they existed in the minds of some people. While growing up, what came closest to a border for me was the Great River Po, which separates my hometown, in the south of Lombardy, from Emilia-Romagna.

Today, it is on another rive gauche - that of the Seine - where I wake up with dismay from the illusion of my generation: history has returned to Western Europe, and geography – its loyal companion – too. Frontiers have never disappeared; and border posts, empty in their appearances, have demonstrated a worrying ability to be re-occupied very quickly. 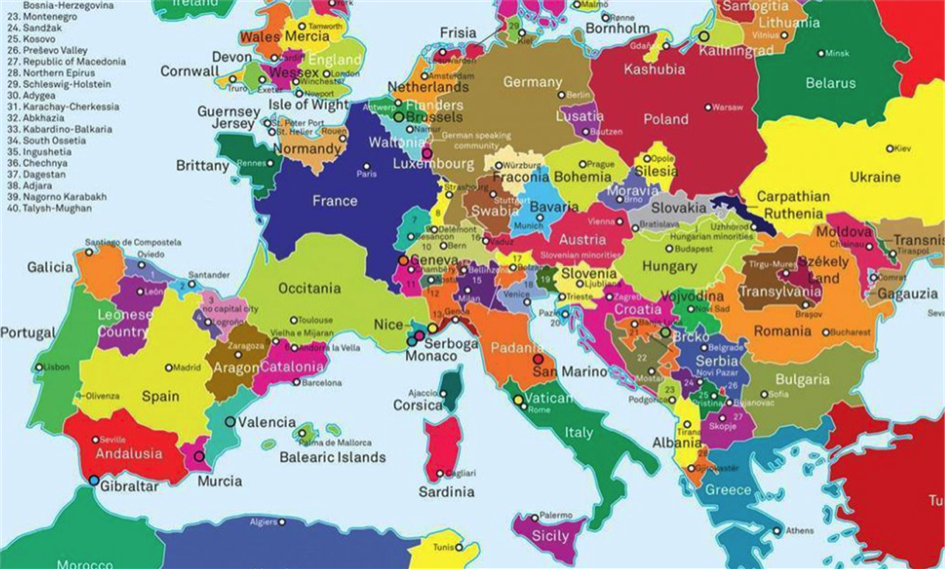 On the internet there is a map, created by a Reddit user, depicting how Europe would be if all the regional movements seceded: a hyperbole, but of great effect. The plethora of colours – and borders – helps grasp the contradiction of our time.

Thanks to Europe’s four freedoms, we have run quickly down the tracks of history. The removal of borders has allowed the multiplication of trade in goods and services, and the free movement of people. Having the same coins in our pockets spares us the annoying and costly procedures to exchange currency. Technological progress - and the obsession of velocity coming with it - has made us more connected, but not more united. Connections travel fast, not just in the web; identities, however, take longer. They are deeply rooted in proximity and take over in periods of great uncertainty, becoming a safe haven. The colours on the map should be a constant reminder of that.

In fact, the Old Continent is still full of borders. They are not necessarily signalled by physical signs or barriers; they are real in people’s minds nonetheless.

The wind of 'independentism' rising from Catalonia knows no border and threatens to re-kindle ancient and new divisions. Many of these are fuelled by the increasing difficulty of state actions to cope with supra-state phenomena. In retrospect, the Catalan question was probably a ticking bomb, but there is no doubt that Spain’s economic troubles have contributed to pull the trigger.

This tension between the state and regional levels threatens national unity; not only in Spain, but also elsewhere. If capable of returning something positive also for the more “sedentary” part of our societies, Europe can help solve such tension. It can blow it off and become the glue defining a new way of being together: less focused on states, precisely to preserve their cohesion.

Europe’s purpose is not to erase people's instincts, but to channel them, so that disputes can continue to be resolved not with gunshots, but with words; even harsh ones sometimes, but words nonetheless. It does not even seek to create a one-colour continent in terms of identities. On the contrary, Europe wants to enrich identities, adding an additional level to our sense of belonging: a sort of identity subsidiarity.

Europe had made us accustomed to be incapable of witnessing events like those coming from Barcelona, and the bewilderment they bring about is just a demonstration of how precious its founding values are. Europe has let us grow up with the dream of a truly united and borderless continent. Perhaps the mission of my generation is exactly this one: giving Europe the tools to make that dream come true.