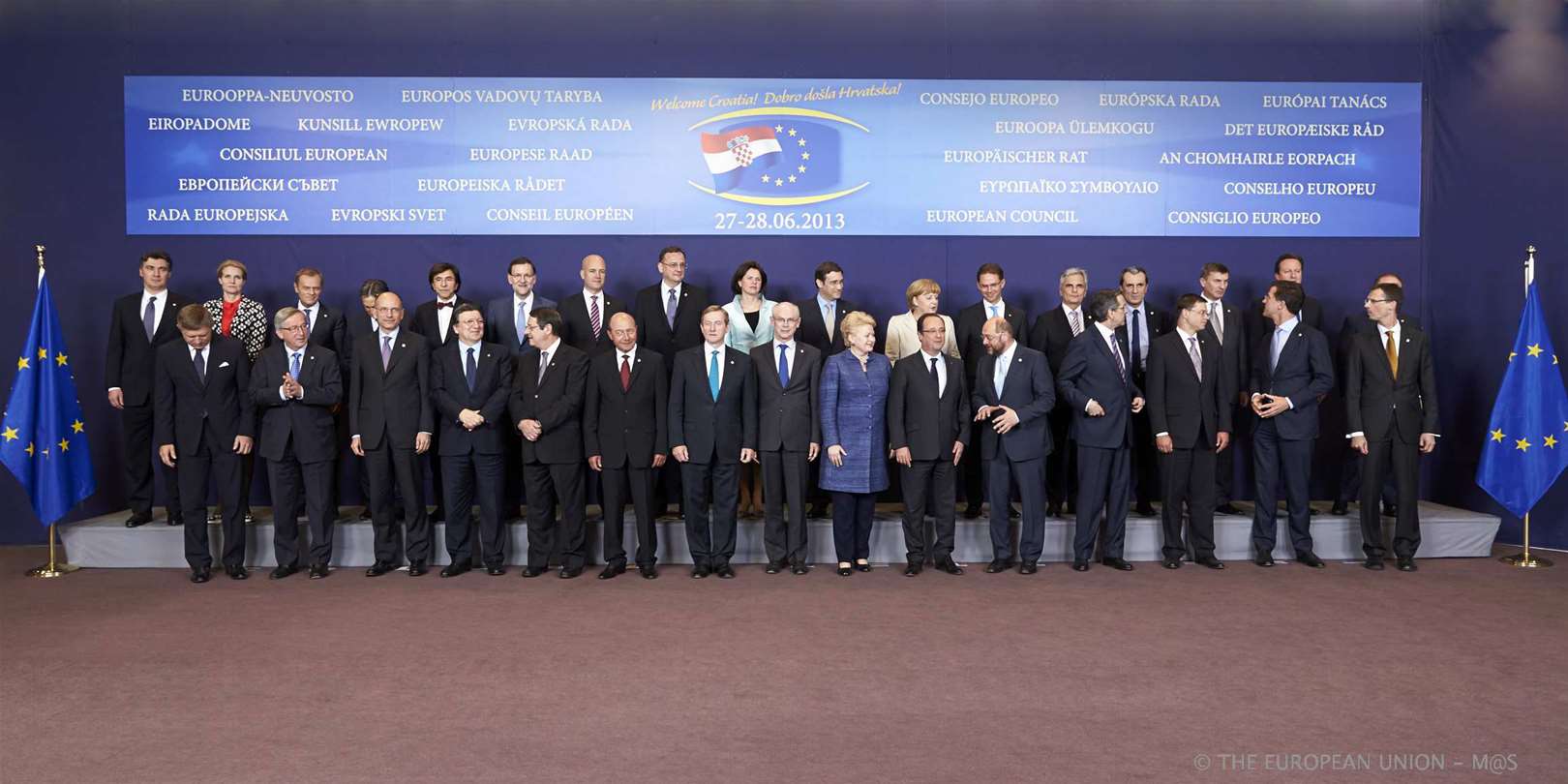 EU leaders at a recent summit. Photo: The Council of the European Union

The world has not been able to negotiate a new global trade deal for 19 years. After 21 years of climate talks, we have yet to find a way to reduce meaningfully the amount of carbon pouring into the atmosphere. And just 5 years after the worst financial crisis since the 1930s forged enormous political will to reduce the risks created by global financial flows, regulation is increasingly balkanized and, in many places, far too weak.

On a regional level, the European Union seems similarly paralyzed. While governments, aided by the European Central Bank, have been able to triage the continent’s economic crisis, few steps have been taken to address its underlying causes.

The institutions we rely on to solve global and European problems are less and less able to do so, even as the problems themselves grow worse. A common process underlies this gridlock. To see it, think about your last traffic jam.

After World War II, many countries set about building modern road networks. In the US, the interstate highway system, as the project was called, cut the time required to cross the country from weeks to days. This shift paved the way not just for cars, but for decades of economic growth, and led to fundamental changes in the nature of American society. People began moving to communities where you had to have a car, or two, to get around. Soon the existing roads became clogged, and more had to be built. But this just led to more people getting cars and moving further from urban centers, generating yet more traffic. And new kinds of problems emerged: vulnerability to gas prices, smog, sedentary lifestyles, etc. People began to spend more time sitting, gridlocked, in their cars than they spent with their kids. In other words, the postwar project to increase mobility succeeded extraordinarily, but in doing so created a new set of problems that road-building couldn’t solve.

The same paradox now afflicts other ‘interstate’ networks created after World War Two—our system of global governance through multilateral institutions. After the war the victors, led by the United States, built an extraordinary set of multilateral institutions. Bodies like the United Nations created a system of collective security, and the Bretton Woods institutions set the world on a path toward managed economic integration. Over the next decades a virtuous cycle ensued. Cooperation between countries allowed companies and individuals to forge connections across borders. These links increased mutual dependence, creating greater need for institutionalized cooperation to manage common problems. So states created more global bodies and treaties, new international organizations, international standards and regulations - thousands of which now exist, regulating most aspects of our lives. Cooperation undergirded globalization, and deepening globalization, in turn, required yet more cooperation to manage.

In Europe, the process of interdependence and integration was even more radical. An agreement to coordinate coal and steel production in France and Germany grew into the most transformative political project of the modern era.  As national autonomy was qualified by regional integration, the European Union became an unprecedented multilayered and multilevel polity.

For most of the postwar period, this process of “self-reinforcing interdependence” worked extraordinarily well, at least compared to any other historical period. It worked so well that multilateral cooperation—as happened with road-building—created complex conditions that halted and even undermined its own success.

We call this phenomenon gridlock, a basket of trends that is today making international cooperation more difficult, even as deepening globalization and interdependence mean that we need global cooperation now more than ever.

At the global level, four separate dynamics have combined to produce gridlock. First, the problems we are facing on a global scale have grown more complex, penetrating deep into domestic policies.  Second, the institutions created 70 years ago have proven difficult to change as established interests cling to outmoded decision-making rules that fail to reflect current conditions. Third, in many areas international institutions have proliferated with overlapping and contradictory mandates, creating a confusing fragmentation of authority. And last, these trends are compounded by the rise of new powers like India, China and Brazil means that a more diverse array of interests have to be hammered into agreement for any global deal to be made.

In Europe, the logic of gridlock is more specific. The decision to adopt a common currency allowed a radical increase in European economic interdependence. Some of this was planned and desired, such as the increase in intra-European trade and investment. Other elements were not foreseen. Most fatefully, European banks, buoyed by the fiction that risk had been equally distributed across the eurozone and beyond, bought large amounts of public and private debt from their neighbors. Once the financial market realized that the situation was untenable, this interdependence in turn required deeper political integration—perhaps unfeasibly deep integration. In the short run, it requires German taxpayers to agree to guarantee the borrowing of the Greek state and other debtor countries, and it requires the debtors to borrow and spend in a way that is acceptable to German taxpayers. In the long run, it requires some sort of fiscal coordination at the EU level. For some, this implies the EU’s capacity to enforce fiscal discipline. For others, it implies the EU’s capacity for fiscal transfers. The divergence between these perspectives is regularly on display in Brussels and across the continent.

Even worse, European gridlock and global gridlock compound each other. The Eurocrisis was triggered by shocks in an unregulated terrain of financial interdependence that could not be contained.  Bad home loans in the United States, in conjunction with a lack of strong global rules, precipitated the worst financial crisis since the 1930s, straining balance sheets from Iceland to Greece. At the same time, Europe’s inability to put its own house in order has deprived the world of a strong, unified voice for more effective multilateral institutions. To take just one example, at the crucial Rio+20 conference in summer 2012, a watershed moment for efforts to protect the global environment and a long-stated EU priority, European leaders were conspicuously distracted. Only Denmark, Sweden, Spain, and France sent their heads of state/government.

What can be done? Recognizing that gridlock is a general condition of global and European politics—not just an issue-specific blockage—is an important step toward designing effective solutions. But at the same time, it usefully cautions against a hope in “silver bullet” solutions. The problems facing global cooperation are long-term trends, and the solutions are likely to be equally gradual.

At the global level, several trends offer promise. First, even as traditional state-to-state international organizations stall new forms of cross-border cooperation that involve companies, networks of cities, NGOs and other types of actors are filling some of the “governance gap” gridlock creates. In most issue areas it remains to be seen how effective these new institutions can be, but they offer at least a partial solution.  Second, while gridlock trends make political leadership unlikely, they do not render it impossible. Space remains for individual policymakers or broad social movements to force change. The key here may be in new actors—or coalitions of actors—forging links across issue areas. The radical increase in interconnectedness that has overwhelmed our existing institutional “technology” may yet lead us to clearer roads ahead.

In Europe, the path through gridlock is clearer but not necessarily easier. To rally European citizens behind solutions, the benefits of European integration need to be made apparent to those who profit from them—especially voters in countries who stand to foot the bill. At the same time, hard deals need to be struck to build the fiscal integration a viable Europe requires. Frustration is likely to continue in the short-term. But policymakers should take a longer view, building the cross-border consensus on fiscal cooperation that will hopefully undergird the next phase of European integration.

These themes are explored in a new book by the authors entitled Gridlock: Why Global Cooperation is Failing when We Need it Most