Eight years after the Russian invasion of Georgia and recognition on 26 August 2008 of South Ossetia’s and Abkhazia’s ‘independence’, Russia continues its expansionist policies and occupation of 20% of Georgia’s territory. The international community has condemned the Russian occupation and adopted a strict non-recognition policy of the so-called breakaway regions. Despite this, the reality on the ground is that tens of thousands still see their basic human rights trampled and curtailed. Georgia calls on Europe to keep up the pressure on Russia and continue to support Georgia’s efforts to bring the territories and citizens back to their Georgian home.

Over 25000 Georgians were forced to flee South Ossetia in 2008 when their homes and villages were destroyed, adding to a community of 250,000 internally displaced from the separatist regions in the 1990s. They are still denied their indispensable right to return to their homes. Barbed wire fences divide families, split farms and cut off access to basic amenities. So called “border guards” regularly detain and “fine” those who attempt to cross. The population of South Ossetia dropped nearly 80% and those left behind find themselves trapped into a virtual ghetto or extended Russian military base.

The residents of occupied Abkhazia still risk their lives moving across the dividing lines through so called “check points”, as was exemplified a few months ago when an Abkhaz “border guard” shot and killed an IDP, the father of two young children.

The outlook for addressing the desperate humanitarian situation in the occupied territories per se is limited. There is no international presence, no human rights or international security mechanism on ground, and no sign of the occupation forces agreeing to such presence. Contrary to what had been agreed, the EU monitoring mission cannot enter the occupied territories. The conflict is anything but “frozen” for the local population.

Russian dominance in both territories is perceptible in almost all spheres of life. Many in the occupied regions, especially in Abkhazia, are now openly critical of the situation as they fear the loss of their identity under ongoing “Russification”, especially with the so-called “alliance” and “integration treaties” presaging the full de facto annexation of the regions by Moscow.

The ethnic Georgian population in Abkhazia is particularly vulnerable. Policies which have seen their basic rights curtailed or denied – to education, to speak Georgian, to property, work and residence – are evidence of ethnic discrimination.

As time passes, it is becoming increasingly obvious that the status quo does not serve the interests of either the Georgian, Abkhaz or Ossetian people, but only of the Russian state. Russian policy across the EU’s Eastern Partnership region – where five countries out of six suffer from so-called “frozen” conflicts –  has been to create a series of enclaves suspended from the reach of international law, militarily occupied and instrumentalized to advance Moscow’s power, interests and influence.

For Georgia, peace is the only possible conflict resolution policy, as our primary goal is the reunification of our people. For this we seek the end of Russian occupation but also prioritize reconciliation through dialogue with Abkhaz and Ossetian societies.

Georgia enjoys the support of the international community for its territorial integrity and sovereignty as well as its reconciliation policies. The EU’s support for Georgia’s reform and development through European integration is also the best possible stimulus for reconciliation as well as long-term peace and security in our region. The government of Georgia is keen to ensure all Georgian citizens, including in the occupied territories, can share in the benefits of our development and European integration, such as better education, healthcare, travel or economic opportunities. While we seek long-term solutions to the conflicts, this can provide essential humanitarian relief and tangible benefits to the people of the occupied regions, as well as a promising vision for the future as part of a modern European Georgian state, which respects and thrives on diversity.

We have made considerable progress in recent years in implementing this vision. Despite the challenging wider regional security context, Georgia today is safer, more democratic and more prosperous than ever before. We look forward in particular to the EU’s timely decision on visa-free travel for all Georgians, which will provide a major boost to this process. As we move forward, we are committed not to leave behind our compatriots in South Ossetia and Abkhazia. It is only a human – humanitarian – approach which will underpin lasting peace and security in Europe. 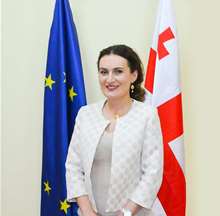