One year ago, the Eurozone was diagnosed with serious divergence in the so-called five presidents’ report (FPR). This document was noticed by too few at the time of the storm created by the third Greek bailout. Those who paid attention saw that Jean-Claude Juncker, Donald Tusk, Mario Draghi, Jeroen Dijsselbloem and Martin Schulz actually outlined some very important arguments for revamping the EU’s economic and monetary structures.

Excessive focus on Greece never helped putting a proper analysis of the EMU on the agenda. But it is high time to ask why since 2011 the EU economy decoupled from the US, why countries keeping their national currencies are more dynamic and stable than those in the euro area, and why the EMU remains so unbalanced and fragile despite investing so much political capital in stabilization and reforms.

No doubt, Greece has been and remains the weakest link in the Eurozone, and there are many internal reasons for that. However, the shortcomings of the whole EMU architecture also require attention, before continuing weak economic performance and future disturbances destabilize the system again, with an increasing likelihood of disintegration.

When Europe’s crisis is mentioned today, people most likely associate it with the so-called refugee crisis, or perhaps the high risk of Brexit. However, the European Union was already unstable before the 2016 refugee wave arrived and the re-election of David Cameron made it certain that a major Member State would hold a referendum about continued EU membership.

The Eurozone crisis made it harder to deal with the other two challenges. It weakened the administrative capacity of Italy and Greece to deal with the crowds of refugees. And it gave a lot of amunition to UK Eurosceptics who wanted to prove: "the EU is not working“. It just boosted unwelcome migrant flows from the South to the UK and made it harder to reduce the level of immigration, and many Britons became disaffected when they saw how the community treated its most unfortunate member, Greece, in the Summer of 2015.

It is therefore high time to explore the forest behind the tree. The Eurozone has not been in a state of recession for some time, but it has not experienced a proper recovery either after the double dip. Angel Gurria, head of the OECD, speaks about a vicious circle driven by falling investment and increasing imbalances, resulting in the erosion of human capital, economic competitiveness and fiscal health.

Arguably, this vicious circle cannot be broken without further reforming the Economic and Monetary Union (EMU). As long as core countries are allowed to accumulate ever greater surpluses, while periphery countries can only rely on internal devaluation in bad times, the Eurozone will remain wedded to low growth, deepening asymmetries and vulnerability.

Post-war European monetary cooperation disintegrated twice: once in the early 1970s, and then again in the early 1990s. We learned in recent years that the abolition of national currencies in itself is not a sufficient guarantee against another disintegration of the single currency area.

At times of crisis and heightened speculation, a possible break-down, or dissolution of the euro has been mainly discussed in terms of a crash of one or several member states and the resulting need to introduce a new national currency. This is, however, not the only way the single currency could die. 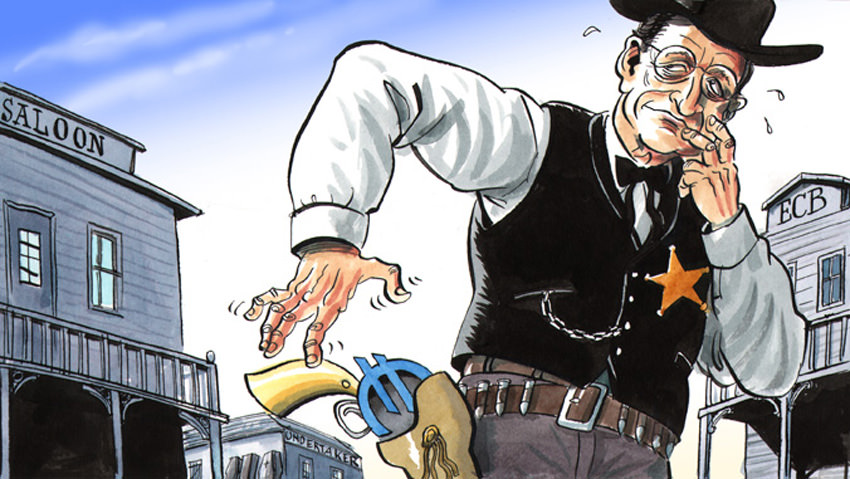 Just like the life of humans can end in various ways, a currency union can also be a victim of different diseases. Cancer does not kill the same way as a heart attack. Through reforms (notably the Banking Union) and one-off, discretionary measures (by the ECB mainly), the risk of a heart attack has been diminished. However, the risk of cancer is still there, and has probably increased in the meantime.

The divergence that has developed within the euro area between core and periphery is indeed the main threat to the existence of the single currency and to the stability of the EU as a whole. Hence, there is a need for further strengthening of the EMU architecture, and in particular to strengthen its real economic performance and its social dimension.

This ambition should go beyond securing the short-term survival of the single currency, which was the pattern in the 2011-3 period. Without an improvement in real economic and social outcomes, rising nationalist sentiment will continue to turn against either the single currency, or the EU, or both. Democratic governability in Southern Europe is at stake.

Rebalancing the Eurozone is a key question. Various models of rule-based, through limited mechanisms of solidarity have already been explored by think tanks, in order to strengthen people’s and markets’ confidence in the euro, and thus create a better institutional foundation for the recovery of investment.

Hostility around bail-out programmes and their conditionality have not created a good atmosphere in which more solidarity could be easily promoted, especially if it involves various forms of fiscal transfers. However, there is virtually no serious assessment of the functioning of the euro which would see a chance of long life without a fiscal capacity and risk sharing, ideally in some form of automatic stabilizers that can limit the damage from cyclical downturns. Unemployment insurance (or re-insurance) is a well-developed option for such a function.

Hence, before we get too close to national parliamentary elections in major countries again, and while the third Greek bail-out agreement delivers a certain degree of tranquility, we should use the window of opportunity to discuss a substantial reconstruction of the EMU and make some crucial steps in practice. The work ahead should not only focus on avoiding another heart attack, but on changes needed for truly improving resilience, performance and cohesion.

Beyond occasional bail-outs, there are several broader issues awaiting debate and answers. Should we see the IMF as a permanent participant in EMU stabilization, or we will reach a point soon when the Fund is not needed any longer as a lender or an analyst of debt sustainability? Can the ECB be defended from constant legal challenges when it acts in defense of the integrity of the single currency? Can we find the right balance between external support and national responsibility (and bankruptcy if needed) without the risk of contagion and disintegration?

There should also be a way to better articulate economic policy for the euro area as a whole, in order to optimize policy coordination for growth together. Member states should not be allowed to pursue arbitrary targets (e.g. “black zero”), or accumulate excessive current account surpluses, if those are detrimental to the community as a whole. Establishing a chief economist has been considered for some time, but concrete steps have proven just too difficult, similarly with the external representation of the euro.

Better governance is necessary (e.g. joint action against excessive imbalances), but it is not obvious that member states would hand over competences to a stronger EMU level governance structure without more risk sharing. This would also help strengthen public acceptance of the EMU. Strengthening discipline, solidarity and legitimacy simultaneously would probably pay-off economically as well as politically.

Perhaps a dramatic momentum is not here now for a sudden paradigm shift. But the time is right for a serious and deep reflection. In fact this might be the last time when the road forward towards a more perfect EMU is still open. If this chance is missed, and divergence and asymmetries are not dealt with, continuing stagnation will turn even greater shares of the electorate against the euro, and in a few years the only choice will be between orderly or disorderly deconstruction.

The 2012 experience should not be forgotten. Four years ago, the intervention of the ECB turned out to be a game changer. Without it, the Eurozone would probably have quickly disintegrated. However, the ECB only managed to change the game at the level of survival. Today this is not sufficient. What we need are significantly higher rates of growth and a return to real convergence.

The key question, however, is whether there is still sufficient political capital left among mainstream political forces to promote solutions that can counter the internal imbalances and divergence between the core and periphery within the Eurozone. A game changer for investment, growth and rebalancing is needed, and most likely it will be found in the area of fiscal capacity.