The European Commission’s autumn economic forecasts paint a bleak picture. The headline is cautiously optimistic. European growth is moderating but should improve in the forecast period thanks to an accommodating monetary policy, a neutral fiscal stance, and a gradual relaxation of ‘headwinds’ coming from other parts of the globe. The analysis itself is more troubling. European growth relies excessively on external markets; price inflation will recover as commodity prices stabilize at low levels; and monetary policy accommodation in Europe contrasts with a gradual tightening in the United States with uncertain implications for market volatility and global capital flows. The bottom line is that things may get better and yet then again they may not. Although the authors of the forecast would argue otherwise, this is not a message that offers much hope.

Let’s start with Europe’s export-led growth model. The basic idea is that demand in Europe’s major export markets will recover gradually toward the end of 2016, offering disproportionate gains for European exporters. In the meantime, European monetary accommodation will continue to put downward pressure on the euro and so bolster competitiveness even as the weakness of commodity prices – energy in particular – holds down the relative cost of exports. This seems a winning formula provided that external markets recover quickly.

But such reliance on export-led growth leaves a large number of factors outside policymakers’ control. It also constrains the resources available to repair both government finances and household balance sheets. The European Commission argues that fiscal policy is neutral even as household continue to deleverage. The current account data show that the euro area is exporting savings worth roughly three percent of gross domestic product. (The financial account data give the composition of those exports, a growing share of which are going into foreign bonds.)

Those capital exports are happening now, while economic performance in European export markets is lacklustre. Any headway in repairing government and household finances is coming at the expense of European growth and investment. That is a giant bet by European policymakers on the future performance of global markets. If that bet proves mistaken, they will have little to show for almost a decade of effort since the start of the global economic and financial crisis. 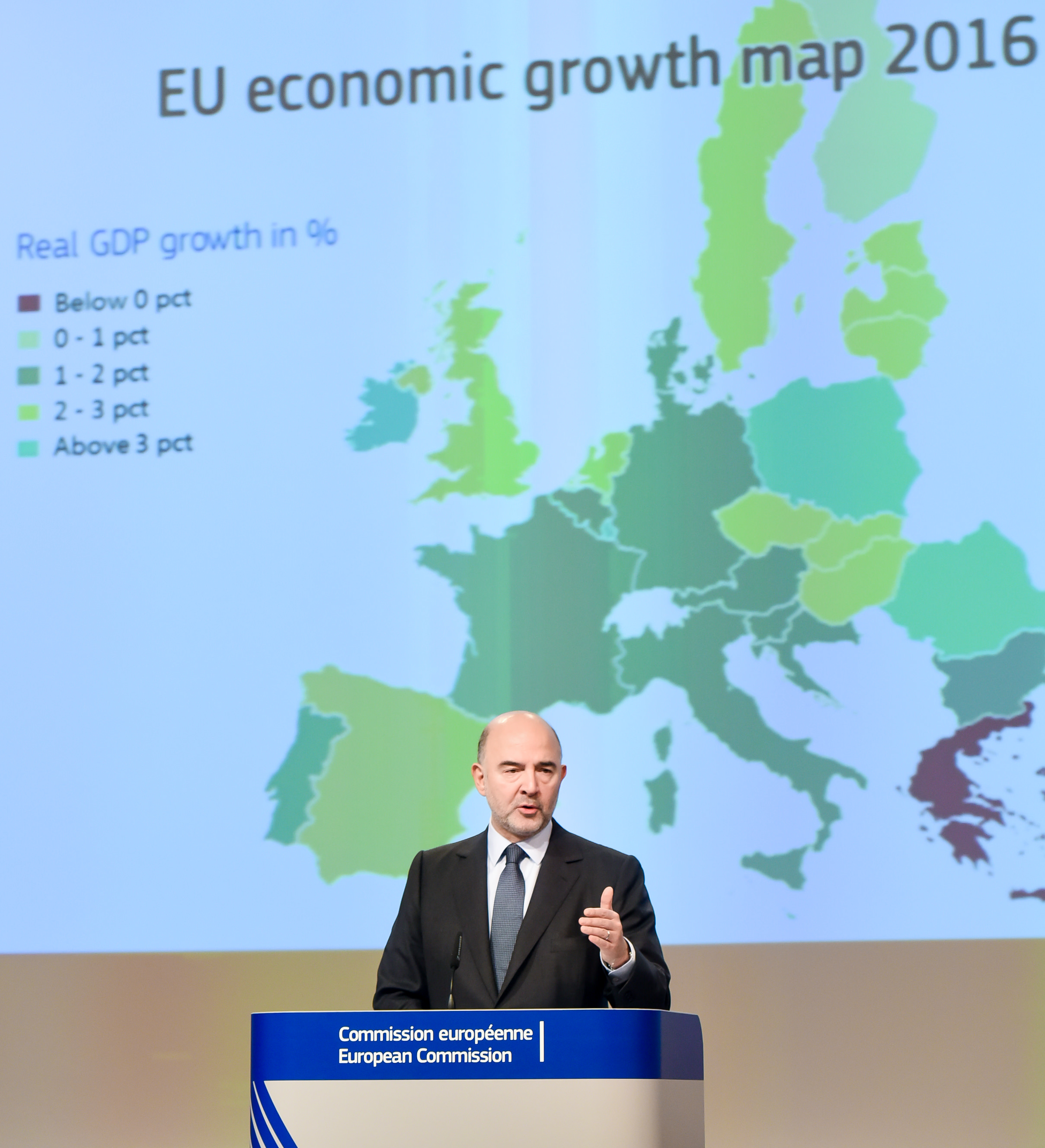 The real economy is where things get complicated because it involves a four-step argument that touches on policymakers, private sector actors, emerging market economies, and advanced industrial economies. Looking first at policymakers, the European Central Bank is under pressure to respond to the current low pace of inflation by reinforcing is ‘monetary accommodation’. That means it is looking for ways to push liquidity out into the euro area economy through an extension of its large-scale asset purchasing program and perhaps a further reduction in the (already negative) deposit rates it offers to commercial banks.

This very liquid, low-interest rate environment is confusing for private sector actors because they see the sluggishness of European economic performance and so find few opportunities for investment. Hence European central bankers complain that their monetary instruments cannot work unless there is some domestic demand for credit – which is increasing, but only slowly and from a very low base. As a result, the ultra-loose monetary policy creates incentives for actors in the private sector to export their savings. This is good because it puts downward pressure on the exchange rate but it is bad because this savings is not used for investment at home. European central bankers also complain that the ‘exchange rate channel’ for monetary stimulus has reached the limits of its effectiveness.

The problem is that Europe is simply too large for the rest of the world to pull it back into recovery because the rest of the world depends upon Europe as well. This interdependence can be seen in the narrow context of commodity prices. Put simply, the sluggishness of European economic performance puts downward pressure on commodity prices – because Europeans consume fewer commodities (and use less energy) when European economic performance is slow. (As the World Bank notes in its commodity price forecasts, that slow growth is not limited to Europe and is only one of many ongoing factors holding down commodity price growth.) Households and firms benefit because the low level of energy prices add to the purchasing power of their incomes. To the extent to which European households and firms use this money to pay down their debts that is a good thing. It is also likely that this money simply adds to the savings that Europeans are sending abroad.

The money flowing out of Europe can go to emerging markets or to advanced economies. Let’s start with the emerging markets. Some of these countries grow because they sell manufactured products to advanced economies like Europe. In that case, they are weighed down by the slow pace of European economic performance. Some of these countries grow because they export primary commodities. In that case they are hurt by the recent commodity price falls and also by the implications of slow growth in Europe for commodity prices. And some of these economies grow under their own steam or as part of an emerging South-South pattern of economic interdependence. The first two groups of emerging market countries are going to offer limited investment prospects, at least in the short-to-medium term; the third group is going to be a zone of intense competition. This poses a number of challenges for European investors to identify areas of solid growth potential and to avoid getting caught up in emerging market bubbles.

The question is whether advanced industrial economies offer better investment opportunities for European savings. The answer depends upon the rate of interest being offered. Here is where U.S. monetary policymakers become important. Unlike their European counterparts, U.S. policymakers are also faced with the challenge of navigating simultaneous fiscal consolidation and household deleveraging. Nevertheless, as a run of recent data reveals, the domestic recovery from the crisis is gathering momentum. As a result, the U.S. Federal Reserve is looking to pull back from its ‘monetary accommodation’ and to start raising interest rates rather than lowering them. Moreover, they have been signalling this intention for a long time and so market participants are eager for the Fed to get started with its monetary tightening. Already, we have seen a large surge of capital flowing from emerging markets to the United States in response. That flow of capital should continue as the Fed starts to implement its monetary tightening and the gap between Fed policy and what other central banks are doing starts to widen.

The European Commission is aware of this dynamic and like many economic forecasters it is hoping that the start of monetary tightening in the United States will reduce any remaining uncertainty about the timing for Fed action and so restrain market volatility. In turn, more stable markets should create fewer problems for global trade. That is a real possibility but all other things being equal the timing of Fed action is hardly the only source of market volatility and so any hope that this particular reduction of uncertainty will ease global commerce is misplaced. Moreover, the steady flow of savings from emerging market economies and from Europe to the United States in search of higher rates of return will continue to widen the gap between the three different parts of the global economy – strengthening the need for monetary tightening in the United States to counteract the inflow of liquidity while drawing additional resources out of Europe and compressing performance in emerging market economies.

In order to buy into the hopeful message written into the European economic forecasts, it is necessary to find some mechanism that will strengthen investment in Europe while bolstering growth (and demand) in emerging market economies. European policymakers can only influence the first of these two elements directly. Moreover, monetary policymakers have reached the limits of their abilities. Yet so far we have seen little progress moving fiscal policy in Europe from ‘neutral’ to stimulus and we have a long-time to wait for any impact to filter through from the pan-European investment projects headlined by European Commission President Jean-Claude Juncker.

Instead European policymakers appear to be betting that a spontaneous recovery in emerging market economies will provide the engine to pull them out of their current mess. A U.S.-led recovery is the implicit default option. That is what we are actually witnessing. Unfortunately, recent history shows that relying too heavily on the United States to provide both the investment opportunities and the consumption to drive world economic performance is not a winning proposition. This is hardly the first time I have underscored this problem. The analysis underpinning the recent Commission forecasts suggests a continuing triumph of hope over experience.