Can the UK speak the language of German reform? 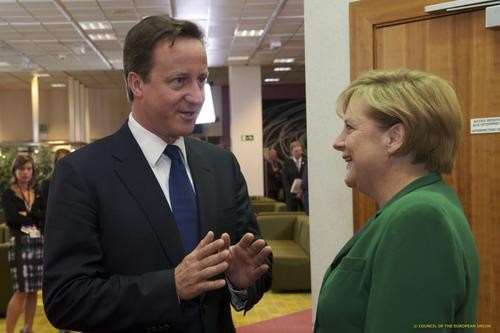 David Cameron and Angela Merkel. Photo: the Council of the European Union

When the German Chancellor recently talked about the “EU giving something back”, ears pricked up in London. Suddenly, a repatriation of powers was on the agenda. Ever since, though, Germany-watchers have been smugly dampening expectations. Mrs Merkel wasn’t talking Whitehallish or Cameronish. She was speaking AfD-ish, and possibly Seehoferish, and maybe even a little Ruttish, but not Whitehallish or Cameronish.

Or put another way, the lady was stealing the clothes from Germany’s new Eurosceptic party, Alternative für Deutschland, she was possibly reaching out to her tricky Bavarian sister party and its resurgent leader Horst Seehofer, and maybe even sending signals to the Dutch government of Mark Rutte unhappy at the course of Eurozone policy and involved in a parallel review of competencies. She was not – was not – talking to the British.

So is that the end of the story? It shouldn’t be. German diplomats suggest that European competitiveness and continued British EU membership count amongst Merkel’s core goals for the Europe. That means she will have to find a means of engaging London, even if she has no appetite for a messy process of treaty reform. Even Jose Manuel Barroso is doing this, recognising in his recent State of the Union speech that reform questions are now mainstream.

And yet, tellingly, Barroso also berated the British Chair of the Conservative and Reform Group in the European Parliament for his strident position on the EU, with Martin Callanan clearly enjoying being singled out. It shows that the onus is on the British: London is saying the right things but in the wrong way, and has so far succeeded only in marginalising the reform agenda. Five ways for us to talk better German:

First, ditch the official speak. The Commons and the government recently agreed that British ministers are a liability in Europe, alienating friends and sympathisers. And both agreed that our officials - well briefed and ruthlessly efficient - are the secret of our success. Yet, the reverse is actually true. If the British are unloved in Berlin it is not because of our politicians - they are taken with a pinch of salt. It is our officials - too busy congratulating themselves on their speaking points and deliverables to have a proper conversation with their counterparts.

Second, drop the idea of joined-up policy and Chefsache. The UK’s best interlocutors in this reform effort will probably be a disparate group of ministers and officials spread throughout the ministries of foreign affairs, energy and finance and even an interior ministry revamped for the country’s 2017 EU presidency. These classic pro-Europeans are better disposed to the UK than a Chancellery filled with divide-and-rule pragmatists ready to side-line a dissenting Number 10. Better a disjointed chat than a hostile one.

Third, learn to love coalition government. Ever wondered why Berlin can be more tolerant of Sofia or Budapest than of Prague or London? Party families. Germany is a party democracy, and its well-funded parties have built links with counterparts across Europe. The Tories chose to break off links with them in 2009 when they set up their own group in the European Parliament along with the Czechs. But coalition government, and the burgeoning cross-party reform efforts, open new channels to Germany.

Fourth, do try to take the French and the Poles seriously. We British are more likely to play Europeans off against each other than work with them. Yet, France and Poland are classified by Berlin as ‘indispensable partners’, and when the UK (a ‘nice to have’ partner) exploits tensions between them, Germany closes ranks. Moreover, since the French will only permit a reform if they believe it will further weaken marginal members like the UK, and the Poles will block it for precisely the same reasons, it is worth engaging them both.

Fifth, put our money where our mouth is. Merkel won’t take this reform effort seriously if we don’t. For instance, one German expert runs through the scenario of repatriating EU farming subsidies – an agenda dear to British hearts. The French, he says, will demand the end of the British budget rebate, meaning that Germany, Austria, the Netherlands and Sweden will all be under pressure to give up their rebates too. Is London ready for this? Berlin doesn’t think so.

Taken together, all this would involve us subordinating our officials to parliament, decentralising government away from No. 10, encouraging mature cross-party dialogue, taking a break from Balance of Power thinking on the continent and finally truly committing to a reformed EU. How very European. How awful?

This oped is based on a recent piece in "EuropeWatch"