Can politicians get their act together to give the British public what they really really want on Brexit?

Last year we channelled our inner Spice Girls when we wrote about our study that asked the British public to tell us ‘what they want, what they really really want’ from Brexit. We’ve now followed up on that research, and in what is almost certainly stretching the “Wannabe” comparison to breaking point, our latest conclusion could be interpreted as a message to elected officials: ‘get your act together, we could be just fine’.

Allow us to explain. Our 2017 study asked nearly 1,000 people to make choices between different possible options for the future relationship between the UK and the EU, using an approach catchily known as stated preference discrete choice experiments. That’s a bit of a mouthful, but it essentially enabled us to quantify just how much people value different aspects of the relationship, when considered as part of an overall deal.

A key finding of that study was that the British public didn’t want to just fall out of the EU; they wanted a deal, specifically one that allows access to the Single Market for goods and services. They felt this was so important that they were willing to give up restrictions on freedom of movement in exchange for this access.

By following up and repeating this exercise with a majority of the people we surveyed last year (as well as running it with some new ones), we’ve found that the same still holds true in 2018. This wasn’t a given – people’s priorities could have changed in light of how the negotiations have unfolded.

Crucially, the “packages” of options that we presented to respondents did not have labels that might have taken on specific and possibly inaccurate connotations in the public debate, such as “hard” or “soft” Brexit, or “Norway” or “WTO”.

Nevertheless, when we looked overall at the results, we did find an apparent “softening” in terms of the public’s preferred type of Brexit. 52 per cent of respondents now say they would vote Remain in a referendum (as opposed to 48 per cent in the 2017 study and the actual 2016 referendum). More interestingly, given the choice of four unlabelled options described by their key attributes only – specifically the choice between remaining in the EU, joining the EEA (similar to Norway), remaining in the Customs Union but not the rest of the single market, and no deal, falling back on the rules of WTO – the most popular option is joining the EEA with 43 per cent of people choosing this option (see Figure). This is the preferred option for nearly half of the Remainers and nearly a third of Leavers. This was also the most popular option for Remainers in the 2017 survey. The next most popular option for the whole sample is remaining in the EU (25 per cent of the people in 2018 preferred this option), followed by the WTO/no deal option (22 per cent of the people in 2018 preferred this option).

We also find that half of respondents change their preference for the four unlabelled options between 2017 and 2018, with 30per cent opting for a softer Brexit and 20per cent for a harder Brexit. One in five of respondents who said they voted Remain in the June 2016 referendum, have shifted from the EEA option to Remain between 2017 and 2018, suggesting that in the past they were willing to accept a ‘soft’ Brexit, but have now reverted to their referendum voting preference. We also see a softening of preferences for those who voted Leave in the June 2016 referendum, between the 2017 and 2018 surveys. For Leave voters, the percentage opting for the EEA option has increased from 24per cent to 34per cent and is now on a par with support for a ‘No Deal’ option (which is now on 39per cent). But support for the harder Brexit options has grown among voters with no education qualifications, with 45per cent of them moving towards a harder Brexit option between 2017 and 2018 (we also note that those respondents without education qualifications had a much higher propensity to switch between options than other respondents).

So a majority of the British public still want a Brexit deal, albeit one that is “softer” than that which they preferred a year ago. Of significant concern is that, currently, none of the major political parties supports what is the most popular option as revealed in our study – being a member of the EEA. The Conservative government’s Chequers proposal is not specific enough to analyse properly, but it is unlike an EEA arrangement in many ways, not least its red line on ending freedom of movement. The Liberal Democrats, on the other hand, advocate remaining, which was chosen by only 25per cent of respondents. And the Labour party propose something that is closest to the least popular option, leaving the EU but staying in the Customs Union, which was chosen by only 11per cent of our sample.

This leaves political leaders with a lot of ground to make up if they’re to meet the British public where they currently stand on Brexit. Can they get their act together? Will it be just fine? We will soon find out.

The full report can be found here.

Figure: Changes in voting preferences (between 2017 and 2018) for four unlabelled options for a deal on leaving the EU 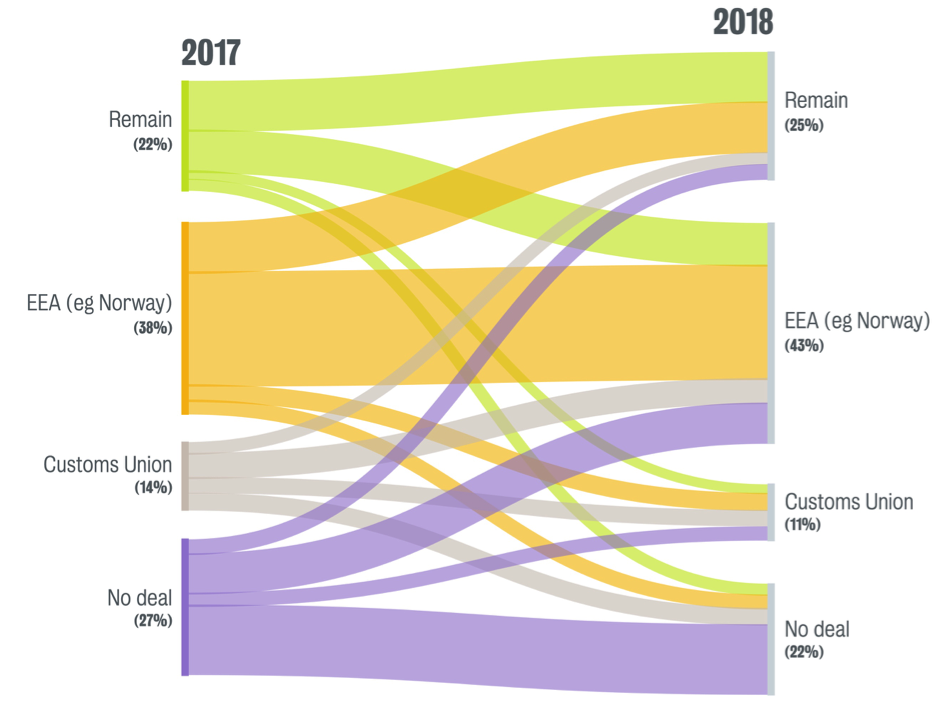