Can an in-out referendum solve the European question in British politics? 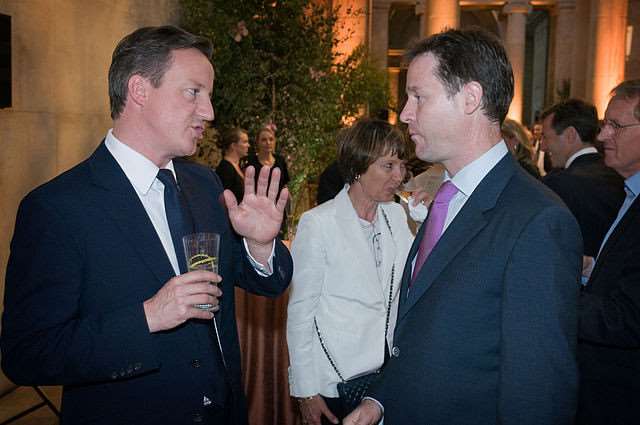 The prospect of an in-out referendum is one we all know will figure in the UK’s forthcoming general election. The average British voter might care little for the nuances of EU membership, or even say the issue ranks high in their election priorities. But it weaves itself into so many issues that we can expect it to be up there in the headlines, especially with the Conservatives, Labour, Liberal Democrats and UKIP all committed – in varying ways – to holding an in-out referendum.

It is hoped that a referendum can allow the British people to once and for all solve the question of Britain’s commitment to Europe, providing a cathartic, decisive decision whether it be to stay or go. Given such expectations we need to take a step back and realise that all sides – both Eurosceptics and pro-Europeans – risk expecting too much of a referendum.

The European question is a multifaceted one driven primarily by Britain’s domestic politics. It was for this reason that when I recently wrote an article on this topic for International Affairs, the Chatham House journal, I gave it the title ‘To be or not to be in Europe: is that the question?’ In short: no. Britain’s European question is connected to a range of issues – constitutional change, changing identities, political economy, fragmenting party politics, responses to globalisation and the changing geopolitics of Europe – not simply whether Britain wants to be formally in or out of the EU.

First, let’s not kid ourselves into believing that any UK-wide referendum as they are currently run can be a neutral constitutional procedure that accurately captures public opinion. A referendum is a political tool, used by the government of the day to manage internal tensions within a governing party or coalition. It will be for the Prime Minister to decide the timing and the question. A UK referendum will not be about consulting the British people; it will be about holding a party or coalition together.

Putting aside such political manoeuvrings, we still have to ask if a referendum can do the job of securing public consent. Countries that hold regular referendums on Europe, Ireland and Denmark for example, appear to have a more settled relationship with the EU. This may be so, but the UK will need to hold more than one referendum to replicate their experiences. That both Ireland and Denmark have rejected EU treaties does not bode well for hopes the British can grow to love the EU by being consulted on it more often.

It is Britain’s feelings towards the EU that could be the hardest to shift. Anybody who hopes a referendum can kill off Euroscepticism in the UK should look to the hopes in Scotland that a vote to stay in the UK would kill off the SNP. Euroscepticism is deeply embedded in British politics. A referendum will not change factors that drive it such as Britain’s late membership of the EU, historic feelings that joining was an abdication of a wider role, or long-standing media and popular portrayals of Europe as a hostile ‘other’. Tensions over Britain’s growing population, increasingly politicised identities – English, Scottish, Northerner, Londoner, Welsh – to say nothing of immigration, will not disappear from the debate about Britain’s links to Europe. The continued decline of two-party politics will allow space for parties such as UKIP. For Eurosceptics a vote to remain in the EU will be a tactical rather than strategic defeat, and they will regroup as underlying issues that drive the European debate in the UK refuel their support.

Eurosceptics will probably not have to wait long for a new opportunity to test the British peoples feelings. Hopes a referendum can fix once and for all a new UK-EU relationship – as David Cameron hopes he can negotiate and then put to the British people – are bound to fail because the vagueness of ‘ever closer union’ means the EU itself will continue to evolve. Any change that breached the UK-EU relationship would trigger calls for a new referendum, leaving Britain facing ‘neverendums’. If Cameron’s renegotiation risks antagonising the rest of the EU, then future ones will only add to frustrations that Europe’s ‘British Question’ refuses to go away. Any victorious referendum campaign to stay in the EU is also likely to fail in any bid to secure long-term support. Britons will likely vote to stay in the EU thanks to a campaign based on trade and jobs, of viewing EU membership as a means to an end for Britain’s wealth and standing in the world. That the EU is a political union will be played down, despite this being an undeniable end in itself. The growing appeal of emerging markets, which also draw the attention of countries such as Germany, will only add to questions about whether the EU is a means to the ends that Britain seeks.

This might seem to point to an exit vote as the simplest option, but withdrawal is far from a straightforward solution with acrimonious relations likely to follow in both British politics and UK-EU relations. Just as could happen with a vote to stay in, questions about what the British people were voting on – an unpopular government or leader rather than the issue of Europe – could hang over an out vote, especially if the majority is a slim one. The unity of the UK could be tested if areas such as Scotland or London voted to remain in the EU. So long as the EU is Europe’s predominant political, economic and legal organisation then it will stand accused by some in the UK of interfering in British life and failing to respect Britain’s sovereignty. Britain’s position in the world will remain unclear; dreams of splendid isolation from Europe ignore that Britain no longer has the imperial might that allowed it to do this during the nineteenth century. Whether it is globalisation or Europeanisation, Britain will remain under pressure to be open to the whole world. Immigration, as it has long been in British history, will remain a contentious issue.

Building a new external relationship with the EU will also add to Britain’s frustrations. Britain’s debate on leaving the EU often forgets a basic fact of any relationship: it’s not all about you. A relationship is two-way, even during or after a divorce. Britain cannot simply demand what is best for it and expect to get it all. What new relationship it secures will have to meet with the approval of the remaining 27 EU member states and European Parliament. Britain may find it is not happy with the deal offered by an EU changed by the withdrawal of one of its economically liberal minded powers.

It might seem paradoxical then to end by arguing that this should not rule-out an in-out referendum. It could help Britain better tackle its European question and the poisonous debates that so often surround it. Sadly, as things stand it seems inevitable that both sides will fail to recognise the complexity of the European question and therefore limit what they promise. Nor will they better manage the issue whatever the decision is. The poison will then return, meaning the referendum will have been nothing more than a placebo.

This oped is based on the article ‘To be or not to be in Europe: is that the question? Britain’s European question and an in/out referendum’ which appeared in the January 2015 issue of International Affairs, the Chatham House journal: http://onlinelibrary.wiley.com/doi/10.1111/1468-2346.12187/abstract ﻿