One million Labour voters who backed Brexit two years ago are having second thoughts. This emerges from a special analysis of YouGov surveys conducted this year. It shows that, below the surface, public opinion is stirring. Significant numbers of younger Leave voters, as well as those supporting Labour in last year’s election, no longer think Brexit is right for Britain.

That is not all. The effects of demographic changes since the referendum are growing. Bluntly, older, mainly Leave, voters are dying—and younger, mainly Remain, voters are joining the electorate. There is a real prospect that if the people were given the final say on Brexit, they would vote for the UK to stay in the European Union.

The data on the shifts in public attitudes comes from more than 23,000 voters that YouGov has questioned since the start of the year. Respondents are asked whether we were right or wrong to vote for Brexit in 2016. Thirteen of 14 polls this year show slightly more people saying “wrong” than “right.” This indicates a small but consistent net move away from Brexit. However, in any single survey, too few people are having second thoughts to analyse in any detail. This has led to the conventional wisdom that shifts among the electorate are minor and, therefore, politically unimportant.

We can now see that this view is incomplete. By combining the results from all 14 surveys, we can explore the views of different sections of the electorate. And while movements have indeed been small among many sections, they have been much larger in some politically important groups.

Consider Labour voters. They divided two-to-one for Remain in the referendum. The large number of Labour Leave voters in party strongholds in the North and Midlands is one reason why the Party leadership and some of its MPs are wary of proclaiming a pro-European stance. However, YouGov’s combined data, which includes 7,671 people who voted Labour last year, reveals a marked shift. While only 7 per cent of Labour-Remain voters are having second thoughts (changing their minds or saying “don’t know”), as many as 28 per cent of Labour-Leave voters no longer back Brexit. Now Labour’s voters divide almost three-to-one in saying Brexit was the wrong choice. Pro-European Labour MPs have less reason to fear the views of their constituents.

The table below contrasts the groups where second thoughts are most prevalent with those where voters are overwhelmingly standing firm. Apart from Labour-Leave voters, buyers’ remorse is greatest among voters under 40 who voted Leave, especially women and working-class C2DE voters. (Older women and working-class voters have shifted far less.) Of the major demographic and political groups, only among Conservatives are more than 15 per cent of Remain voters having second thoughts. 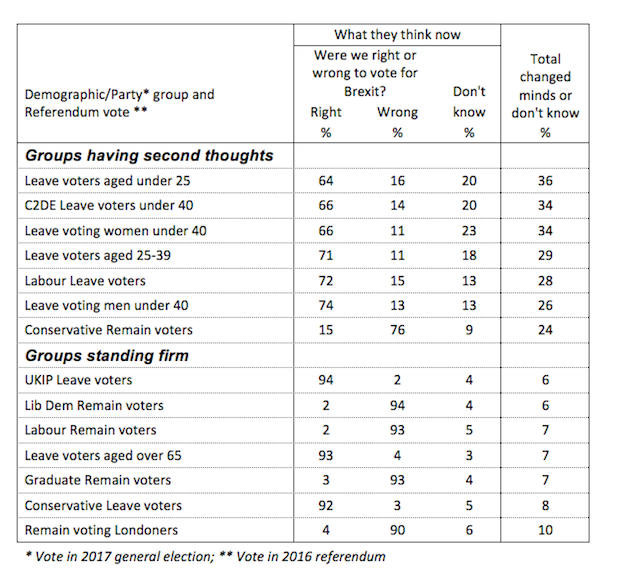 Just two really significant groups now favour Brexit more than they did: Conservative voters (from 72-28 per cent to 75-25 per cent in favour of Brexit) and voters over 65 (from 66-34 per cent to 67-33 per cent). In the case of the Conservatives, this reflects the fact that at the time of the referendum David Cameron, the Prime Minister, campaigned in favour of EU membership; today, Theresa May is strongly opposed to reversing the referendum decision. Given this change at the top of the Conservative Party, it is perhaps striking that the fall in pro-EU sentiment among Tory voters is only three percentage points.

The overall impact of all the shifts is to convert a narrow pro-Leave majority at the time of the 2016 referendum to a small pro-Remain majority today. That is not all. The analysis here of shifting views applies only to people who voted in 2016 and are still around today. It omits two groups: those who have died in the past two years, and those who have reached the age of 18 and joined the electorate since then.

Since the referendum around 1.2m electors have died, while 1.4m have joined the electorate. If we extrapolate from YouGov’s data from the youngest and oldest voters, and take account of variations in turnout by age, then I reckon that around 600,000 Leave voters, and 300,000 Remain voters have died; while 650,000 young Remainers and 150,000 Leave supporters have joined the voting population. Combine these figures, and these demographic factors have given us 350,000 extra Remain voters and 450,000 fewer Leave voters.

In the 2016 referendum, the 17.4m Leave voters outnumbered the 16.1m Remain voters by 1.3m. Demography has already reduced that lead by more than half. At this rate, Remain will take the lead by late next year, even if not one person changes their mind. Add in the second thoughts now apparent in some groups who voted Leave two years ago, there is a real prospect that a fresh referendum would reverse the decision that the electorate took last time.

Indeed, given the softness of the Leave support among Labour voters, it is possible that, IF there were a new referendum and IF the Labour Party campaigned actively to stay in the EU, then the Remain majority could be substantial. This would, of course, require Jeremy Corbyn to abandon his past views of Brussels, which have ranged from lack of enthusiasm to outright hostility. But a change in his stance would have the backing of almost all his party’s MPs and large majorities of party members and Momentum activists. If he needed further temptation to change tack, his backing for staying in the EU could help to inflict a huge defeat on the government.

* Technical note. YouGov’s total sample was 23,365. Voting data from these respondents was gathered at the time of the 2016 referendum and last year’s election. This makes the data more reliable than when people are asked months or years later how they voted in the past

This article was originally published in Prospect