Brexit - not the will of the people, nor is it likely to become so

Pre-referendum polls consistently pointed to a majority for Remain, even up to some polls on referendum day causing the UKIP leader to conceded defeat, that was until the results came in showing, ultimately, a 3.8% lead for Leave.  The final tally is well known: the electorate was 46,501,241, Leave was 17,410,742 and Remain was 16,141,241.

But polls taken a week or so after reversed that picture completely (see www.no2brexit.com). For example the BMGResearch poll, on June 29th gave Remain a 10.5% lead, well outside any suggestion of polling error.  Since then most polls  (so far 11 out of 13) have shown the UK electorate's preference to Remain. Although the Remain majorities are not as great as in the first weeks after the referendum, they are stable and likely to grow.

Since the referendum about 10% of both Leave and Remain voters have either changed their minds or cannot now decide whether their original vote was right. Certainly some of those who had voted Remain are now content to accept the Brexit train is on the track, whilst some Leave voters have the view that they wanted to give the government a good kicking over, for example, immigration, but actually quitting the EU and leaving the economy to float, or sink, may not, in their minds, be the best way to deal with the issue.

72.2% was an excellent turnout compared to a general election, but general elections are for five years, before you are guaranteed another vote, the Brexit referendum is for life, all the more so because to join the EU would mean joining the euro and that is not palatable to the UK. Only 26.5% of the UK population actually voted for Brexit. Some key groups had no vote such as the two million EU residents in the UK, despite having a vote in the Scottish referendum, paying taxes to the UK government and despite the question being one that could require them to leave.

12.9 million people did not vote.  It is well known that it is harder to get the electorate to vote if they think the result is both what they want and is a foregone conclusion.  That seems to have been the case because there has been an average13% majority in favour of Remain amongst the abstainers, since referendum day. 13% of the 12.9 million abstainers is 1.6 million, a majority sufficient to topple the 1.3 million Leave majority at the referendum. As time goes on, fewer abstainers are registering as Don't Knows, but the gap remains the same.   Abstainers seem to be becoming more sure of their preference. 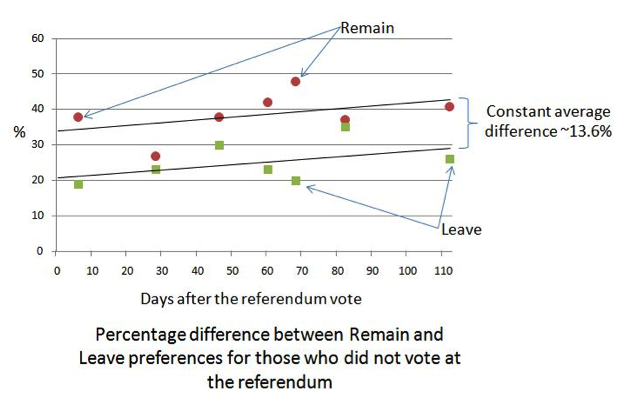 So when the preferences of the abstainers are added to the preferences of those who voted Leave and Remain in the first place, in all but two of 13 polls, the Remain camp win a majority.  It means that both the UK as a whole and the UK electorate does not and did not support Brexit.

There are two other considerations.  Firstly the groups who are angry at not being able to vote.  An NUS poll showed 75% of the 16-18 year olds wanted to vote.  Their vote, like that of the 18-24 group, would have been heavily for Remain.  EU (non-UK/Eire) citizens in the UK could not vote.  There are 2 million in the UK.  They too would be unlikely to vote for Leave. Crucially both those groups were able to vote in the Scottish independence referendum.  And finally UK citizens who have been out of the UK for more than 15 years, despite paying taxes to the UK, could not vote.  This was, in the words of one, taxation without representation.  If all were included it would add more than four million to the electorate, with the overwhelming majority voting to Remain.

Assuming the voting electorate stick with their votes for years to come, one study considered the 750,000 new 18 year-olds who will be new voters each year. They are balanced by a similar number of deaths, the vast majority over 65.   18-24s voted 75% to Remain, over 65's only 34% to Remain, so there is a 40% swing in the majority towards Remain every year, simply from the population, or about 300,000 new potential Remain voters per year.  The Financial Times modelled the change showing that even without the abstainers voting, the current 1.3 million Brexit majority reverses by the end of 2021.

With or without those groups, neither the UK as a whole, nor the UK electorate wants to leave the EU. And if the polls continue as they have over the last four months, the UK is unlikely to want Brexit for the foreseeable future.

Without discussing particular lies in the referendum campaign, or the readiness of some leading politicians to be, at least tacitly, on both sides of the fence or discussing any of the Brexit issues, it is democracy that loses out when a vote does not reflect the will either of the electors or the UK as a whole. Criticism has been fairly levelled at some abstainers, but this is such a monumental decision and, at least according to the polls, the will of the electorate as a whole, and the UK population as a whole is to Remain. This ‘will of the people’ should not be dismissed as valueless. Whatever we vote we are diminished if that happens.