A quiet revolution in EU own resources?

The EU budget has been stuck in the same pattern since the early 2000s. Member states provide the bulk (around 70%) of funding and some EU-level taxes, duties, VAT and other charges make up the rest.

The balance of income sources may change slightly from budget to budget – for instance, the share of customs duties that the EU collects, the size of rebates to member states or the precise level of member state contributions – but the sources themselves have not.

Combined with member states’ legal authority over the long-term budget, this has limited the potential for major fiscal action at EU level. Net contributor member states have typically been unwilling to stump up large amounts of extra cash or to allow the EU to raise substantial funds through its own taxes.

The Covid-19 pandemic, combined with the UK’s exit, has disrupted this status quo. The economic emergency has necessitated an unprecedented response at EU level.

In July, EU leaders agreed to collectively borrow €750bn – the scale of which has never been done before – to finance an economic recovery fund. This is in addition to the usual EU budget of €1.1trn for the next seven years.

For context, even this €1.8trn is dwarfed by the spending of large member states. For instance, according to Eurostat data, in the seven years to 2019 Germany spent €9.8trn and France spent €8.9trn.

The recovery fund is designed to help EU economies, especially the worst hit, not only recover from the crisis but adapt to a greener and digital future. Hamiltonian or not, it marks a major step in fiscal integration.

Paying for the recovery fund

Yet the more lasting and important changes may be in how this borrowing is funded, not just the amount.

Member state contributions to the EU budget are capped at a level agreed by EU governments. Previously, that cap was 1.2% of EU national income. This is now due to be lifted to 2%.

The treaties require that any EU borrowing can be financed from the EU’s resources, so the increase gives it the capacity to do so, regardless of any additional income streams.

But that does not mean that member states will necessarily stump up all this additional money themselves. There have been agreements in principle on new sources of EU funding, which could shoulder some of the burden. The Commission has said that this could cover the interest on recovery fund borrowing and even help pay back the principal.

At the July summit, EU leaders agreed on the first of these, a new EU-wide plastic packaging levy, to be implemented at the start of the next budget period, scheduled for 1 January 2021.

Four others – a digital levy, a carbon border tax, an extension of the emissions trading system to the aviation and maritime sectors, and a financial transactions tax – were also mentioned, subject to further negotiation.

That this plan was in the European Council conclusions and its importance stressed publicly by European Council President Charles Michel afterwards indicates reasonable support in EU capitals.

On 10 November, the EU Council and Parliament reached political agreement on the details of the budget, including a roadmap for introducing these new sources of income.

The Parliament has long been an advocate of more EU-level funding and the Council has long resisted such calls. The compromise reached, unsurprisingly, lies somewhere in the middle.

The Commission has committed to bring forward proposals by mid-2021 on an extension of the EU emissions trading system, a carbon border tax and a digital levy.

Other sources, such as a financial transactions tax or an EU corporation tax, have been kicked into the long grass. The Commission has given itself until mid-2024 to propose other new income streams which “could” include these two, but equally could not.

There is no guarantee any of these (except the plastics tax) will eventually be adopted, but a timeline for proposals is an important starting point.

The Commission estimates the plastic packaging levy – a charge on all non-recycled plastic packaging generated in member states - will bring in around €7bn a year, equivalent to less than 5% of the current EU budget.

There is little detail on the others, but the Commission has put some ballpark figures on them (to be taken with a large pinch of salt).

Its best guess is that an expanded emissions trading system would raise around €10bn per year, equivalent to around 7% of the current EU budget.

There is even less certainty with a carbon border tax, but the mid-range estimate, depending on design, is that it would raise around €10bn per year, equivalent to around 7% of the current EU budget.

A digital tax on large companies would bring in just €1bn per year. A financial transactions tax still seems some way off, so has been left out of this analysis.

All in all, these funding streams would be equivalent to around 20% of the current budget. 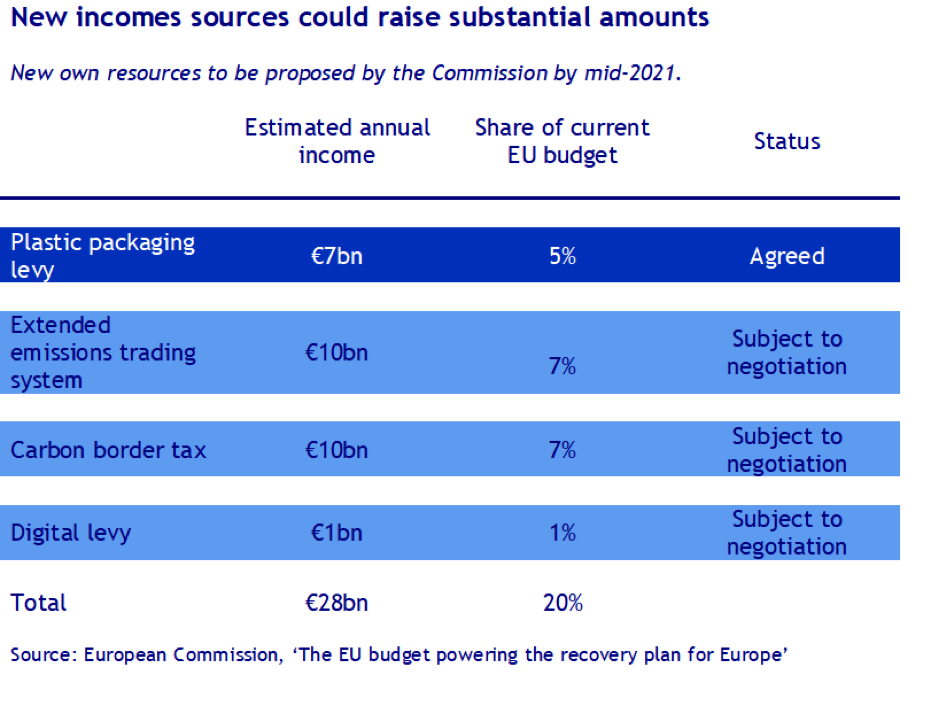 It is much to early to say whether any of these, beyond the plastics levy, will be adopted. That political battle will be fought in the middle of next year when the economic context may be very different.

Nevertheless, that they are being taken seriously offers a glimpse of a potential future. At a time when monetary policy is reaching its limits, using such income to fund further borrowing could be a formula that supports major EU-level economic intervention, ensures direct payments from member states do not rise drastically and begins to address some of the EU’s distributional questions. This could make the EU a major fiscal player where it has not been before.

Perhaps more than ever, there are compelling incentives to expand and diversify the EU’s income streams. But also, as ever, it is a question of political will.