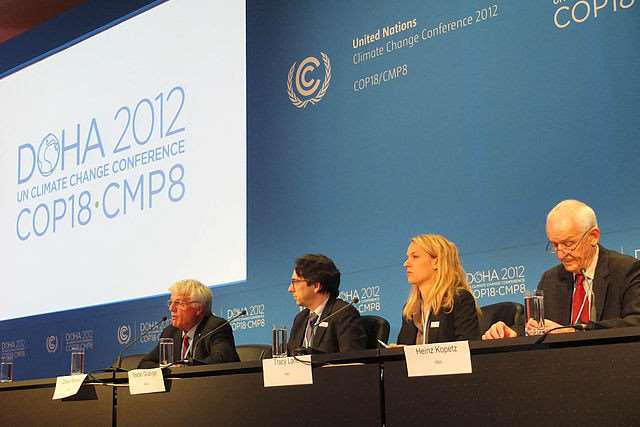 The last "Conference of the Parties" (COP). Photo: Wikimedia Commons

A new coalition between the EU and Latin America and the Caribbean (LAC) could be just the ticket to rejuvenate the UN climate change negotiations as they enter their third decade next week in Warsaw. This bi-regional partnership can serve as a vehicle to build momentum towards a fair, robust and ambitious agreement. All EU and LAC countries have expressed their will to adopt a new agreement by 2015, and surveys have repeatedly shown that their citizens are very concerned about climate impacts.

Together the two regions account for over one billion people, around 20% of global greenhouse gas emissions, and nearly a third of the 195 Parties to the UN Framework Convention on Climate Change (UNFCCC). Climate change and sustainable development are already central pillars of EU-LAC relations, and EU cooperation and investment in climate-related activities in Latin America and the Caribbean are considerable.

The timing is ripe, which could allow for greater consistency and continuity in a negotiating process that often lacks both. The next three Conferences of the Parties (“COPs”) of the UNFCCC will be held in countries from the two regions. Poland takes up the challenge this year, Peru will host COP20 in 2014 and France will host the COP21 in 2015.

EU and LAC countries have some very positive experiences of climate diplomacy to draw upon. The innovative informal discussion group called the “Cartagena Dialogue” included countries from both regions, and has been an important space for improving trust and building consensus. Mexico’s adept performance as the incoming President for the 2010 Cancun COP16 also provides a vital template for success, which could prove very useful for Peru and France as future COP presidents. Shrewd and careful diplomacy between Brazil and the EU was also instrumental in achieving progress at COP17 in 2011.

Even though the EU-LAC groups can cite some positive examples of cooperation on climate, a considerable portion of their trade and investment is based on polluting and carbon-intensive sectors. These activities may represent key sectors for both parties, but represent a major stumbling block to mainstream sustainability and climate change into the partnership.

This shared reliance on carbon intensive sectors makes EU-LAC leadership and experience all the more compelling in order to create a new climate deal that is both ambitious and realistic. Both regions are in the position to promote a new climate narrative calling for action by all countries, based on the key UNFCCC principle of Common but Differentiated Responsibility.

EU-LAC countries can also demonstrate how climate protection and economic growth can be complementary goals. Both regions have much to gain by capitalizing on the opportunity these next three COPs represent.  The Warsaw COP starting next Monday is a prime opportunity for these groups to work together in a bold new leadership alignment.

This article is based on a paper co-authored by Guy Edwards and Timmons Roberts and published by the EU-LAC Foundation which is available online here.