5G: The future is digital

Franziska Deeg and James Hoefnagels / May 2018

Europe’s history is rife with challenges and opportunities, and the recent history is no different, with recovering from the global financial crisis and currently attempting to resolve Brexit. While policymakers in Brussels, Berlin, Paris and Rome focus on populism and election meddling, there is another behemoth waiting to be tackled: that is digitalisation and automatisation. The newest mobile telecommunication technology generation, 5G, is being introduced in 2020 and will be a game changer for opening up more digital possibilities forcing the world to be even more connected. In the EU, its implementation could create 2.3 million jobs by 2025 and create revenue of €113.1 billion per year according to a study by the European Commission. Especially for the digital economy that can mostly be found on platforms like Uber, Upwork, Freelancer etc. will be greatly influenced by the technology. It will be easier for people to pursue new types of working that are currently unknown. However, this is only possible in a world in which vastly more people have digital skills and the knowledge to use those platforms.

Statistics by the European Union show a striking picture: 41% of individuals living in the EU have no or only low digital skills (see Figure 1, the number corresponds to the EU28 average). This is dramatic since, in the future, technology will be everything and everywhere. With more and more automatisation of assembly lines, artificial intelligence answering increasingly difficult customer requests and vast opportunities waiting online not only regarding work but also learning; there will be no job in the future that will not be affected by some technology. This is partly visible now since 33% of employers indicated that they have issues filling positions that require digital skills, as was found in a study by the World Economic Forum. Further, the gap is continuously widening.

Figure 1: Digital skills of the EU population, 2015 (% individuals, by the level of skills) 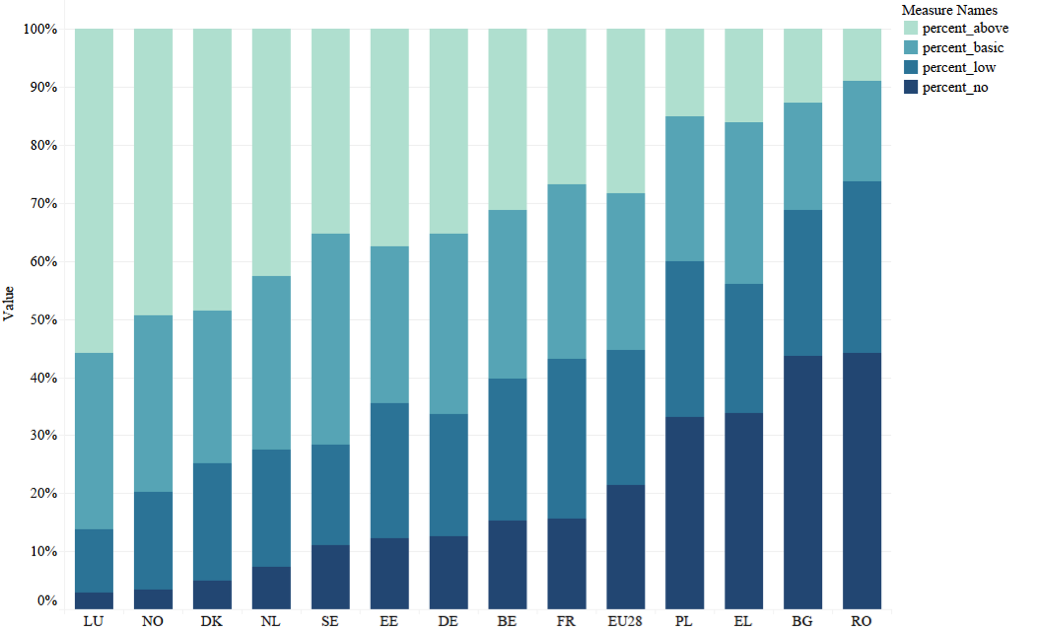 Source: Own elaboration based on European Commission (2015)

To fully use the potential of the new and emerging technologies, the governments of EU Member States should work closely with the private sector. For that, the EU Member States can follow the example of the Netherlands in which the digital skills of the population are higher on average. Furthermore, in the Netherlands, more people are endowed with basic and above basic skills, as can also be seen in Figure 1. In 2013, different stakeholders from the public and private sector signed one of the most comprehensive technology pacts in the EU, which focus on students as well as the current labour force and recognise the need for reskilling and skill endowment starting from an early age. Their holistic approach encompasses an increased use of ICT in schools and universities, as well as it urges companies to invest in the skill development of their staff. This is a solution that could be replicated in the entire EU. Firstly, employers need to be aware of the pressing need to invest in the digital skills development of their employees and should offer training for all different kinds of workers. By bringing the public and private sector together in a technology pact, the first step is taken towards a sound digital development in the future.

Secondly, it is necessary to raise awareness for job opportunities waiting for young people in the technology sector. Especially when it comes to data workers who collect, store, manage and analyse data, the demand will greatly increase (and is already higher than the supply by 6.2% according to a study by the consulting firm International Data Corporation (IDC)). Policymakers should put a strong emphasis on this profession by providing university programs and digital education in school. The majority of young people are digital natives that grow up with technology having a great influence on their lives. The EU Member States should make use of that potential that will not only bring the economy further but will increase the innovation potential of the European countries which will ensure a competitive advantage in the long run.

The vast economic potential that goes hand in hand with the implementation of 5G is indisputable. Now it depends on decision-makers in the public and private sector if this opportunity will be used to its fullest. The challenges and vast opportunities of digitalisation and 5G should be on top of the agenda if the EU member states want to make steady progress.

For more information or to contact the authors of this article, use the following email address: projectgroup.wbs@gmail.com or access the policy briefs on which the articles are based on under the following link: http://bit.ly/2GtCFAy

The views expressed in this article are those of the authors and do not necessarily represent the views of the Willy Brandt School of Public Policy or ECIPE.